Briggs: In spurning Miami, Jason Candle makes massive bet on himself and Toledo 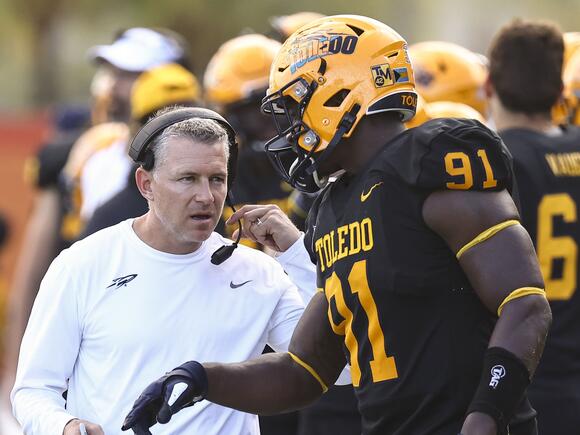 I don’t know if the University of Toledo will have a great football team next season.

But I do know one thing.

Jason Candle believes it will.

For that reason, Rockets fans — no shortage of whom were ready to pack Candle’s bags for him — should be excited today.

With the Toledo coach opting to stay put rather than take his talents to South Beach to become the highly paid offensive coordinator at Miami, he’s betting on himself, his coaches, and his players.

And he’s pushing all of his chips to the center.

You have to admire that.

With less than two years remaining on his contract and a new athletic director coming in, Candle could have easily bailed on the uncertainty.

Could have easily decided a ride into the sunset was no longer likely at Toledo and headed for the sunshine, one step ahead of the posse.

Sure, leaving to become a coordinator at a power-conference program might have seemed counterintuitive on its face, given that mid-major schools are supposed to be springboards to big-time head coaching jobs, not stairs down to deputy posts.

But the appeal of Miami — which came at Candle with a deal worth $1.5 to $1.8 million per season, per sources — was easy to see.

As much as we all love Toledo, it’s not every day that someone turns down a half-million-dollar raise to move to Florida.

Miami offered more money, less pressure, and a new challenge with an old friend (Candle and Hurricanes coach Mario Cristobal have the same Chicago agent, Bryan Harlan), to say nothing of a potentially better pathway to a top job at a major program. If Candle, 42, succeeded at Miami, he would have been right back on the rising-star track he was a few years ago, a prime candidate in no time.

Also, let’s face it: There’s something to be said for being wanted.

And, while Miami wanted him — as did its fans, enamored by his reputation as a bright offensive mind — his honeymoon here ended years ago.

Even the UT administration was in no position to fight to keep him.

I’m told that Candle hoped the offer from Miami could spur Toledo to offer an extension, but university president Dr. Gregory Postel was not on board, and understandably so. For one, extending the coach after four straight seasons out of Mid-American Conference contention would have set off a small revolt. For another, Postel isn’t inclined to authorize any high-dollar new contracts before the next athletic director is in place.

(Remember, here’s what he said last year after declining to sign off on an extension for men’s basketball coach Tod Kowalczyk, who is under contract through the 2024 season: “With Mike [O’Brien] retiring [in] April and a new athletic director coming, I didn’t feel it was fair to the incoming person to not have a vote in whether a major coaches contract was extended for a long period of time.”)

And yet, given all that, Candle still decided to stay.

If he’s that high on his football team — and he likes it here that much — I call this a win for Toledo.

Maybe you disagree, which is fair.

While Candle has done a lot of good in his 13 years at Toledo — including the past six as a head coach — the facts are the facts. Last season, Toledo committed more penalties per game (10) than any college football team had since 2005, and lost six games for the third straight non-pandemic season.

For some fans — at least those in my inbox — the final straw was the Rockets’ 31-24 loss to Middle Tennessee State in the Bahamas Bowl, after which Candle seemed to downplay the frustrations of the Toledo fan base.

It wasn’t disappointing to fans?

That was certainly news to the people whose interest in his program allows him to make a lot of money to be in charge of an entertainment product.

Candle — who did not return messages from The Blade — is a good guy who did not mean to come off as arrogant and out of touch, but if I could offer one unsolicited bit of PR advice: It would go a long way to show a little humility and say simply, “As disappointed as I know our fans are, we’re even more so. We’ll be working like crazy to get this right.”

But, hey, the past is the past, water under an Ottawa River bridge.

To fans, the only thing more important than what a coach has done for ’em lately is what he’ll do for ’em next.

And, clearly, Candle believes he has unfinished business at Toledo, where next season he will have the full harvest of five straight league-best recruiting classes and a promising quarterback in Dequan Finn.

He’s making the bet of his coaching career on it.

Good for Candle. Good for Toledo.