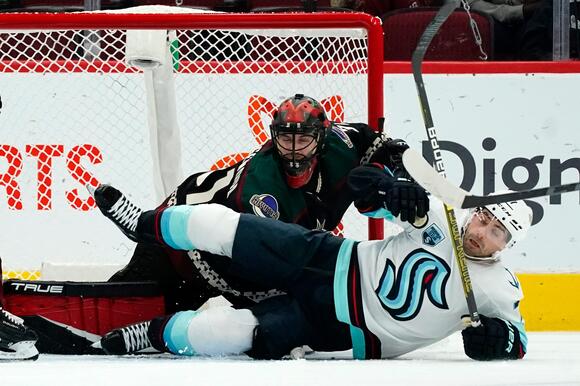 The National Hockey League on Wednesday announced scheduling updates for the 98 games postponed between mid-November and Jan. 18, including the new dates for five previously postponed Arizona Coyotes games and one date change for a game that has yet to be played.

The Coyotes will play five rescheduled games in February including road games  Feb. 8 at Vancouver and Feb. 9 at Seattle, and home games Feb. 11 against Tampa Bay, Feb. 19 against Los Angeles and Feb. 20 against Dallas. Four of those games were originally scheduled to be played in December, and the Dallas game in early January.

Additionally, the Coyotes' home game against the expansion Seattle Kraken on March 23 was moved to March 22. Television broadcast information for all rescheduled games will come from the NHL at a later date.

The league hopes all 32 teams can finish an 82-game regular season by the season-ending date of April 29. The NHL, as expected, is taking full advantage of the previously scheduled Winter Olympics break from Feb. 6-22 that was installed before the season to allow all of the NHL players on Olympic teams to compete for the respective countries.

However, the league lost dozens of games to COVID-19 cases among players and staff in the past two months, and four days before Christmas pulled out of participation in the Olympics.

So with no Olympics, regular season games will resume right after the NHL All-Star weekend of Feb. 4 and 5.

Game times for the Canucks and Kraken games on Feb. 8 and 9 are 8 p.m. Phoenix time, then 7:30 at home against the Lightning, 7 p.m. against the Kings (after a full week without playing) and 5 p.m. on Feb. 20 against the Stars.

The Coyotes announced on Twitter that anyone with tickets for the postponed games will have their tickets honored for the rescheduled date, and that if the new game date does not work for anyone, to reach out to where they were purchased to discuss exchange options.

Get in touch with Jose Romero at Jose.Romero@gannett.com . Find him on Twitter at @RomeroJoseM.

The Pac-12 is holding a 2022 Pac-12 Baseball Tournament with the top eight teams in the conference in Scottsdale this week. Stanford is the No. 1 seed, followed by Oregon State at No. 2. UCLA is the No. 3 seed and Oregon is the No. 4 seed. Arizona is seeded No. 5, with California...
SCOTTSDALE, AZ・1 DAY AGO
AZCentral | The Arizona Republic

Deandre Ayton's agent, Bill Duffy, says "things will work out" for his client. Will it be with the Phoenix Suns or someone else, though? Duffy spoke with Justin Termine and Suns...
PHOENIX, AZ・1 DAY AGO
AZCentral | The Arizona Republic

May 24 (UPI) -- NFL owners and league officials are discussing the future of the annual Pro Bowl game at this week's league meetings. NFL Commissioner Roger Goodell confirmed Tuesday that the league has talked with players and teams and is now exploring alternatives to the Pro Bowl and its week of events, which could include the elimination of the traditional tackle game.
NFL・1 HOUR AGO

The No. 1 seed Miami Heat and No. 2 seed Boston Celtics face off on Monday at TD Garden in Boston in Game 4 of their NBA Playoffs series. The game is scheduled for 5:30 p.m. MST and can be seen on ABC. Who will win the game? ...
BOSTON, MA・2 DAYS AGO
AZCentral | The Arizona Republic

The Cardinals have played the Lions 17 times since 2001 and although the two teams won’t meet this season, they’re tied to each other yet again — both will be featured on HBO’s “Hard Knocks.” In March, it was announced the Lions would be showcased by HBO Sports and NFL Films for an unfiltered,...
GLENDALE, AZ・1 DAY AGO
AZCentral | The Arizona Republic

The Arizona Cardinals Twitter account posted photos of Trey McBride in a Cardinals uniform over the weekend with the caption "can get used to this" along with a fire emoji. We're guessing the intent of the post was to show off the rookie tight end in the uniform in order to excite fans. The...
GLENDALE, AZ・1 DAY AGO

Arizona vs. Mississippi State in NCAA softball Super Regional: Schedule, how to watch

The Arizona softball team will face Mississippi State on the road this weekend in the Super Regional round of the NCAA Softball Tournament with a berth in the Women's College World Series on the line. Arizona advanced by winning the Columbia Regional, which also included No. 15 Missouri, Illinois and Missouri State. Mississippi State...
ARIZONA STATE・9 HOURS AGO
AZCentral | The Arizona Republic

Four consecutive losses wasn’t how Arizona State wanted to end the regular season, but the Sun Devils were still able to finish within the top eight teams to qualify for the inaugural Pac-12 Baseball Tournament in Scottsdale.  The good news for ASU is that the team will get a fresh start to the...
SCOTTSDALE, AZ・5 HOURS AGO
AZCentral | The Arizona Republic

Moore: My friend and I disagree on Deandre Ayton's contract situation with Phoenix Suns

A good friend of mine is a lifelong Suns fan. He goes back way further than Nash and Stoudemire or Barkley and Majerle. We’re talking Hawkins and Scott. Van Arsdale and Westphal. And we’re talking about a championship drought that goes back to 1968-69. ...
PHOENIX, AZ・5 HOURS AGO
AZCentral | The Arizona Republic

The Arizona Cardinals' Kyler Murray is not expected to be at organized team activities this week, per a report from ESPN's Adam Schefter. "Cardinals’ QB Kyler Murray will not be at Arizona’s OTAs this week, as expected," Schefter tweeted Monday morning. "All continues to remain quiet on his contract front, for now." Murray was...
TEMPE, AZ・1 DAY AGO
AZCentral | The Arizona Republic

Arizona football win total odds: Will Wildcats go over or under Vegas' projection in 2022?

Some odds have been released for Arizona's win total in the 2022 season and they might seem a little low to some fans of the Wildcats. BetOnline puts Arizona's over/under for the upcoming season at 2.5 games. Jedd Fisch's team also opened at 2.5 wins in odds from the same site last season. The...
TEMPE, AZ・12 HOURS AGO
AZCentral | The Arizona Republic

The Phoenix Suns should feel sick to their stomach seeing Golden State being a win away from reaching the NBA Finals. The Suns took two from the Warriors in the regular season and would’ve had homecourt advantage had they met in the Western Conference finals. ...
PHOENIX, AZ・1 DAY AGO