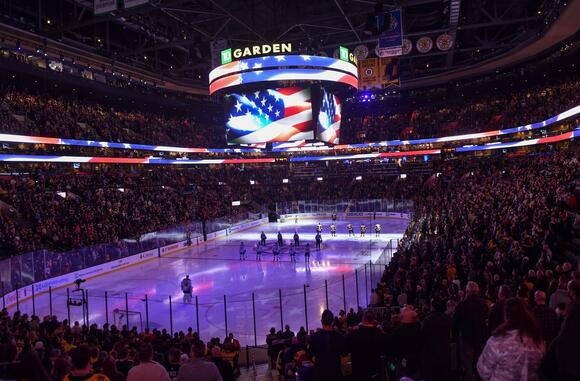 As expected, the three-week break the Bruins had in February -- originally scheduled for the Olympics -- has been filled in.

On Wednesday, the NHL announced new dates and times for nine Bruins games, including the seven they had postponed in December and January due to COVID-19.

Five of those postponed games will now be played in February. One has been moved to March and one to April. Two games originally scheduled for March and April have been moved up to February so as not to make an already crowded March/April schedule even more hectic.

The NHL All-Star break is scheduled for the weekend of Feb. 5-6.

Boston Bruins players held their “breakup day” media availabilities on Monday. Here are some of the key takeaways, including an emotional David Pastrnak and an upcoming surgery for Matt Grzelcyk.
BOSTON, MA・6 HOURS AGO
WEEI Sports Radio

Patrice Bergeron shoots down possibility of playing for another team

Boston Bruins captain Patrice Bergeron told reporters on Monday that he cannot see himself playing for any other team. Bergeron is currently deciding whether to play a 19th NHL season or retire.
BOSTON, MA・21 HOURS AGO
WEEI Sports Radio

Jake DeBrusk mum on trade request, but would be ‘OK’ with staying in Boston

During his “breakup day” media availability, Jake DeBrusk said he would have to take some time to think about whether he still wants to be traded, but added that he wouldn’t have signed an extension if he wasn’t “OK” with remaining a Boston Bruin.
BOSTON, MA・19 HOURS AGO
WEEI Sports Radio

How Game 5 collapse could help Celtics vs. Heat and beyond

The Bucks put the Celtics through some tough tests — one in particular that could help Boston in the Eastern Conference Finals vs. the Heat.
BOSTON, MA・1 DAY AGO

After crushing the Milwaukee Bucks in Game 7 on Sunday, the Boston Celtics will now face the Miami Heat in the Eastern Conference Finals. Here is the full schedule for the series.
BOSTON, MA・1 DAY AGO
WEEI Sports Radio

The Boston Celtics and Milwaukee Bucks are slated to tee off in a Game 7 at TD Garden Sunday afternoon, with the C’s social media team helping its fans get ready in fine fashion.
BOSTON, MA・2 DAYS AGO
WEEI Sports Radio

Big test over for Celtics, time to make quick work of Heat

Payton Pritchard shouting ’that’s what I do!’ after nailing a game-clinching 3 was iconic

Boston Celtics guard Payton Pritchard couldn’t contain his excitement after hitting a game-clinching 3 Sunday against the Milwaukee Bucks. He taunted the Bucks’ bench, and it was iconic.
BOSTON, MA・1 DAY AGO

The Boston Celtics’ locker room celebration after their series-clinching Game 7 win over the Bucks was highlighted by the entrance of Grant Williams.
BOSTON, MA・1 DAY AGO
WEEI Sports Radio