Mike McCarthy Doubles Down on Defense of Cowboys Final Play 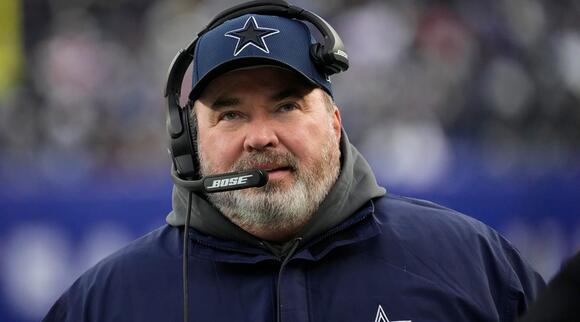 He says 13 seconds was the threshold for a run in that situation.

During his end-of-season press conference Wednesday, Cowboys coach Mike McCarthy doubled down on his team's decision to run a quarterback draw at the end of Sunday's wild-card game against the 49ers.

“It's the right call,” he told reporters .

He also said the threshold for a run was 13 seconds.

In the fourth quarter of the game, Dallas elected for a designed quarterback run with Dak Prescott, with just 13 seconds left in the game and down six points at the 40-yard line. Prescott ran for the first down and more, but the clock continued to run and he couldn't get the snap off in time on for another play.

After the game, McCarthy said they had practiced the play each week and he was surprised they didn't get the next snap off in time. There was also controversy over the referee's role in the situation. After Prescott was tackled, he quickly gave the ball to center Tyler Biadasz to start the next play. But per NFL rules, an umpire must properly set the ball. The official came charging into the line of scrimmage, collided with Prescott, and placed the ball before they could get the snap off in time.

Referee Alex Kemp explained that the official spotted the ball properly and there were no mistakes from the officiating crew. During Wednesday's press conference, McCarthy said Biadasz was looking to give the ball to the umpire, but he was nowhere to be found.

For more Cowboys news head over to Cowboy Maven .

The Raiders could decide to sign Colin Kaepernick.
PARADISE, NV・10 HOURS AGO
Yardbarker

Jerry Jones: CeeDee Lamb is an upgrade over Amari Cooper

Dallas Cowboys owner Jerry Jones was clearly ready to move on from star wide receiver Amari Cooper. Shortly after Dallas' home playoff loss to the San Francisco 49ers in January, Jones expressed his frustration with Cooper's performances via comments that served as a predictable preview of what was to come. The Cowboys traded Cooper to the Cleveland Browns in March and then never replaced him with a big-name acquisition, and those decisions left CeeDee Lamb as Dallas' new No. 1 player at the position.
DALLAS, TX・30 MINUTES AGO

The Lakers legend has only appeared on ESPN once this entire NBA season.
LOS ANGELES, CA・2 DAYS AGO
Sports Illustrated

The former star running back took his wife’s last name and explained why.
NFL・2 DAYS AGO
Sports Illustrated

He hasn’t played in the NFL since 2016.
NFL・2 DAYS AGO
Sports Illustrated

The tryout is a trial balloon for the rest of the NFL, which may finally lead to an opportunity to make a roster.
LAS VEGAS, NV・2 DAYS AGO

Source: McDaniels, Ziegler Expected to Be at Kaepernick’s Workout

The quarterback is working out with the Raiders later Wednesday afternoon at the franchise’s facility.
LAS VEGAS, NV・2 DAYS AGO
Sports Illustrated

The dates, times and locations for every bowl game this upcoming season has been released.
MLB・1 DAY AGO
Sports Illustrated

Cowherd previously stated that Steph Curry would never appear in another NBA Finals as a member of Golden State.
NBA・1 HOUR AGO

J.J. Watt Has a Doughnut Dilemma, and We Need to Break It Down

Does he have a right to complain about free doughnuts?
NFL・8 HOURS AGO
Sports Illustrated

The Bucs quarterback caused quite a stir with his latest social media post.
NFL・2 DAYS AGO
Sports Illustrated

Bazemore Regrets Leaving Warriors After They Earned a Spot in Finals

The Pelicans announced their star forward has been medically cleared to play.
NEW ORLEANS, LA・1 DAY AGO
Sports Illustrated

The ESPN radio hosts are preparing for a two-on-two challenge.
DURHAM, NC・1 DAY AGO
Sports Illustrated

The Miami guard has missed the last two games with a groin injury.
MIAMI, FL・56 MINUTES AGO