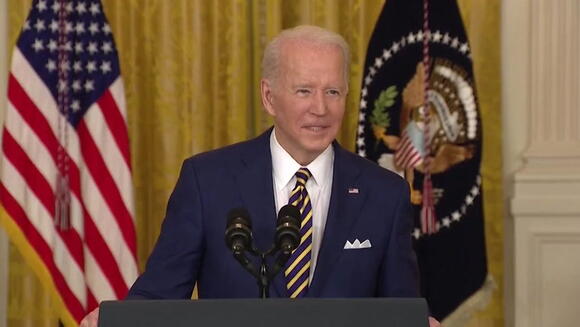 President Joe Biden on Wednesday hit out at Republicans for acting to block his agenda without offering any alternative solutions to the problems his administration is trying to address.

Speaking at a White House news conference on the eve of his one-year anniversary in office, Mr Biden told reporters he was caught off guard by the vehemence of the GOP’s opposition to anything and everything he has proposed, and by their singleminded effort to ensure his presidency fails.

"I did not anticipate that there would be such a stalwart effort to make sure the most important thing was that President Biden didn't get anything done," Mr Biden said. "What are Republicans for? What are they for?"

Mr Biden’s outing in the East Room was the second formal White House news conference of his presidency.

It took place on the same day his Democratic allies in Congress are set to make a doomed attempt to move a voting rights bill through the same Senate that has so far been unable to pass his signature Build Back Better social spending package.

Under questioning from reporters, Mr Biden said Senate Minority Leader Mitch McConnell has been “very clear” about his desire to do “anything” to keep his administration from succeeding.

Returning to his previous theme, the president said the “fundamental question” voters should ask before voting for Republican candidates to give Mr McConnell control of the Senate majority is: “What is Mitch for ... what is he proposing to make things better?”

“Everything is a choice,” he added.

The scant polling out of the western state shows the incumbent Republican trailing her top challenger by double digits.
WYOMING STATE・1 DAY AGO
Daily Mail

A veteran Russian legislator has issued an appeal to Vladimir Putin to stop military action, bring his troops home and end the war in Ukraine. Communist deputy Leonid Vasyukevich, 69, blasted the use of Moscow’s servicemen in Ukraine, as a Russian court dismissed more than 100 national guardsmen in the first case of soldiers refusing to fight in Ukraine as politicians demanded the army return home.
POLITICS・1 DAY AGO
The Drive

microchips in Russian weapons captured in ukraine.Ukraine intelligence showed us lists of mostly U.S.-made microchips it says were found on captured or destroyed Russians military equipment.
MILITARY・1 DAY AGO
The Independent

Donald Trump has been slammed for dancing after reading a list of those who died in the Texas school shooting. The former president spoke at the convention of the National Rifle Association (NRA) and danced to the 1966 song Hold On, I’m Comin’ by Sam and Dave after his speech, during which he read out the names of those who died in Uvalde on Tuesday. He argued that teachers should be armed to be able to defend themselves and their students. Critics blasted Mr Trump for his “disingenuous” suggestions and the dancing following his address. “Trump danced at the...
UVALDE, TX・15 HOURS AGO

Far-right favorite Kandiss Taylor received just 3.4 percent of the vote in Georgia’s GOP primary for governor on Tuesday, less than one-twentieth of current Gov. Brian Kemp’s 73.7 percent of the vote. But that isn’t stopping Taylor from refusing to concede and claiming the election was “rigged.”
GEORGIA STATE・1 DAY AGO
Newsweek

Herschel Walker's Chances of Beating Raphael Warnock, According to Polls

The Trump-backed Republican appears to be polling narrowly ahead of the Democratic Senator Raphael Warnock in Georgia.
GEORGIA STATE・2 DAYS AGO
Fox News

On Thursday, the former president said he would have shunned his former campaign manager had he known that "she thought we lost the election."
PRESIDENTIAL ELECTION・2 DAYS AGO

Sen. Ted Cruz (R-TX) abruptly walked off from a British journalist’s questions about gun violence in America two days after an elementary school massacre in his state left 19 children and two adults dead. Cruz, who is due to appear at a National Rifle Association convention this weekend, became...
CONGRESS & COURTS・2 DAYS AGO
Business Insider

"As if he were covering the fall of the Berlin Wall in 1989 or the building of the border wall in 2019, Wallace asked me a question about my husband," she said.
CELEBRITIES・16 HOURS AGO
Newsweek

O'Rourke has harshly criticized Governor Greg Abbott following the killing of 21 people at an elementary school.
19 HOURS AGO
The Independent

A Republican senator offered up a theory for why he believes school shootings, like the one in Texas that left 19 children and two teachers dead this week, are on the rise: “wokeness” and “liberal indoctrination”.Wisconsin Sen Ron Johnson provided the controversial take during an interview with Fox Business Network on Thursday, after the host asked, in light of this week’s devastating shooting at an elementary school in Uvalde, if stiffer background checks would be a solution for preventing this kind of mass slaughter. Particularly so, the host noted, since 18-year-old shooter Salvador Ramos legally bought two AR platform...
UVALDE, TX・22 HOURS AGO

‘All this suffering because of a madman’: Putin’s forces intensify attacks in bid to seize the Donbas

“No mother should have to watch her daughter die. No mother should have to piece together her daughter’s body. They killed her, they broke my heart, they broke the hearts of our family.”Vera Ivanova is inconsolable in her grief. Her daughter, Nataliya, died in a bombing in Sievierodonetsk — one of two cities, along with Lysychansk, that the Russians are trying to capture to complete their seizure of the Luhansk region in the fierce battles of eastern Ukraine. Having failed to capture Kyiv or Kharkiv, the focus of Vladimir Putin’s forces is now on the east of the...
POLITICS・21 HOURS AGO
The Independent

Boris Johnson has struck a gloomy note on the war in Ukraine, warning that Russia’s president Vladimir Putin is making “palpable progress” in his bid to seize the eastern Donbas region.The prime minister said Western states should not be “lulled” by the early Ukrainian successes around capital Kyiv into thinking that the threat from Russia had been overcome.He said it was “absolutely vital” for countries like the UK to keep supporting president Volodymyr Zelensky’s regime with military supplies.Speaking to Bloomberg TV, Mr Johnson said: “I think it’s very, very important that we do not get lulled, because of the incredible...
POLITICS・1 DAY AGO
The Independent

Republican congressman Chris Jacobs of Orchard Park, New York has reversed his stance on gun control and said he would support measures to ban or restrict access to guns.Mr Jacobs, who was endorsed by the National Rifle Association (NRA) only two years ago, made the comments in the wake of deaths from mass shootings in Buffalo and Uvalde.Mr Jacobs, who has served on the Buffalo Public Schools board, said he would support measures including banning access to semiautomatic rifles like AR-15s and increasing the minimum age for firearm purchase to 21, contrary to the GOP’s staunch stance on gun...
BUFFALO, NY・3 HOURS AGO
The Independent

Ukraine leaders have repeated a call for US-made long-range multiple-rocket launchers to defend against strengthening Russian attacks. “It is hard to fight when you are attacked from 70 km away and have nothing to fight back with,” Ukrainian presidential adviser and peace negotiator Mykhailo Podolyak posted on Twitter.“Ukraine can return Russia behind the Iron Curtain, but we need effective weapons for that.”President Volodymyr Zelensky voiced hopes that Ukraine‘s allies would provide needed weapons, adding that he expected “good news” this week.US officials said such systems are actively being considered.Meanwhile, Mr Zelensky said the military situation in the Donbas was...
MILITARY・4 HOURS AGO