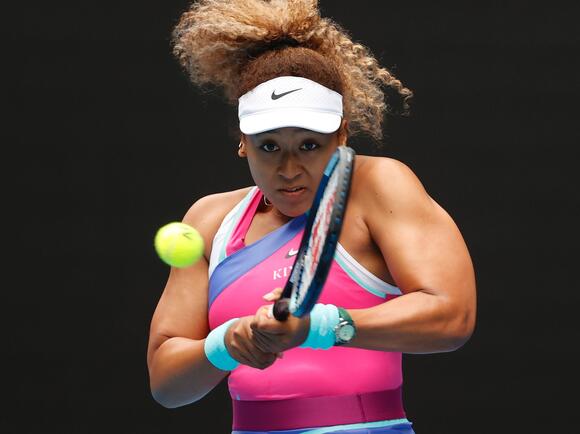 Naomi Osaka is one of the most powerful competitors in women's tennis.

The right-handed 24-year-old boasts a serve that can reach speeds up to 125 miles per hour, and her forehand can register three figures on the radar.

But as she's gotten older and gained experience on the tennis circuit, the four-time Grand Slam champion has increasingly shied away from using the hardest hits in her arsenal.

"I only try to do those shots if I'm 100% sure it'll go in, so that's why I don't really do it that often," Osaka explained during her post-match press conference during the second round of the Australian Open. "And that's probably why I did it a lot when I was younger."

One particular shot from her swift 6-0, 6-4 victory over American Madison Brengle on Wednesday prompted questions about how she harnesses her power. Up three games in the first set, Osaka drilled a forehand return 130 kph — or 80.8 miles per hour — just inside the doubles alley and shallow of the baseline to put herself up four games to nil.

The absolute bullet spurred one reporter to ask Osaka if she's ever tempted to hit the ball with all her might.

"I could try it, but it probably wouldn't go in," Osaka said with a laugh.

"I don't really feel a need to attempt those shots as much right now because I'm trying to build... a better tennis IQ," she added. "I want to win the point. I want to be sure that I'm gonna win the point instead of risking it a little bit."

Even with some extra caution these days, Osaka registers some of the fastest shots in the pros. On Day 3 of the Australian Open, the reigning champion recorded a 147.3 kph — or 91.5 mph — a return that ranked fastest among all the women at the tournament.

Osaka will look to find the right balance between power and finesse when she takes on American Amanda Anisimova on Thursday. Should she win, Osaka could be faced with a megawatt fourth-round showdown against Ashleigh Barty — the Australian world No. 1 who won Wimbledon last year.

Just 19, Carlos Alcaraz, tennis' next big thing, plays like Federer, has won more than $5 million, and has the French Open title in his sights

The Spanish teenager has already won four titles this year and now has his eyes on winning the French Open.
TENNIS・6 HOURS AGO
Insider

Anderson Silva's post-UFC career is thriving as he took apart another exhibition opponent and is showing he'd be the perfect foil for Jake Paul.
COMBAT SPORTS・2 DAYS AGO
Insider

Even from halfway to midfield, Amandine Henry placed the ball perfectly in the upper-90 of the goal to beat Barca's keeper and open scoring for Lyon.
SOCCER・1 DAY AGO
Insider

Fritz said he typically gets a Chipotle bowl as a post-training meal, and that it "has got everything."
TENNIS・8 HOURS AGO
Insider

Mito Pereira played perfect golf for 71 holes and then lost $1.8 million on one bad swing at the PGA Championship

Mito Pereira's final hole at the PGA Championship was heartbreaking to watch, and cost the Chilean pro nearly $2 million in winnings.
GOLF・1 DAY AGO
Insider

Christiane Endler became the first player from her country to win a Champions League title, but the feat came on the same day her mentor passed away.
UEFA・9 HOURS AGO
Insider

Atsamaz Tebloev is facing expulsion from the International Wrestling League of Poddubny, after throwing an illegal shot, a punch, at a rival in the middle of a match.
COMBAT SPORTS・5 HOURS AGO