'Dixie' Dörner, the 'Beckenbauer of the East,' dies at 70 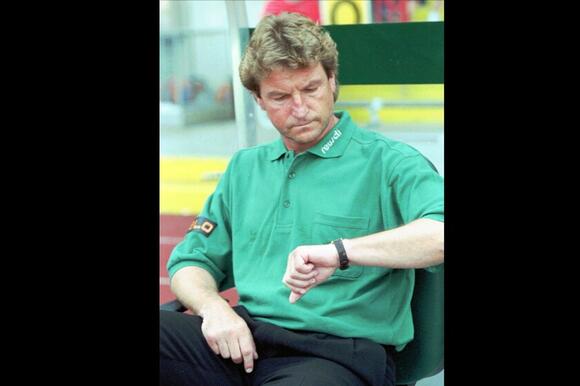 Hans-Jürgen “Dixie” Dörner, one of East Germany and Dynamo Dresden’s greatest soccer players who was called the “Beckenbauer of the East,” has died. He was 70.

The Dörner family said Wednesday that the former defensive all-rounder died the night before at home in Dresden after a long illness.

Dörner was first likened to Bayern great Franz Beckenbauer when Dynamo faced Bayern Munich in the second round of the 1973 European Cup. Dörner never liked the comparison, though it was unavoidable due the similarity of their libero playing styles.

Like Bayern’s “Kaiser,” Dörner was intelligent and technically brilliant, with a good eye for space and teammates’ movement. He directed Dynamo’s play with his passing and play.

Dynamo announced 10 days of mourning for the player who made 558 appearances and scored 101 goals across all competitions for the club between 1969-86. He helped Dynamo to five East German league titles and five East German cups.

He captained the team from 1977 until his retirement and was voted the club’s greatest-ever player in 1999.

“It’s incomprehensible, shocking and very, very sad,” Dynamo president Holger Scholze said. “We still can’t believe that Dixie Dörner is no longer with us. His death brings deep sadness to our sports community. With Dixie Dörner, we not only lost the greatest player in the history of the club – we also lost a person who had conquered all of our hearts.”

Dörner played 100 games for East Germany and helped the country to gold at the 1976 Olympic Games in Montreal. There was formidable opposition, including France, which had Michel Platini in the team. Brazil had Léo Júnior while the Soviet Union had standout forward Oleg Blokhin.

But Dörner was arguably in the form of his life, and he scored four goals to help East Germany win gold.

Dörner missed East Germany’s only World Cup appearance in 1974 due to jaundice.

“With his outstanding skills as an exceptional player, he completely reinterpreted the libero-game with special elegance,” Scholze said. “His commitment to the interests of our sports community after his playing career is just as noteworthy.”

Dörner turned to coaching after his playing career, initially with Dynamo’s youth setup, then with the German soccer federation as an assistant to Germany coach Berti Vogts. He left the Germany setup in 1996 to help save Werder Bremen from relegation. It was his only coaching job in the Bundesliga. Later he coached FSV Zwickau, Cairo-based club Al-Ahly, and VfB Leipzig.

Fans left flowers, lit candles and made tributes to Dörner at Dynamo’s Rudolf-Harbig-Stadion on Wednesday. The club said the impromptu memorial would remain for 10 days and it asked fans to adhere to hygiene measures to combat the risk of coronavirus infections.