Jonathan Kuminga has golden opportunity while Draymond Green is out 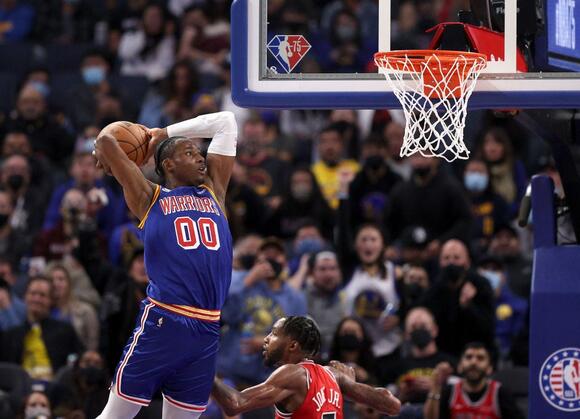 Draymond Green might not have been able to play Tuesday night against the Detroit Pistons but it was hard to ignore him at the end of the Warriors bench in his gray hoodie and gray pants. The veteran remained engaged throughout the game and was yelling at his teammates on the court, almost as a de facto extra assistant coach for Steve Kerr.

The venerated veteran is dealing with a calf injury that has been connected with a disc issue in his back and will be re-evaluated at the end of the month. Until then, expect to see a lot more Coach Draymond on the remaining six games of this lengthy homestand.

One of Draymond’s top projects could be aiding in the development of rookie forward Jonathan Kuminga. Following Golden State’s 102-86 win over the Pistons Tuesday, Kerr said that the plan is to start Kuminga in Green’s place for the foreseeable future.

“How many 19-year-olds can play above the rim like him? Go out there and get 12-and-10, a double-double in an NBA game?,” Thompson said. “I’m so excited for JK’s future. He has an incredibly high ceiling and one day down the line it’ll be his team. Or he’ll be a huge part of the team. I see him being one of the better players in the league one day.”

At this rate, Kuminga has the opportunity to become the biggest impact rookie of the Bob Myers era, since he took over as general manager in 2012.

Kuminga fought through early foul trouble Tuesday – he got whistled twice in the first 3:12 of the game – to still be productive against the lowly Pistons. Along the way, he guarded No. 1 overall pick and point guard Cade Cunningham, while also impressing Kerr with his power, rebounding and intensity.

“Over the course of the game he settled in after the foul trouble,” Kerr said. “JK’s coming along really well. He’s starting to understand the rhythm and patterns of an NBA game. He’s executing the plays that we draw up, he’s understanding the timing much better. Things were disjointed when he was out there early in the season, now things are much smoother and that’s a great sign.”

Green has been sidelined since Klay Day on Jan. 9. Kuminga, the No. 7 overall pick in last year’s draft has appeared in four Golden State games since, averaging 17.8 points, 6.8 rebounds and 1.5 3-pointers made per game while shooting 50 percent from the field and 37.5 percent from beyond the arc. That stretch has included the best game of his young career, a 26-point outburst against the Chicago Bulls last Friday.

Kuminga possesses unrivaled athleticism, can be a dogged defender, is showing promise with the 3-pointer, is probably the best rim attacker on the Warriors and he’s flashed a little post-up game, too.

All the tools are there for Kuminga to become a special player, it’s just a matter of the motor. Kerr and his staff chided Kuminga for his low-effort performance with the G League Santa Cruz Warriors on Jan. 11 and he’s been playing inspired since.

“Whenever I’m not running or I’m running, they’re going to come to me and tell me, ‘You’re doing great and you’re not doing great,’” Kuminga said.

Kuminga added that he was proud of the way he was able to play with foul trouble, as he picked up his fourth foul early in the third quarter. Since he’s a rookie, Kuminga knows he’ll get a quick whistle from the refs and be on a short leash from Kerr. But the intriguing wing player said he’s happy with his progress so far this season.

“I feel more comfortable,” Kuminga said. “I feel like I’m at the place where I want to be. Especially being a rookie on this team, I’m at a place where I don’t have to do too much. But I still contribute anytime they need me to do something.”

Once Green gets back, Kerr said there could be times when he and Green share the frontcourt together.

“At this point now for Jonathan, every night is a lesson,” Kerr said. “The more he’s aware of positional responsibilities, the more versatility he gives us. … He’s more likely to play with Draymond as a 5 in a switching lineup, where they’re playing the 4 and the 5 together and switching everything. There’s a lot of responsibility there. That’ll happen once Draymond gets back. We’ll get a look at that and see how he does.”

Until then, Kuminga has a golden opportunity to get starter’s minutes and grow his game against the game’s best. We might have seen the last of Kuminga in a G League uniform.

Ex-Warrior seems to regret leaving to sign with Lakers

One former Golden State Warriors player may be inquiring about the return policy on his free agent contract. Los Angeles Lakers swingman Kent Bazemore, who played for the Warriors last season, posted an interesting tweet Friday after Golden State clinched an NBA Finals berth the night before. “Congrats to my...
NBA・1 DAY AGO
95.7 The Game

The NBA has announced the schedule for the 2022 Finals. The Warriors await the winner of the Boston Celtics-Miami Heat Eastern Conference Finals.
SAN FRANCISCO, CA・2 DAYS AGO
95.7 The Game

The Warriors trio of Klay Thompson, Draymond Green and Steph Curry rank as the three winningest players in NBA playoff history as they make another Finals run.
SAN FRANCISCO, CA・1 DAY AGO
95.7 The Game

Andrew Wiggins 'deserves all the credit in the world,' says ESPN's Nick Friedell

ESPN’s Nick Friedell joined 95.7 The Game’s ‘The Morning Roast’ and said Andrew Wiggins “deserves all the credit in the world” for his career transformation with the Warriors.
SAN FRANCISCO, CA・1 DAY AGO

NBA analyst Brian Scalabrine joined 95.7 The Game’s “Steiny & Guru” Thursday to discuss the possibility of the Warriors playing the Celtics in the NBA Finals.
SAN FRANCISCO, CA・2 DAYS AGO
95.7 The Game

Ethan Sherwood Strauss: Draymond Green might be best defender ever

Ethan Sherwood Strauss joined 95.7 The Game’s “Damon & Ratto” Friday to discuss why he thinks Draymond Green might be best defender in NBA history.
NBA・1 DAY AGO
95.7 The Game

Mavericks superstar Luka Doncic complemented the Warriors and called them a “championship team” after Dallas lost to Golden State in the Western Conference Finals.
SAN FRANCISCO, CA・1 DAY AGO
95.7 The Game

Klay Thompson dropped 32 points and knocked down 8-of-16 3-pointers to lead the Warriors to a 120-110 over the Mavericks in Game 5 of the Western Conference Finals.
SAN FRANCISCO, CA・2 DAYS AGO

Ryen Russillo joined 95.7 The Game’s “Damon & Bruce” Friday and said the Warriors have the “best collective personality” of any team he’s ever watched.
SAN FRANCISCO, CA・1 DAY AGO
95.7 The Game

Warriors center Kevon Looney continues to produce in close out games this postseason, as he recorded a 10-point, 18-rebound double-double in Game 5 of the Western Conference Finals.
SAN FRANCISCO, CA・1 DAY AGO