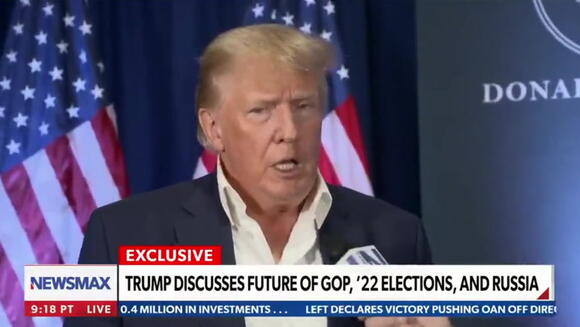 A Texas court ruling has prompted the state’s Republican attorney general to admit that the party is “done in Texas” electorally if anyone can now vote.

The comments come from Ken Paxton , who is currently embroiled in a number of controversies relating to his office's investigation into possible voter fraud.

Mr Paxton’s comments come after a Court of Appeals decision which will effectively strip him of the authority to prosecute “voter fraud”, with that now exclusively the job of local DAs.

Since there is no appeal process, all he can do now is ask for a rehearing. Speaking on Steve Bannon ’s War Room podcast , the AG confessed that the judicial decision could have a big impact on the outcome of Texan elections in years to come.

“We’re done in Texas if anybody can vote,” Mr Paxton bemoaned. “By this November, if we [the GOP} don't get this changed, I think it's very likely we could lose five members of the Texas Supreme Court, we could lose my position, we could lose Governor.”

Donald Trump’s former’s chief strategist then asked Mr Paxon how the ruling happened, to which he replied: “It came as a surprise to me, to my staff, we just thought this was a joke...and the timing is clearly planned.”

The Court of Appeals ruling is notable for the fact that it was made by an all-Republican court, which would seem to invalidate the 62-year-old’s inference that it was a politically motivated decision.

Mr Paxton’s unrelenting search for evidence of voter fraud is well documented. The Houston Chronicle claims that he has spent $2.2m since the 2020 Presidential election looking for evidence of foul play.

While no such evidence has been unearthed, accusations of wrong-doing on the part of Mr Paxton have surfaced. As MSNBC writes: “If there were a competition for the most scandal-plagued elected official in the United States, Texas Attorney General Ken Paxton would likely be leading the pack.”

Mr Paxton has been a vocal proponent of the widely debunked narrative that the 2020 election was stolen from Donald Trump. However, after uncovering very little in the way of voter fraud so far, the Houston native might finally be starting to feel power slipping away from his grasp.

So this White Republican admitted what we already knew, these voting laws are just racist White suppression to hold onto whatever power they got left.

I remember Trump telling his supporters that if they voted by mail-in ballots, they needed to vote in person too. This was to make sure their vote counted. Isn't that voter fraud on the part of Trump and his supporters if it was done?

Greene testified on Friday that she didn't recall whether she asked Trump to invoke military rule, despite telling Meadows to relay the idea to Trump.
ATLANTA, GA・26 DAYS AGO
Salon

Fox News host Lisa Kennedy said on Monday that U.S. lawmakers "should not have the government involved in education at all," suggesting that America should rid itself of the public school system entirely. Kennedy's remarks came during Monday's segment of "Outnumbered" in which Kennedy was facilitating a discussion around the...
CONGRESS & COURTS・25 DAYS AGO
Business Insider

An attorney for the campaign said they thought they were allowed to use the funds based on a "good faith" understanding of the "highly confusing" rules.
FLORIDA STATE・3 DAYS AGO

EXCLUSIVE: A group of Republican senators is introducing legislation to block the Biden administration from sending personnel and funding from the Department of Veterans Affairs (VA) to alleviate the crisis at the southern border. The senators are alarmed by the Biden administration's announced termination of Title 42 on May 23,...
CONGRESS & COURTS・25 DAYS AGO
Newsweek

The former president referenced scoring well on a cognitive test in 2018, which is designed to detect whether a person has early stages of dementia.
DELAWARE COUNTY, OH・27 DAYS AGO

Despite outcry from their elected officials in recent days, nearly half of Republican voters believe that the United States should provide baby formula to non-citizens at the country’s southern border. Republican lawmakers and right wing pundits have lashed out at President Joe Biden this week for continuing to provide formula to babies coming to the country with their families amid a nationwide shortage, with several conservative leaders referencing the alleged prioritization of “illegal babies” and “illegal mothers.” GOP voters, however, are not exactly rallying around the nativist attacks on migrant mothers and their babies. A new poll from YouGov conducted...
U.S. POLITICS・2 DAYS AGO
Salon

Rep. Marjorie Taylor Greene (R-GA) speaks to supporters of former U.S. President Donald Trump at the Banks County Dragway on March 26, 2022 in Commerce, Georgia. This event is a part of Trump's Save America Tour around the United States. (Megan Varner/Getty Images) On Monday, CNN's Andrew Kaczynski and Em...
COMMERCE, GA・25 DAYS AGO
The Independent

Florida Republicans have compared a protest against a newly drawn congressional map that dilutes Black voter strength in the state to the violent attempt to overturn the results of the 2020 presidential election on 6 January, 2021.On 21 April, a small group of mostly Black Democratic legislators staged a sit-in protest in the middle of the House floor, singing and praying and briefly delaying votes during a special legislation convened by Republican Governor Ron DeSantis, whose map eliminates two of the state’s four districts represented by Black Democrats and creates four more districts that lean Republican.State Rep Randy Fine...
PROTESTS・26 DAYS AGO
The Independent

Nancy Pelosi sharply rebuked her Republican rivals on Thursday at her weekly press conference and challenged Republicans to a national debate over the issue of providing funding to address a critical shortage of baby formula.Speaking to reporters, she questioned why Republicans opposed a funding bill passed by the House this week that would provide $28m to address the shortage and give the Food and Drug Administration (FDA) resources to try and prevent future issues in the market.“What's the objection? That we don't want to spend money on babies who are crying for food? Ok, let's have that debate,” she...
CONGRESS & COURTS・2 DAYS AGO

House Republican Leader Kevin McCarthy (R-CA) (Joe Raedle/Getty Images) There was a flurry of headlines last week when news broke that House Minority Leader Kevin McCarthy (R-CA) said out loud that he thought former President Donald Trump should resign in the wake of the deadly Jan. 6 insurrection. The focus was on the fact that McCarthy lied about ever expressing that thought - until, of course, he was confronted with the audio recording of him saying exactly that.
CONGRESS & COURTS・25 DAYS AGO
The Independent

On Tuesday evening I was asked, firmly but politely, by the Hendersonville police department to leave the premises of a small auto detailer and tire shop.But this was no ordinary auto detailer and tire shop: It was the home of the final (?) flameout of freshman Rep. Madison Cawthorn, who had just lost his primary in a stunning night, that didn’t even extend — as some analysts might have expected — to a June runoff election. Thanks to a resounding showing by Cawthorn’s main rival, state Sen. Chuck Edwards, it was all over for Cawthorn. It wasn’t explicitly mentioned, but...
HENDERSONVILLE, NC・6 HOURS AGO
Newsweek

Individual judges may not like the policy choices of the Biden administration, but it is not their job to weigh in on that policy debate.
TEXAS STATE・26 DAYS AGO
The Independent

American Conservative Union chairman Matt Schlapp on Thursday told a gathering of right-wing activists that banning abortion and forcing women to carry unwanted pregnancies to term would be a good way to boost birth rates of “our own people” and stave off the “great replacement” many Republicans and white supremacists fear will result from increased levels of immigration to the United States.The former George W Bush aide was speaking in Budapest, where the ACU is holding an edition of its Conservative Political Action Conference in hopes of promoting greater ties between the Republican Party and Hungarian authoritarian leader Viktor Orban’s...
IMMIGRATION・1 DAY AGO

Thomas Webster’s trial kicked off with dueling videos from the Capitol and competing theories of what they showed.
LAW ENFORCEMENT・25 DAYS AGO