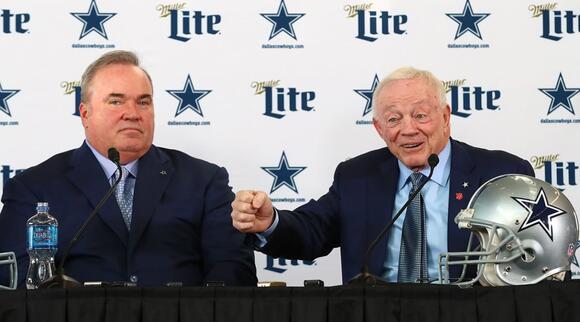 ESPN's analyst ran down a long list of miscues from the Cowboys in 2021.

There's been widespread discussion about Mike McCarthy‘s future with the Cowboys following Dallas‘s loss to the 49e rs on wild-card weekend.

ESPN analyst Dan Orlovsky appeared on The Rich Eisen Show this week, and he laid out a pretty compelling case against McCarthy. Orlovsky laid out numerous examples of major game and clock management miscues by McCarthy and the Cowboys this year, adding the collection of errors should likely lead to the coach’s dismissal.

“Week 15 he throws the ball to Dalton Schultz and they don't take a shot at the end zone because he says that they're ‘in the o-zone.’ Week 17, two weeks ago against the Cardinals, he calls timeout, he can't challenge the fumble .

Orlovsky is far from alone in his criticism of McCarthy, but those with the authority to make a change in Dallas don't appear interested in a shakeup ahead of the 2022 season.

Owner and general manager Jerry Jones declined to speak about McCarthy's job status after the loss to San Francisco. His son, team executive vice president Stephen Jones, said that he is “very confident” that McCarthy will be back during a radio interview Monday .

“I don't have any concerns,” McCarthy said after the game Sunday when asked about his job status. “I'm proud to be standing here today. I'm proud of this football team.”

For more Dallas Cowboys coverage, head over to Cowboy Maven .

John Ruiz believes the Alabama coach was way off base with his comments.
MIAMI, FL・2 DAYS AGO
Sports Illustrated

The wide receiver said that he had to put himself and his family first while deciding to move on from Tennessee.
PHILADELPHIA, PA・2 DAYS AGO
Sports Illustrated

Two former head coaches and a high-level assistant are up for the position.
LOS ANGELES, CA・2 DAYS AGO

But how will change at QB affect Pittsburgh’s pass catchers?
PITTSBURGH, PA・4 HOURS AGO
Sports Illustrated

The former teammate of James addressed the rumors about the superstar’s impact in roster building.
CLEVELAND, OH・2 DAYS AGO
Sports Illustrated

The Alabama fan couldn’t help himself and took a jab at the Texas A&M coach after winning the PGA Championship.
COLLEGE STATION, TX・1 HOUR AGO

The five teams with the hardest schedules in the 2022 season are from the same two divisions.
KANSAS CITY, MO・2 HOURS AGO
Sports Illustrated

Beware these 10 players, whose might be overvalued for various reasons.
NFL・1 HOUR AGO
Sports Illustrated

The second-year head coach has liked what he’s seen (and heard) from his team this offseason. Plus, how the Bills have been there for their community and more.
NFL・6 HOURS AGO

Fisher Says He Hasn’t Spoken to Saban Since NIL Comments

Both made epic entrances to their latest pregame shows.
NBA・4 HOURS AGO
Sports Illustrated

The Giants wideout is reportedly expected to be ready for training camp in July.
EAST RUTHERFORD, NJ・2 DAYS AGO
Sports Illustrated

The 41-year-old has ultimately decided to stay on the sidelines.
NFL・22 HOURS AGO
Sports Illustrated

The NBA legend made sure to crack a couple jokes at the expense of the Warriors forward as he prepared for Game 2 against the Mavericks.
NBA・2 DAYS AGO
Sports Illustrated

He had nine sacks in Cleveland last season.
CLEVELAND, OH・1 DAY AGO