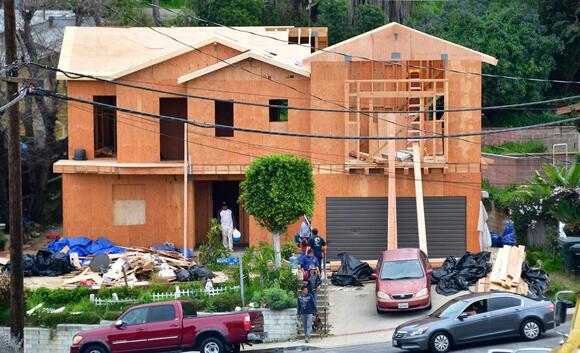 Earlier Wednesday, data from the U.S. Census Bureau showed that U.S. home builders started construction of new homes at a seasonally adjusted annual rate of 1.7 million in December, up 1% from the previous month, compared with expectations for a decline to 1.65 million. And permits for new-home construction rose 9% from November to a seasonally adjusted rate of 1.87 million, well above expectations of 1.71 million.

Zener explains that since 1969, there have been 19 interest-rate tightening cycles, and home builder stocks have declined 89% of the time, with an average aggregate drop of 32% from peak to trough. The sector declined 12% the first three months after the first rate hike, and fell 21% from the first hike to the last.

And with current inflation running at the fastest clip in nearly four decades , the Fed is widely expected to start raising interest rates in March .

Basically, rising rates not only makes buying a house more expensive, they can also reduce liquidity in the financial system, making less money available for mortgages.

The overall impact of rate-hike cycles has been an average 8% drop in the home-buying affordability index, Zener said.

Zener’s downgrades come before the first rate hike, because he argues that home builders are “early cycle,” which suggests they peak before the start and bottom before the end of the cycle. And to Zener, “early means not waiting to find out if fundamental considerations are valid in the future.”

Zener said rate-hike cycles have lasted 10 months on average, and his analysis shows that “buying the builders ~75% through the tightening
cycle is best.”

If the Fed does start raising rates at the March 15-March 16 policy setting meeting , that would imply sometime in late-October or early-November would be the “best” time for builder stocks.

Despite the extensive losses seen for stock markets so far this year, it’s not over until it’s over — and investors should keep selling into any big rebounds higher. That’s the advice from a team of strategists at Bank of America, led by Michael Hartnett, in their Friday “Flow Show” note. In focus for the bank is increasing debate about whether the market has capitulated, which refers to investors basically giving up on trying to recapture lost gains.
STOCKS・1 DAY AGO
MarketWatch

Shares of Deere & Co. DE, -14.07% fell 1.8% toward a three-month low in premarket trading Friday, even after the agriculture, construction and forestry equipment maker reported fiscal second-quarter profit and revenue that rose above expectations, as "strong demand" helped offset supply-chain pressures. Net income increased to $2.10 billion, or $6.81 a share, from $1.79 billion, or $5.68 a share, in the year-ago period. The FactSet consensus for earnings per share was $6.69. Sales grew 10.9% to $13.37 billion, above the FactSet consensus of $13.23 billion. Cost of sales rose 12.5% to $8.92 billion, as gross margin contracted to 33.3% from 34.3%. Production & Precision Agriculture sales rose 13% to $5.1 billion, Small Agriculture & Turf sales increased 5% to $3.6 billion and Construction & Forestry sales rose 9% to $3.45 billion. The company affirmed the sales growth outlook for fiscal 2022. Deere's stock has gained 6.3% year to date through Thursday while the S&P 500.
STOCKS・1 DAY AGO
The US Sun

MILLIONS of Americans are set to receive Social Security checks worth up to $1,657 tomorrow. The cash boost will come just 48 hours before Supplemental Security Income payments, worth up to $841, are set to land in around eight million bank accounts on April 29. Seniors with birthdays on the...
BUSINESS・25 DAYS AGO

Sprouts Farmers Market, a popular regional grocery store chain in California, is closing two of its locations on June 3, 2022. Read on to find out which store locations will be affected by the closures.
CALIFORNIA STATE・2 DAYS AGO
Fortune

Sign up for the Fortune Features email list so you don’t miss our biggest features, exclusive interviews, and investigations. U.S. tariffs on Chinese imports survived a change in administration, but the trade-war-era levies may not survive record inflation. “We’re certainly looking at where we see costs being raised and,...
PRESIDENTIAL ELECTION・25 DAYS AGO
Business Insider

A member of a superyacht crew also told The Times of London that one owner had his bar stools made from whale foreskin.
BOATS & WATERCRAFTS・27 DAYS AGO
MarketWatch

COLOMBO, Sri Lanka (AP) — Sri Lankan authorities on Friday closed schools and asked public officials not to come to work in a desperate move to prepare for an acute fuel shortage that is expected to last days amid the nation’s worst economic crisis in decades. The Public...
ASIA・2 DAYS AGO

TerraUSD USTUSD, -22.76% and LUNA LUNA, -4.26% are being falsely accused for what’s come to be known as the “crypto crash.” A good counterargument can be made that the real culprit is bitcoin’s. BTCUSD,. +0.91%. overvaluation. The notion that bitcoin’s fair value can even be calculated...
MARKETS・19 HOURS AGO
MarketWatch

Russia halted gas exports to neighboring Finland on Saturday, a highly symbolic move that came just days after the Nordic country announced it wanted to join NATO and marked a likely end to Finland’s nearly 50 years of importing natural gas from Russia. The measure taken by the Russian...
ENERGY INDUSTRY・14 HOURS AGO
MarketWatch

Beyond helping clients manage their finances, some financial advisers aim higher. They educate consumers — people they will never meet — about personal finance. These advisers have created free resources that empower individual investors to make wise financial decisions. Such resources also can enhance advisers’ marketing and brand identity — enabling them to reach a far wider audience than their client base. Some of these online tools have legions of fans.
PERSONAL FINANCE・19 HOURS AGO

President Biden on Saturday signed legislation to support Ukraine with an additional $40 billion in U.S. assistance as the Russian invasion approaches its fourth month. The legislation, which was passed by Congress with bipartisan support, deepens the U.S. commitment to Ukraine at a time of uncertainty about the war’s future. Ukraine has successfully defended Kyiv, and Russia has refocused its offensive on the country’s east, but American officials warn of the potential for a prolonged conflict.
FOREIGN POLICY・18 HOURS AGO
MarketWatch

It’s an image of a man in thoughtful repose, looking down at the camera as he stands in front of a brick wall. In short, a selfie that seems designed not to call too much attention to itself. And yet, it’s the picture that some say may have played...
MINNEAPOLIS, MN・19 HOURS AGO