Earnhardt Jr. matches his father as NASCAR Hall of Famer 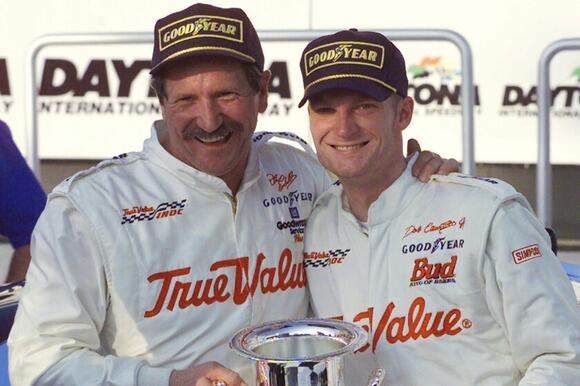 Dale Earnhardt Jr. recognized early he would never be a seven-time NASCAR champion like his dad.

It was unrealistic to believe he would match the late Dale Earnhardt on the track. The Intimidator was tough as nails, didn't tolerate any nonsense and built a winning resume that made him a first ballot Hall of Famer in NASCAR's 2010 inaugural class.

But what he did do was build a career as NASCAR's top ambassador, finding a crossover audience that stretches far beyond his father's reach.

“Once I realized that I wasn't going to match dad's statistics on paper ... to me, my dad was this really important part of the puzzle, and he was important because of his success but also because of the reaction to whatever he did," Earnhardt told The Associated Press this week. “I thought, ‘Wow, that is an asset, that's what being an asset to the sport is and this guy is valuable.' I wanted to have that same value.”

Earnhardt will join his father in the NASCAR Hall of Fame on Friday night when he is inducted alongside Red Farmer and Mike Stefanik . The hall welcomed five members each of its first 11 years, then tweaked the rules to cut the inductees down to three for the 2021 class.

Earnhardt is the headliner of this first three-member class, whose induction was postponed a full year by the pandemic. He is being celebrated for his performance accomplishments — 26 career Cup Series victories that include a pair of Daytona 500 wins, and two championships in NASCAR's second-tier series — but also for the enormous role he's taken on since his father was killed 21 years ago on the final lap of the Daytona 500.

Earnhardt was a rising star at the start of his second Cup season when his father died. His dad had built a powerhouse race team at Dale Earnhardt Inc. and persuaded Budweiser to sponsor his kid; the brewer went all-in on introducing Junior to a mainstream audience.

The elder Earnhardt was a superstar, but his fan base was filled with the blue-collar folks who drove Chevrolets and wore Wranglers, just like their favorite driver.

Earnhardt Jr. was profiled in Rolling Stone magazine and showed off the nightclub in his home on MTV’s “Cribs.” His crossover appeal landed him appearances in various music videos for artists ranging from Trace Adkins to Nickelback to Jay-Z.

A lot of it seemed silly to his old man, but when Earnhardt was killed his legacy immediately fell to a 25-year-old adjusting to his insane popularity. He admittedly suffers from severe anxiety, but Earnhardt navigated the heightened spotlight with brutal honesty and raw emotion.

The third-generation racer became a 15-time winner of NASCAR's fan-voted most popular driver award, and over the last two decades has built an empire centered around the sport his family holds in such high regard. Earnhardt has a successful media company and both his television special series “Lost Speedways” and “The Dale Jr. Download” podcast are fan favorites.

He teamed with his sister, Kelley, to grow their JR Motorsports race team into one of the best in the Xfinity Series, and as a lead analyst for NBC Sports he plays a huge role in how the sport is delivered to its audience.

The late Earnhardt never got to see what his children accomplished, creating a nagging void his son says he can't shake.

“I think he would be surprised," Earnhardt told AP. He said his dad didn't believe his children would be successful race car drivers so his two Busch Series titles caught him off guard.

“I think he certainly would be happy and proud, but also typical Dad going, ‘Well, if you try a little harder here,’ or ‘If you had done a little different there’ and ‘Maybe you should prioritize this,’” Earnhardt said. “That's exactly what I would expect from him and I would welcome that type of criticism today."

Earnhardt left DEI six years after his father's death due to a difficult relationship with the elder Earnhardt's widow; the race team no longer exists. His free agency courting was among the most frenzied in NASCAR history and Earnhardt moved to powerhouse Hendrick Motorsports in 2008.

He believes his father would think he fell short of his on-track potential. He agrees.

“Once I got to Hendrick and really realized what being a driver is about, and really understood what kind of commitment it takes, I look back on the Bud years and go, 'Wow, I really could have done so much more with that because I had some really awesome race cars and we had a hell of a team," Earnhardt said.

“There's some regrets and mistakes and things that I wish I would have done differently. Dad would have pointed those out for sure.”

Earnhardt reluctantly embraces his off-track success, which includes a near-daily influence on NASCAR. He tested the new Cup car last week at Daytona International Speedway so he can accurately discuss it for an audience, and he lobbied the Hall of Fame to allow Stefanik's widow to give a speech at Friday night's ceremony.

He has always followed the belief that he can convert NASCAR's toughest critic. And in his father's absence, he's spent the last 20 years holding NASCAR's vice chairman Mike Helton in the highest regard, confident that if his father's close friend respects him, then he was doing things right.

And yet Earnhardt deflected what his father might think, crediting instead his sister, co-owner of JR Motorsports.

“I think that he would be so proud of Kelley and who she has become, the amount of respect, her stature, I think that would matter a lot to him,” Earnhardt said. "He would credit her and tell me that's she a lot of the reason why we've accomplished everything we have. And he would be right. But, you know, he wouldn't tell her. He'd tell me about Kelley, and he'd talk to Kelley about me.

“I would do anything to hear what he thinks about all the things we've done and everything we've been involved in. I would just do anything to really, really truly know what his words would be. I think about it all the time.”

The Orlando Magic won the NBA draft lottery and landed the No. 1 overall pick for the first time since they got Dwight Howard nearly two decades ago
ORLANDO, FL・1 DAY AGO
San Diego Union-Tribune