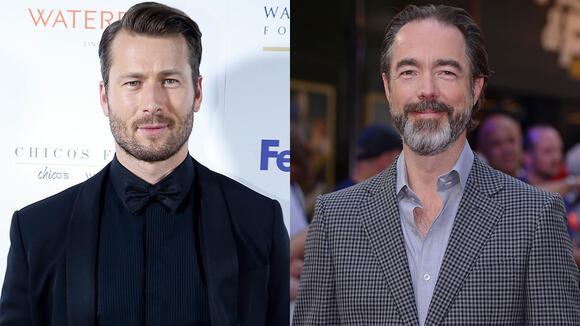 Actor Glen Powell has teamed up with Fast & Furious writer-producer Chris Morgan for Deputy X , a sci-fi action-thriller set up at Universal Pictures.

Powell will star and helped come up with the idea and concept for the project, which is intended to be a high-concept franchise starter for the actor.

Morgan, who has a long-standing relationship with the studio thanks to his work as writer and producer on seven of its Fast movies, will produce along with Ainsley Davies, the head of development at his Chris Morgan Productions.

Jack Paglen, whose previous credits include Transcendence starring Johnny Depp and Alien: Covenant , will write the script. Details for X are being kept secret, but it has been described as being tonally in the vein of such films as Arnold Schwarzenegger flick The Running Man and 1970s cult classic Logan’s Run .

Known for his roles in romantic comedy Set It Up and drama Hidden Figures , Powell will next be seen in Paramount’s highly anticipated Top Gun: Maverick and Sony’s Korean War epic Devotion .

Morgan’s producing credits include Fast and Furious Presents: Hobbs and Shaw, The Fate of the Furious, Furious 7, Fast & Furious 6 and Fast Five . In all, Morgan has authored seven installments in Universal’s multibillion-dollar Fast franchise, his association beginning with the third film, Tokyo Drift . Morgan also produced the hit thriller Bird Box for Netflix and is currently producing a Spanish-language spinoff set in Barcelona.

Powell is repped by CAA, The Initiative Group and Johnson Shapiro. Paglen is repped by ICM Partners and Lichter Grossman.

Tom Cruise still goes to the movies — “I put my cap on,” he said — and he wants audiences to keep going, too. Prior to Top Gun: Maverick making its Palais debut at the Cannes Film Festival,  Cruise sat down for what was billed as a “MasterClass Conversation” with French journalist Didier Allouch in the festival’s 1,000-seat Debussy Theatre, which was packed with apparent Cruise aficionados.More from The Hollywood ReporterTom Cruise and 'Top Gun: Maverick' Touch Down in Cannes With Fighter Jets, Surprise Palme d'OrHow Kinostar Has Been Turning Niche Audiences Into Big Business for 25 YearsCrypto Craze Hits Cannes...
MOVIES・1 DAY AGO
The Hollywood Reporter

The Cannes Film Festival literally kicked into overdrive (overflight?) on Wednesday as Tom Cruise and his Top Gun: Maverick team touched down on the Palais for a high-octane premiere that included eight fighter jets zooming above the event, expelling smoke in red and blue to match the colors of the French flag. The actor was already destined to be the biggest draw of Cannes 2022 long before he hit the Croisette, where Top Gun: Maverick is getting splashy promotion by Paramount ahead of its global rollout on May 25. But even by the festival’s own standards, Cruise received the sort of rapturous...
MOVIES・1 DAY AGO
The Hollywood Reporter

Maya Hawke is set to appear onscreen alongside her mother, Uma Thurman, for the very first time, The Hollywood Reporter can reveal. Hawke has been cast in Yale Entertainment’s dark comedic thriller The Kill Room, also starring Samuel L. Jackson and Joe Manganiello. The Stranger Things and Once Upon a Time in Hollywood star has been added to the cast alongside other newly unveiled names, including Debi Mazar (Goodfellas, Little Man Tate, Entourage) and Larry Pine (Succession, The Royal Tenenbaums, Moonrise Kingdom).More from The Hollywood ReporterTom Cruise and 'Top Gun: Maverick' Touch Down in Cannes With Fighter Jets, Surprise Palme d'OrHow...
LOS ANGELES, CA・1 DAY AGO

Universal is taking a triple shot of Jason Momoa. The studio has picked up Shots! Shots! Shots!, an action-comedy from scribes Matt Mider and Kevin Burrows that has Momoa attached to star.More from The Hollywood ReporterJason Momoa Apologizes After Posting Photos at Sistine Chapel During Break From 'Fast X' ShootJason Momoa to Star in 'Minecraft' Movie for Warner Bros.Oscars: Jason Momoa, Serena and Venus Williams Added to Presenter Lineup Momoa will also produce the feature project with partner Jeff Fierson along with Dan Lin and Jonathan Eirich of Rideback, the banner behind the billion-dollar-grossing live-action Aladdin and Oscar-nominated drama The Two Popes. The story...
MOVIES・18 HOURS AGO
Hello Magazine

Click here to read the full article. It seems like everyone was rooting for Renée Zellweger and Ant Anstead to get together, including an unexpected duo: the Property Brothers. Drew and Jonathan Scott recently revealed that they were the ones that ended up getting Zellweger and Anstead to meet, and subsequently fall in love. And their hard work ended up paying off! Back on April 14, 2022, the Scott brothers sat down with ExtraTV to talk about everything from Drew’s upcoming fatherhood to Jonathan loving GF Zooey Deschanel’s Vanity Fair gown. While we loved the entire interview, we’re losing it over...
CELEBRITIES・25 DAYS AGO
The US Sun

GENERAL Hospital revealed a major character change is coming to the show this week as one of its stars battles health issues. There are often comings and goings happenings on soaps, and the latest cast switch-up involves longtime cast member Nancy Lee Grahn. Nancy, who turns 66 on Thursday, has...
CELEBRITIES・24 DAYS AGO

After weeks of silence, Chris Rock has finally addressed his now-infamous incident with Will Smith at March's 94th Annual Academy Awards. During another sold-out show at Baltimore's Lyric Performing Arts Center on Friday, Rock directly referenced the slap, but only spent a second on it before moving on with his set.
BALTIMORE, MD・25 DAYS AGO
Us Weekly

The show — and the vacation — must go on. Jada Pinkett Smith determined that the family trip to India wasn't going to be canceled due to Will Smith's Oscars slap. "Will and Jada have taken the family on [a] vacation that was already planned," a source exclusively tells Us Weekly. The Concussion star, 53, […]
CELEBRITIES・25 DAYS AGO
The Hollywood Reporter

Once again, Disney (DIS) - Get Walt Disney Company Report is finding itself embroiled in a political quagmire owing to its support of the LGBTQ community, after Florida Gov. Ron DeSantis punished Disney for denouncing his “Don’t Say Gay Bill,” by seeking to revoke Disney World’s designation as a special tax district (which as we pointed out, is ultimately a meaningless gesture).
FLORIDA STATE・23 DAYS AGO

Too $hort has worked with a score of legendary producers throughout his almost 40-year career, from Jermaine Dupri and Lil Jon to Daz Dillinger and DJ Pooh. But one big-name beatsmith he passed up the opportunity to work with was Kanye West. During a recent interview with VladTV, the Bay...
CELEBRITIES・24 DAYS AGO
PopCrush

Spring is always a big time for engagements and weddings, and two beloved internet personalities are the latest to update their relationship status. On April 18, Rachel "Seltzer" Quirico revealed she and longtime boyfriend Trevor "TorcH" Housten were tying the knot after 17 years together. Both of them are beloved figures in the esports world, with Seltzer notably starring in the Syfy reality show WCG Ultimate Gamer. She's also hosted numerous esports tournaments and events for TV/streaming outlets; she also made a recent appearance on G4 TV's Boosted.
RELATIONSHIP ADVICE・24 DAYS AGO
Outsider.com

She’s definitely embracing the Hawaii lifestyle, and now “NCIS: Hawai’i” star Vanessa Lachey is showing off her everyday surrounding to her Instagram followers. “Hawai’i = Home,” Vanessa Lachey declares in her latest social media post. The “NCIS: Hawai’i” star also shares a snapshot of her sitting in a breathtaking area in Hawaii.
HAWAII STATE・23 DAYS AGO
The Hollywood Reporter

June Preston, the popular child actress of the 1930s and ’40s who appeared in films directed by Frank Capra, Preston Sturges, Ernst Lubitsch and Raoul Walsh before becoming a world-renowned opera singer, has died. She was 93. Preston died Wednesday at a nursing home in Montclair, New Jersey, after a battle with dementia, her daughter, Sabrina Pires, told The Hollywood Reporter.More from The Hollywood ReporterMaggie Peterson, Actress on 'The Andy Griffith Show,' Dies at 81Fred Ward, Actor in 'Remo Williams,' 'Henry & June' and 'Tremors,' Dies at 79Bruce MacVittie, 'American Buffalo,' 'Law and Order' Actor, Dies at 65 Born in Glendale on...
MONTCLAIR, NJ・2 DAYS AGO
The Hollywood Reporter

Country stars Faith Hill, Trisha Yearwood, Brandi Carlile, Little Big Town, Martina McBride and Ashley McBryde will join Wynonna Judd on tour this fall after the sudden death of her mother and musical partner, Naomi Judd. The mother-daughter duo’s final tour together was scheduled to start in September. But Judd died April 30 at age 76, one day before they were inducted into the Country Music Hall of Fame. Wynonna Judd announced at a public memorial that she wanted to continue with the tour.More from The Hollywood ReporterNaomi Judd Celebrated as "Legend Who Left Country Music Better Than She Found It"...
CELEBRITIES・19 HOURS AGO
The Hollywood Reporter

The Wonder Twins have been deactivated. The DC-based feature project, which was to have begun production in early July, has been shelved, according to multiple sources.More from The Hollywood ReporterFrank Grillo Horror-Thriller 'Merciless' Among New Additions to Sentient's Cannes SlateChina Eyes "Restart" of International Cooperation Post-PandemicBuenos Aires Launches International Film Production Rebate The project was being developed as a feature for HBO Max and had Riverdale star KJ Apa and 1883 actress Isabel May on board to star. Adam Sztykiel, who worked on the script for Dwayne Johnson’s upcoming Black Adam, wrote the Wonder Twins script and was due to direct. Sources say...
MOVIES・1 DAY AGO
The Hollywood Reporter

Call it Stan Lee: Homecoming. In a unique deal, Stan Lee, the beloved co-creator of Spider-Man, Avengers and Hulk who died in 2018, is returning to Marvel Studios.More from The Hollywood Reporter'Spider-Man' Director Jon Watts to Helm Coming-of-Age 'Star Wars' Disney+ SeriesAbandoned 'Fantastic Four' Film Star Alex Hyde-White Talks Cherished Legacy and New "Force to Be Reckoned With" Reed Richards ActorFantastic Four: A Complicated Cinematic Flashback -- And Why Fans Are Elated for Group's Future Following 'Doctor Strange 2' Marvel has signed a 20-year deal with Stan Lee Universe, a venture between Genius Brands International and POW! Entertainment, to license the name...
ECONOMY・2 DAYS AGO