#Nba Tv#Planet#Audible#Celebrity#The Celebrity Board Of 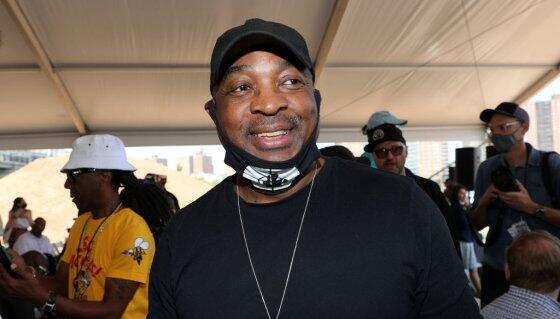 As the frontman and cofounder of legendary Hip-Hop group Public Enemy , Chuck D has made music that changed the culture of the globe. And now, he’ll guide listeners as host of a new audiobook series chronicling music that has had the same impact.

Audible , the Amazon platform dedicated to audiobooks, has announced that they are producing a new series under their Words + Music format entitled Songs That Shook the Planet . The series, which is crafted to showcase songs that have had significant influence politically and socially, will have Chuck D as the host.

Songs That Shook the Planet will feature tunes from a variety of notable artists including Marvin Gaye, Billie Holiday, and Stevie Wonder, among others. Remaining true to the Words + Music format, this new series also allows listeners to gain better insight into the catalog of songs featured from these artists that bridge the gaps between genres and the decades, connected by the emotional and social weight that they carry.

For Chuck D, the series also allows him to share his own experiences about each of the songs as he first heard them growing up, in some cases with his mother’s record player being the gateway. In each episode, he expresses how each featured song helped to mold his own personal viewpoints when it came to activism and being someone who has dedicated his life and career to obtaining true change for the people. The Public Enemy lyricist has become a go-to figure as a political activist and artist, with roles as Chairman of the Celebrity Board of the Universal Hip-Hop Museum being constructed in the Bronx and as a highly-sought-after lecturer and author who has lent his distinctive voice to projects such as the Dr. J documentary for NBA TV.

Songs That Shook The Planet will make its debut on Audible on February 3.

In an exclusive trailer for the "Origins of Hip-Hop" documentary series premiering on A&E next week, the former First Lady of Ruff Ryders talked about how her first encounter with the label was a battle between her and DMX himself.
ENTERTAINMENT・1 DAY AGO
The US Sun

RAY Liotta, the brilliant actor who made his name in Martin Scorsese's crime classic Goodfellas, has passed away. The star died in his sleep in the Dominican Republic, where he was filming Dangerous Waters, according to Deadline. There were no signs of foul play or anything suspicious about the death,...
CELEBRITIES・1 DAY AGO
HipHopWired

Fat Joe is now a much wiser Fat Joe. The Don has admitted he was wrong by beefing with Jay-Z and the Roc-A-Fella Records crew. As per Hype Beast you can always count on the South Bronx native for a great interview. In his latest Q&A he sat down with Math Hoffa and crew on the My […]
CELEBRITIES・1 DAY AGO

This Saturday, May 21, The Notorious B.I.G would’ve turned 50-years-old and to commemorate what would’ve been Biggie hitting the half-century mark, the MTA will be releasing some limited-edition MetroCards honoring the OG King of New York. According to the Gothamist, MetroCards baring the face of the Hip-Hop icon will be available this weekend but unfortunately […] The post Notorious B.I.G. MetroCards From MTA On Biggie’s Birthday appeared first on The Latest Hip-Hop News, Music and Media | Hip-Hop Wired.
NEW YORK CITY, NY・8 DAYS AGO
HipHopWired

The Notorious B.I.G.'s ability to craft hits along with hard bars displayed the scope of his ability. The post The Notorious B.I.G. Will Receive Empire State Honor For 50th Birthday appeared first on The Latest Hip-Hop News, Music and Media | Hip-Hop Wired.
NEW YORK CITY, NY・9 DAYS AGO
HipHopWired

However, it looks like the beef between the past collaborators escalated after Gibbs was allegedly beaten by goons affiliated with Benny The Butcher. The post Freddie Gibbs Allegedly Catches B$F Taper & The Fade In Buffalo From Benny The Butcher’s Goons? appeared first on The Latest Hip-Hop News, Music and Media | Hip-Hop Wired.
BUFFALO, NY・10 DAYS AGO
HipHopWired

One of New York City’s greatest talents has received a special distinction. Remy Ma has been honored with a street in her name. As per Vibe Magazine the “All The Way Up” rapper is now officially in the Big Apple history books. Earlier this week a ceremony was held to unveil the newest addition to the […] The post Big Bronx Energy: Remy Ma Honored With Street In Her Name [Video] appeared first on The Latest Hip-Hop News, Music and Media | Hip-Hop Wired.
BRONX, NY・9 DAYS AGO

#Nba Tv#Planet#Audible#Celebrity#The Celebrity Board Of
HipHopWired

For a while now Swizz Beatz has been keeping himself busy setting up Verzuz battles for the culture (dropped the ball on that last one though), so if any artist is lucky enough to get some music from the Hip-Hop legend you know he gonna deliver. Blessing $kinny with some new work, Swizz Beatz and […] The post $kinny, Swizz Beatz & French Montana “Salam,” Beanie Man “Blessings Pon Blessings” & More | Daily Visuals 5.17.22 appeared first on The Latest Hip-Hop News, Music and Media | Hip-Hop Wired.
MUSIC・10 DAYS AGO
HipHopWired

Rihanna and A$AP Rocky are now the proud parents of a baby boy. Reportedly, the Bajan singer gave birth to the couple’s first child last week. Apparently, this is old news for some since TMZ reports that the bundle of joy actually arrived on May 13. If we’re keeping it a bean, speculation began spreading […] The post Rihanna & A$AP Rocky Welcome Baby Boy appeared first on The Latest Hip-Hop News, Music and Media | Hip-Hop Wired.
MUSIC・8 DAYS AGO
HipHopWired

The enigmatic, extended and elusive path toward the release of Kanye West’s 11th album, DONDA 2, continues. The announcement of a new soundtrack tied to the documentary on late rapper XXXTentacion includes a song that features Kanye West and is scheduled to be on the “proper” release of the aforementioned, mythical album.   YE & […]
CELEBRITIES・4 DAYS AGO
HipHopWired

Doja Cat Drops Out Of The Weeknd’s Summer Tour, Slated To Have Surgery

The "Say So" singer shared that she'll drop out The Weeknd's summer tour in order to recover from tonsil surgery.
MUSIC・6 DAYS AGO

Flava, You ARE The Father: Flava Flav Finds Out He Has A 3-Year-Old Toddler

In today’s episode of Flava Of Love Child, Hip-Hop icon Flava Flav has been informed, at 63-years-old, that he is the father of an eighth child. According to TMZ, a paternity test has proven the Public Enemy hype man and Hip Hop producer has a 3-year-old son named Jordan, whose mother is Flav’s former […]
RELATIONSHIPS・5 DAYS AGO
HipHopWired

Cardi B Shares How To Change Diapers With Long Nails, Even Non-Parents Are Intrigued

Cardi B continues to hold the culture in the palm of her hands. Kash Doll was curious to know how she changes diapers with her signature nails and she was happy to oblige. As per Buzz Feed the South Bronx bombshell is the talk of Twitter once again. Earlier this week her peer Kash Doll asked […]
CELEBRITIES・8 DAYS AGO
HipHopWired

6 Things We Learned From A$AP Rocky On ‘Drink Champs’

A$AP’s been one of New York’s most prominent artists for a while now but lately he’s been making more noise for being Rihanna’s baby daddy (don’t hate) and with that came all kinds of rumors and slander that one would expect from the hatin’ ass internets. Recently the A$AP Mob representative swung by Nore’s Drink […] The post 6 Things We Learned From A$AP Rocky On ‘Drink Champs’ appeared first on The Latest Hip-Hop News, Music and Media | Hip-Hop Wired.
MUSIC・8 DAYS AGO
HipHopWired

Harlow caused a stir after recently discovering that the R&B singer is the sister of Ray J, sparking a mild back and forth.
CELEBRITIES・7 DAYS AGO
HipHopWired

Just days after rumors that the Migos were breaking up shook the Hip-Hop world, Quavo and Takeoff debut their “Unc and Phew” personas by dropping their first Offset-less visual in “Hotel Lobby.” Using a Fear and Loathing In Las Vegas theme for their new video, Quavo and Takeoff hit the desert in search of drug […]
CELEBRITIES・7 DAYS AGO
HipHopWired

It’s been a hot minute since we’ve seen Wyclef, Lauryn Hill or Pras Jean do his music thing and while we’re disappointed that the highly-anticipated Fugees reunion tour has been postponed, Wyclef is keeping the Fu’s legacy going until the reunion finally happens (if ever). Linking up with Jessie Woo and Eddy Francois for the […] The post Wyclef Jean ft. Jessie Woo & Eddy Francois “VOYE DLO,” Post Malone ft. Roddy Ricch “Copped Up” & More | Daily Visuals 5.18.22 appeared first on The Latest Hip-Hop News, Music and Media | Hip-Hop Wired.
MUSIC・8 DAYS AGO
HipHopWired

We feel like many women would love it if they could keep Idris Elba in a bottle all to themselves but imagine the man was able to grant you three wishes as well. Women would go crazy. That seems to be the premise for George Miller’s latest film, Three Thousand Years Of Longing starring Tilda […]
MOVIES・4 DAYS AGO
HipHopWired