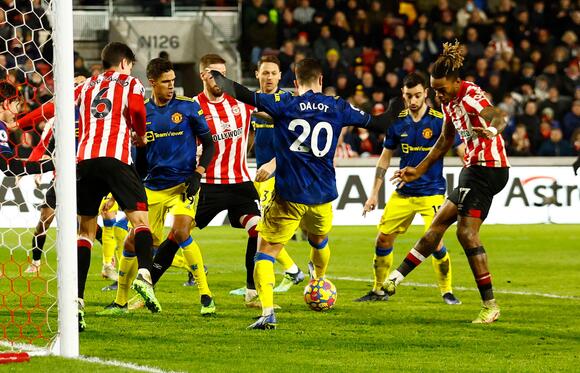 Was this the attitude Cristiano Ronaldo demanded? Whatever about refusing to accept criticism, Manchester United ’s new generation refused to accept anything other than victory. It was certainly the response, and the result, Ralf Rangnick and his team needed. On a night when they were often second best to Brentford, and mere days after Ronaldo gave such a pointed interview about the attitude of younger players, three of the club’s youth graduates scored to secure a crucial 3-1 win in the race for fourth. The table looks that bit better for United. The mood is that bit improved.

That’s the spirit of youth, that feels all the more special when another new academy player scores. The 19-year-old Anthony Elanga was no mere detail in adding to United’s long list of historic teenage goalscorers, though. He offered the most important moment of the game at Brentford Community Stadium, brilliantly improvising on a hopeful cross to give United a lead they scarcely deserved.

Neither he or the team looked back. They were instead racing away, especially for the two moments that clinched it. Mason Greenwood slid in the second on the break before substitute Marcus Rashford thrashed in to score his first goal since October. The angry nature of the finish made it seem like Rashford was proving a point.

Follow all the live reaction after Brentford vs Manchester United below:

Liverpool manager Jurgen Klopp has confirmed striker Divock Origi will leave at the end of the season.The Belgium international has not played enough matches to trigger an extension to his contract and has been heavily linked with a move to AC Milan.Despite his lack of playing time Origi has become something of a cult hero to the Kop after his goals against Everton, particularly his 96th-minute winner at Anfield in December 2018, and his double in the famous 4-0 Champions League semi-final comeback against Barcelona.Asked about what send-off the players who could leave in the summer – veteran midfielder James...
PREMIER LEAGUE・1 HOUR AGO
The Independent

Manchester City and Liverpool will battle to be crowned Premier League champions on Sunday, while either Burnley or Leeds will be relegated.Moreover, authorities will hope there is no continuation of the violent pitch invasions which are blighting English football.Here, the PA news agency picks out five of the main talking points going into the final day of the top-flight season.Title tussleA fascinating two-horse race is poised for a thrilling climax. Manchester City are in pole position ahead of hosting Aston Villa – a point better off than quadruple-chasing Liverpool, who welcome Wolves to Anfield. There are also plenty of intriguing...
PREMIER LEAGUE・1 HOUR AGO
The Independent

The 2021-22 Premier League is almost over and that means it is time for our team of the season.We asked our football writers to select their preferred formation and best XI of the campaign, before adding up the votes to create The Independent’s team of the season.Unsurprisingly, players from Liverpool and Manchester City make up seven of our final XI, as the two standout teams who are still battling for the title on the final weekend. Tottenham offer up a deadly attacking duo, Chelsea give us a tenacious centre-back, and West Ham’s box-to-box maestro takes up the final spot in...
PREMIER LEAGUE・4 HOURS AGO

Jurgen Klopp believes Mohamed Salah and Virgil van Dijk are on course to be ready for the Champions League final but will not gamble on his top scorer’s fitness on Sunday when Liverpool go for the Premier League title and the Egyptian could win the Golden Boot.Salah and Van Dijk both missed Tuesday’s 2-1 win over Southampton after coming off in the FA Cup final with groin and knee injuries respectively and they face a race against time to feature against Wolves at Anfield.Klopp said it would be his preference to field each this weekend to get them match sharpness...
PREMIER LEAGUE・3 HOURS AGO
The Independent

Charles Leclerc will be hoping he can return to winning ways at the Spanish Grand Prix this weekend as he looks for a third victory of the season.Reigning world champion Max Verstappen became the first driver to secure back-to-back wins in the 2022 season when he followed up his Emilia Romagna GP triumph with another victory in Miami.However, the Red Bull driver remains 19 points adrift of Leclerc in the drivers’ standings due to his two reliability failures in Bahrain and Melbourne.LIVE: Follow practice from Spanish Grand PrixSo, if it is another battle between Leclerc and Verstappen this weekend, who...
MOTORSPORTS・2 HOURS AGO