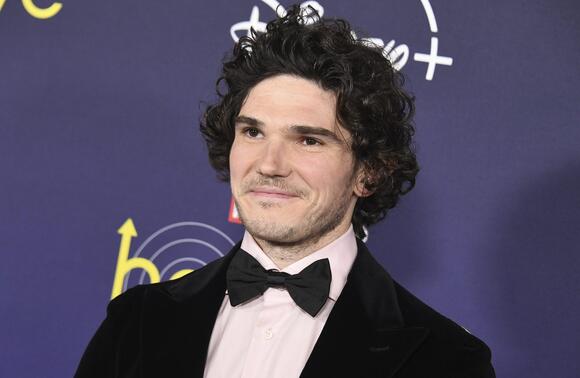 Fra Fee is staying in business with Disney Plus with a role in the upcoming “ Beauty and the Beast ” prequel series, Variety has learned exclusively.

The live-action musical series was ordered at the streamer in June 2021. It stars Luke Evans and Josh Gad, who will reprise the roles of Gaston and LeFou (Louie) respectively from the 2017 live-action “Beauty and the Beast” film. In addition, newcomer Briana Middleton will play Tilly, Louie’s stepsister. Set in the iconic kingdom of “Beauty and the Beast” years before the Beast and Belle’s romance, the series will follow Gaston and LeFou as they set off with Tilly after a surprising revelation from her past comes to light, sending the trio off on an unexpected journey.

Fee will star as Prince Benoit Berlioz, a childhood friend of Tilly’s who has grown into a handsome, charismatic, confident prince.

Fee was most recently seen in the Marvel-Disney Plus series “Hawkeye” in the role of Kazi Kazimierczak, a member of the Tracksuit Mafia and close friend of Maya Lopez, a.k.a. Echo. He also recently appeared in the Acorn TV series “Dalgliesh.” On the big screen, Fee is known for his roles in the live-action “Cinderella” starring Camila Cabello as well as the 2012 adaptation of “Les Misérables,” “Pixie” opposite Olivia Cooke, and “Animals” opposite Alia Shawkat among others.

He is repped by Paradigm, Untitled Enteratinment, Dalzell and Beresford, and Goodman Genow.

Disney Plus has given the “Beauty and the Beast” series an eight-episode order. It was developed, executive produced and written by Gad, Edward Kitsis and Adam Horowitz with each serving as a co-showrunner. Evans will also executive produce in addition to starring. Liesl Tommy, the first Black woman ever nominated for a Tony Award for Best Direction of a Play, will executive produce and will direct the first episode. The project will also feature an original soundtrack from the legendary composer Alan Menken, who will also serve as executive producer. The lyrics for the first episode will be by Glenn Slater. Production will begin in spring 2022. ABC Signature will produce.

Marnie Schulenburg, ‘As the World Turns’ Star, Dies at 37

Click here to read the full article. Marnie Schulenburg, known for her roles in soap operas “As the World Turns” and “One Life to Live,” died Tuesday in New York due to a complication from breast cancer, a representative confirmed to Variety. She was 37. Schulenburg’s husband Zack Robidas, an actor known for his roles in “Sorry for Your Loss” and “Succession,” also confirmed the news via a Facebook post, in which he thanked her fans for their support after Schulenburg’s diagnosis. “Please don’t say Marnie lost her battle to cancer. It’s simply not true. I watched her kick cancer’s ass everyday...
CELEBRITIES・2 DAYS AGO
Variety

Click here to read the full article. The “Yellowstone” spinoff series “6666” is joining the mothership show on Paramount Network. It was previously reported that the new show would air exclusively on Paramount+. It will now run on the linear network first before episodes are made available to stream on demand. A premiere date has not been set. “6666” was originally announced in February 2021 as one of several new shows on the development slate of “Yellowstone” co-creator Taylor Sheridan. The show takes place at the real 6666 ranch in Texas. It was featured in Season 4 of “Yellowstone,” with Jimmy (Jefferson...
TV SERIES・2 DAYS AGO
Variety

‘Bridgerton’ Star Charithra Chandran on How Colorism Made Her Avoid the Sun for Years: ‘It’s a Daily Struggle’

Click here to read the full article. “Bridgerton” star Charithra Chandran is sitting at Netflix’s FYSEE experience at Raleigh Studios in Los Angeles with her fellow Indian co-star Simone Ashley, where they talked about their instantly beloved roles as sisters in the second season of the hit Netflix series. “Bridgerton” has been praised for its diverse cast, but the applause amplified even more when Chandran and Ashley joined Season 2 because they have darker skin than the Indian actors who are traditionally cast in Hollywood for significant roles. “Coming to L.A., it was a profound moment because I spent my life avoiding...
LOS ANGELES, CA・2 DAYS AGO
Popculture

Tom Cruise on Why He Endangers His Life for Stunts: ‘No One Asked Gene Kelly, ‘Why Do You Dance?”

Click here to read the full article. Tom Cruise showed just why he’s the biggest movie star in the world with his 45-minute masterclass at the Cannes Film Festival. The sold-out crowd at the Grand Palais’ Debussy theater waited in line patiently for an hour under the blazing afternoon sun and could barely contain their impatience as festival director Thierry Fremaux introduced the event. They watched a montage of the actor’s most memorable scenes — set to Richard Strauss’ “Also sprach Zarathustra” — then broke out in frenzied applause during the famous lip-synching sequence from “Risky Business.” As soon as Cruise hit...
THEATER & DANCE・2 DAYS AGO
Hello Magazine

Robin Roberts got emotional as she opened up about her relationship with partner Amber Laign, especially in the midst of a challenging health battle. The Good Morning America star made an appearance on The Ellen DeGeneres Show to promote her new book, Brighter By the Day. VIDEO: Robin Roberts enjoys...
CELEBRITIES・25 DAYS AGO
TheStreet

Once again, Disney (DIS) - Get Walt Disney Company Report is finding itself embroiled in a political quagmire owing to its support of the LGBTQ community, after Florida Gov. Ron DeSantis punished Disney for denouncing his “Don’t Say Gay Bill,” by seeking to revoke Disney World’s designation as a special tax district (which as we pointed out, is ultimately a meaningless gesture).
FLORIDA STATE・24 DAYS AGO
Insider

From the gourmet meals and missions to the VIP perks and room with a droid, here's what the galactic experience was like — and why we'd do it again.
LIFESTYLE・25 DAYS AGO

Depp said he discovered Disney would not recast him in "Pirates" days after Amber Heard's Washington Post op-ed article was published.
FAIRFAX, VA・25 DAYS AGO
Variety

Click here to read the full article. Faith Hill will never forget one of her earliest auditions. She read for director Anthony Minghella for 2003’s “Cold Mountain” for the role that went to Natalie Portman. “I read, I believe, the rape scene and another one. It was intense,” Hill tells me on the new episode of the “Just for Variety” podcast. “I had been on a few readings, but nothing like that.” Not that she didn’t do her homework beforehand. “I worked my tail off to be prepared for that,” Hill said. “Because for me, personally, I thought I have got to prove...
CELEBRITIES・2 DAYS AGO
Outsider.com

She’s definitely embracing the Hawaii lifestyle, and now “NCIS: Hawai’i” star Vanessa Lachey is showing off her everyday surrounding to her Instagram followers. “Hawai’i = Home,” Vanessa Lachey declares in her latest social media post. The “NCIS: Hawai’i” star also shares a snapshot of her sitting in a breathtaking area in Hawaii.
HAWAII STATE・24 DAYS AGO
The Hollywood Reporter

“NCIS: Los Angeles” star Daniela Ruah absolutely killed it on the red carpet and stage last night at the International Portuguese Music Awards. While everyone at home was preparing for tonight’s “NCIS: Los Angeles” episode, Daniela Ruah was getting all dressed up to host the IMPA Awards. The ceremony took place at the Providence Performing Arts Center in Providence, Rhode Island, on Saturday, April 23.
LOS ANGELES, CA・26 DAYS AGO
People

Megan Fox wants her kids to express themselves however they please. In a wide-ranging interview with Glamour U.K. for their April cover story, the 35-year-old actress opens up about how she teaches her children, Journey River, 5, Bodhi Ransom, 8, and Noah Shannon, 9, about gender identity and encourages them to be confident in who they are.
FAMILY RELATIONSHIPS・24 DAYS AGO
The Independent

Johnny Depp found humour in a question asked during a Disney executive’s testimony in the ongoing defamation trial brought against ex-wife Amber Heard. In a pre-recorded deposition presented to the court on Thursday (19 May), Tina Newman – who works on the Pirates of the Caribbean franchise – was questioned about Depp’s future in a potential sixth film. “Do you know whether Mr Depp is being considered for a role in Pirates 6?” Heard’s lawyer inquired. To which Newman responded “I don’t know one way or another,” adding that the “decision does not fall within my job responsibilities. It’s...
MOVIES・1 DAY AGO
Outsider.com

Geroge Wendt, who played Norm on the classic TV show Cheers, decided to be like Jack when he was in public. We mean Jack Nicholson here. The famed movie actor seemingly did not mind being noticed when out among the non-Hollywood crowd. Nicholson’s attitude about this did ring a bell for Wendt during his show’s incredible run on NBC and in reruns today.
CELEBRITIES・24 DAYS AGO
Popculture

Spring is always a big time for engagements and weddings, and two beloved internet personalities are the latest to update their relationship status. On April 18, Rachel "Seltzer" Quirico revealed she and longtime boyfriend Trevor "TorcH" Housten were tying the knot after 17 years together. Both of them are beloved figures in the esports world, with Seltzer notably starring in the Syfy reality show WCG Ultimate Gamer. She's also hosted numerous esports tournaments and events for TV/streaming outlets; she also made a recent appearance on G4 TV's Boosted.
RELATIONSHIP ADVICE・25 DAYS AGO
Variety

Viola Davis Reveals a Director Called Her by His Maid’s Name, Speaks Out on Hollywood’s Slow Race Progress (EXCLUSIVE)

Click here to read the full article. Viola Davis joined Variety and Kering at the Cannes Film Festival for a powerful Women In Motion conversation in which she revealed a director once called her by his maid’s name. The Oscar and Emmy-winning actor was talking about Hollywood’s perception of Black actors and how the amount of roles she can play remains limited due to her skin color, even at her A-list stature. “I had a director who did that to me. He said, ‘Louise!’ I knew him for 10 years and he called me Louise and I find out that it’s...
CELEBRITIES・1 DAY AGO
PopCrush

90 Day Fiancé: Before the 90 Days star Johnny Chao is showing off a new look on social media. The reality TV star rocked a fresh-faced look on the show. However, Chao debuted some new facial hair in his most recent post on Instagram. More specifically, he grew a beard and mustache.
TV & VIDEOS・24 DAYS AGO
Variety

Click here to read the full article. (SPOILER ALERT: Do not read if you have not yet watched “The Train,” the May 17 episode of “This Is Us.”) The end is very near. During Tuesday’s penultimate episode of NBC’s “This Is Us,” the Pearson family gathered to see Rebecca (Mandy Moore) one last time on her deathbed. During the hour, as the family each said their goodbyes, Rebecca, in her dreams, saw Randall’s biological father, William (Ron Cephas Jones). He walked her through the train — hence the episode title — which included those in her life she loved the most...
TV SERIES・3 DAYS AGO