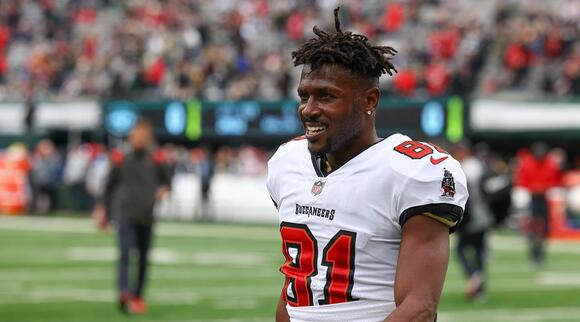 Arians was reportedly fined $50,000 for smacking one of his own player's on the helmet.

Former Buccaneers wide receiver Antonio Brown, who was was released by the team after a dramatic exit in the middle of a game, decided to comment on the hot water his former coach finds himself in. A video of Tampa Bay coach Bruce Arians made the rounds on Twitter that showed the coach smacking safety Andrew Adams on the helmet during Sunday's wild-card game.

Brown responded to the video with just, “Pit not the palace,” the title of the rap song he released shortly after he left during the third quarter of a game against the Jets on Jan. 2.  In the middle of the game, he took off his pads and shirt then jogged off the field.

It was later reported by NFL Network that Brown didn't believe his ankle was healthy enough to play after he had been nursing an injury. When asked why Brown exited, Arians said Brown was concerned about touches. Later, Brown released text messages purportedly sent to Arians that appeared to acknowledge Brown was dealing with the injury. In a statement, he also accused the team of a “cover-up” and that Arians pressured him to play in the game.

He went on to say he was injected with a “powerful and sometimes dangerous painkiller.” This directly contradicted Arians's postgame statement that Brown made no mention of the injury .

In a separate statement , Brown’s lawyer said he underwent an MRI, which revealed bone and ligament damage that would require surgery.

On Wednesday it was reported that Arians faces a $50,000 fine for the smack on one of his player's helmets, but he said he plans on appealing it.

“It ain't got nothing to do with the game,” Arians told reporters, per the Tampa Bay Times 's Rick Stroud .

For more Buccaneers news, head over to All Bucs .

The Rebels coach: I love the [GOAT] but Coach ………. U feeling Ok??”
OXFORD, MS・2 DAYS AGO
Sports Illustrated

The longtime college football commentator is preparing for his inaugural season calling NFL games on a regular basis.
NFL・2 DAYS AGO
Sports Illustrated

Reports surfaced on Sunday that the former Saints star was leaving his role as analyst for NBC after just one season.
NEW ORLEANS, LA・1 DAY AGO

A grand jury indicted former Georgia linebacker Adam Anderson on Tuesday and charged him with rape. Anderson will be arraigned
NFL・20 DAYS AGO
Sports Illustrated

During his second day in a row on ESPN’s shows, the Timberwolves guard had some choice words for Barnes.
NBA・1 HOUR AGO
Sports Illustrated

The Ravens franchise remains on the shoulders of Lamar Jackson and fantasy managers expect him to bounce-back.
BALTIMORE, MD・4 HOURS AGO

On Gronkowski’s 33rd birthday, his longtime quarterback hinted towards his impending decision as a free agent.
TAMPA, FL・2 DAYS AGO
Sports Illustrated

The former New Orleans quarterback caused a stir when he tweeted, “I may play football again.”
NEW ORLEANS, LA・23 HOURS AGO
Sports Illustrated

The former Saints quarterback will leave his studio role with the network after just one season.
NEW ORLEANS, LA・1 DAY AGO
Sports Illustrated

The All-Star point guard opened up about why he asked out of Cleveland in the summer of 2017.
CLEVELAND, OH・3 HOURS AGO

The Lions receiver wore No. 18 to honor Megatron during rookie minicamp.
NFL・2 DAYS AGO
Sports Illustrated

A popular sleeper pick before he got injured last year, J.K. Dobbins is among top values at running back in 2022.
HOUSTON, TX・2 HOURS AGO
Sports Illustrated

The 33-year-old spent time with the Chiefs and Steelers in 2021.
MIAMI, FL・1 DAY AGO
Sports Illustrated

Dallas’s owner had a clear message about the future of the Cowboys.
DALLAS, TX・1 DAY AGO
Sports Illustrated

Green Bay’s star corner will now be with the franchise through 2026.
GREEN BAY, WI・1 DAY AGO
Sports Illustrated