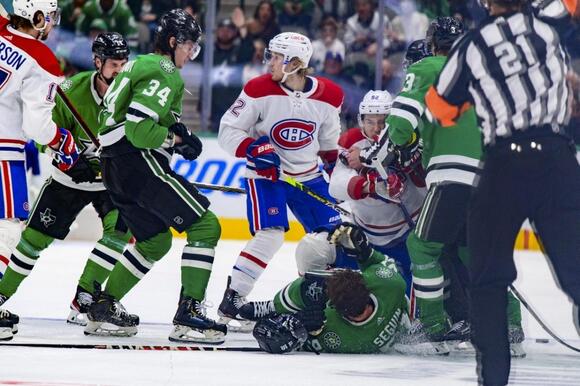 The NHL levied $5,000 fines against Montreal’s Jonathan Drouin and Phillip Danault of the Los Angeles Kings on Wednesday, the maximum fine allowed under the CBA.

Danault was fined for a dangerous trip on Tampa Bay’s Brayden Point. Drouin incurred his penalty for cross-checking Tyler Seguin of the Dallas Stars.

Drouin received a five-minute major and a game misconduct for the cross-check to Seguin’s head/neck area in Tuesday night’s game, won by the Habs. Drouin tallied an assist before being ejected. He has 20 points (six goals, 14 assists) on the season.

Danault was fined for his trip in the Kings’ loss to the Lightning, also Tuesday night. He has 22 points (10 goals, 12 assists) in 38 games this season.

It is only Game 2 of their Eastern Conference series, but the Florida Panthers are well aware the direction this
TAMPA, FL・20 HOURS AGO
Sportsnaut

Hurricanes tie it late, beat Rangers in OT in Game 1

Ian Cole scored 3:12 into overtime to lift the Carolina Hurricanes to a 2-1 win against the New York Rangers
RALEIGH, NC・13 HOURS AGO
Sportsnaut

Nothing gets the people going quite like the Stanley Cup Playoffs. Find out how to live stream every NHL Playoff game here.
NHL・52 MINUTES AGO
Sportsnaut

Tampa Bay Lightning forward Brayden Point has been ruled out for Game 2 of the Eastern Conference semifinal series against
TAMPA, FL・21 HOURS AGO

The Philadelphia Union continues to keep things even, playing to a 0-0 tie with visiting Inter Miami CF on Wednesday
FORT LAUDERDALE, FL・14 HOURS AGO
Sportsnaut

The Phoenix Mercury and Dallas Wings are trying to figure things out during the early stages of the WNBA season.
PHOENIX, AZ・16 HOURS AGO