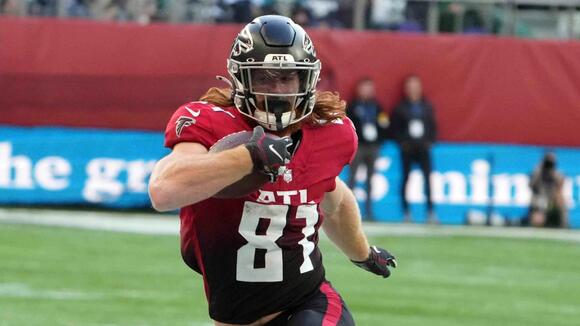 The Falcons must make a decision on their backup tight end.

Within the next two months, the Atlanta Falcons will evaluate whether to keep backup tight end Hayden Hurst.

Hurst, who turns 29 in August, becomes a free agent after the Falcons declined his fifth-year option ahead of the 2021 season. The declining of his option came just a few days after the team drafted Kyle Pitts with the No. 4 overall pick in the 2021 NFL Draft.

But that doesn't mean there isn't room for both of them in the Falcons offense. Or does it?

Hurst caught 26 passes for 221 yards in 13 games for the Falcons this past season, primarily used as a red-zone target. Out of his 26 receptions, three were touchdowns. Despite a whopping 110 targets, Pitts had only one score .

Hurst, who could be sought as a top tight end elsewhere, obviously benefitted from all the attention paid to Pitts. According to TruMedia , the Falcons ran two-tight end sets on 37 percent of the team's offensive plays.

Having Hurst on the field takes some of the defensive focus off Pitts, which is important in the offense especially if Calvin Ridley doesn't come back in 2022 .

The Falcons have always had someone to take play off their top receiver. Julio Jones was there for Roddy White. Then Ridley became the complement for Jones. Now, Pitts is that for Ridley. But with Ridley now likely on his way out, Pitts is becoming the top option and needs to have other options on the field so double teams avoid him.

Pitts proved in his rookie season how much of a problem he can be for opposing defenses, but there was also a sense that he could have accomplished more. In order for Pitts to take the next step, the team needs somebody with Hurst's archetype in the offense.

It might be difficult to maintain him, but having someone familiar with the offense in an important position with a decent-sized role wouldn't hurt.

The Falcons aren't looking too good in these power rankings.
ATLANTA, GA・2 DAYS AGO
Falcon Report

Which undrafted players have the best chance to play on Sundays?
ATLANTA, GA・1 DAY AGO

Jones was cut by the Tennessee Titans earlier in the offseason.
ATLANTA, GA・1 DAY AGO
Falcon Report

How high does the young Falcons star rank?
ATLANTA, GA・15 HOURS AGO