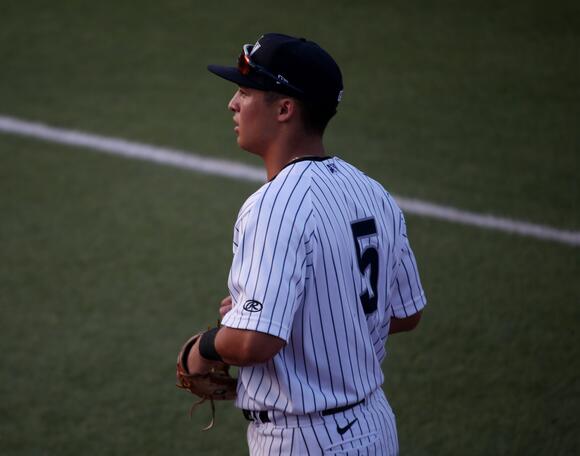 Baseball America released its new list of their Top 100 prospects on Wednesday, with the Yankees and Mets each boasting three entries.

The Yankees have a top-10 entry in shortstop Anthony Volpe, who continues to shoot up prospect lists despite not playing a game past High-A since being drafted in the first round of the 2019 June Amateur Draft. So far in his minor league career, the New Jersey native is slashing .276/.406/.548, and batted .294 with a .1027 OPS and 27 home runs in 109 games between low and High-A last season.

A fellow Yankee shortstop in Oswald Peraza came in at No. 55, as the two have been discussed at length this offseason as the Yanks decide how to upgrade the shortstop position at the major league level in 2022. Peraza, 21, saw brief time in Triple-A last season but spend the bulk of his year with Double-A Somerset, where he hit .296 with an .815 OPS and 12 home runs across 326 at-bats.

The final Yankee entry on the list is hyped outfield prospect Jasson Dominguez, ranking 87 th on the list. Dominguez got his first taste of pro ball last season and slashed .258/.346/.398 with five home runs with the Tampa Tarpons. The 19-year-old can see himself climb this list quickly as he gets more exposure after missing 2020 due to the COVID-19 pandemic and the ensuing minor league shutdown.

Shortstop prospect Ronny Mauricio rounds out the New York entries at No. 92, after the 20-year-old saw brief time at Double-A Binghamton last season. The bulk of his year was played at High-A Brooklyn, where he posted a .740 OPS with 19 home runs in 100 games.

Despite his two home runs the night before, MLB Network’s Brian Kenny made the case that Giancarlo Stanton is bad for the Yankees, who he says regret making that trade.
NEW YORK CITY, NY・2 DAYS AGO
WFAN Sports Radio

Paul Sewald gets win against Mets: 'They gave up on me'

Former Mets pitcher Paul Sewald picked up the win against his former team on Friday night: “They gave up on me, so it was pretty nice to get a little revenge.”
NEW YORK CITY, NY・2 DAYS AGO
WFAN Sports Radio

With both teams off to terrific starts, Gio and Jerry stacked up the current Yankees and Mets with their best teams ever, 1998 for the Yanks and 1986 for the Mets.
NEW YORK CITY, NY・2 DAYS AGO
WFAN Sports Radio

There was supposed to be a ceremonial first pitch at Citi Field on Friday night, but Max Scherzer began his warm-ups and locked in before it could happen.
NEW YORK CITY, NY・2 DAYS AGO

Yankees manager Aaron Boone said the issue is something Rortvedt has dealt with in the past, and he will see Dr. Christopher Ahmad after being shut down two games into a rehab assignment for his oblique strain.
NEW YORK CITY, NY・18 HOURS AGO
WFAN Sports Radio

IKF made a ‘bad read’ when thrown out trying to advance from second to third on Kyle Higashioka’s sacrifice fly, turning a possible one-out, runner on second situation into a killed rally for the Yankees.
NEW YORK CITY, NY・1 DAY AGO

Buck Showalter raves about Max Scherzer: 'It's just an honor to watch him pitch'

Jacob deGrom having latest MRI Monday, Mets hopeful he can ramp up activity

Depending on the results of his MRI and CT scan, deGrom may be cleared to begin throwing bullpens, but he is still likely at least a month away as a conservative estimate.
NEW YORK CITY, NY・12 HOURS AGO
WFAN Sports Radio

Chapman, Boone deny Chappy 'rattled' by Tim Anderson on base before blown save Saturday

To the naked eye, it looked like Tim Anderson’s one-out single in the ninth rattled Aroldis Chapman, who was rushed and wild against his final two batters - but both Chappy and Aaron Boone disagree.
NEW YORK CITY, NY・1 DAY AGO
WFAN Sports Radio

Manager Buck Showalter had a pretty blunt synopsis of what the reaction is when a team goes through a rough stretch: “Nobody cares about your problems – they’re happy you got them.”
NEW YORK CITY, NY・1 DAY AGO

Monday night’s game was postponed due to the threat of severe weather in the NYC area, so the teams will play a single-admission doubleheader beginning at 3:10 p.m. Tuesday.
NEW YORK CITY, NY・15 HOURS AGO
WFAN Sports Radio

Holderman woke up early Sunday for breakfast, thinking he’d be pitching for the Syracuse Mets in Scranton. Instead, he was soon in a 2010 Camry Ubering from the team hotel to Queens to make his MLB debut.
DENVER, CO・15 HOURS AGO
WFAN Sports Radio

The Mets are in first place with the best winning percentage in the National League, but Tierney says they are in trouble if they don’t add a big bat.
NEW YORK CITY, NY・2 DAYS AGO
WFAN Sports Radio

After saying nobody would buy one, every Mets player now has Travis Jankowski jersey

Travis Jankowski said last week that nobody was going to be buying his jersey. Now, all of his teammates were given one in the Mets clubhouse.
NEW YORK CITY, NY・2 DAYS AGO