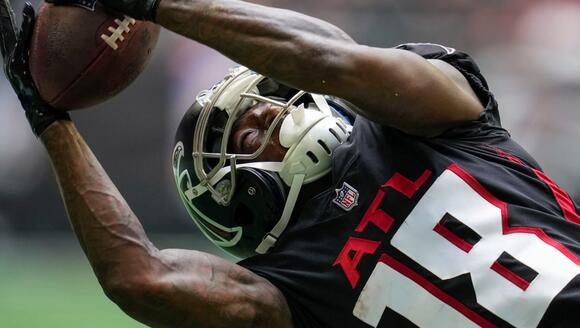 'I would not be surprised at all to see WR Calvin Ridley dealt to the New England Patriots this offseason,' says NFL insider

On the heels of a national report on Calvin Ridley - who walked away from the Atlanta Falcons for the second and final time on Halloween for personal reasons - being traded ... comes some educated speculation about a destination.

Ridley had previously missed the Falcons trip to London and a win over the New York Jets on October 10, but he returned after a bye week to play against the Miami Dolphins on October 24.

Ridley informed the Falcons on game day against the Carolina Panthers on October 31 that he was stepping away from football, and he didn't make another appearance with the team in 2021 .

Both Ridley and the Falcons have maintained radio silence since issuing his statement during the Panthers game, but NFL Network reporter Mike Garafalo believes a trade is in the works for the Falcons and Ridley.

And now comes Benjamin Albright, who covers the NFL from his base in Denver, writing , "Would not be surprised at all to see WR Calvin Ridley dealt to the New England Patriots this offseason.''

And from NFL Network's Mike Garafalo before that? "My educated prediction," said Garafalo on Good Morning Football, "is that Calvin Ridley is elsewhere for the 2022 season ...''

The Falcons picked up the option year on Ridley's rookie contract worth $11.1 million in 2022, but because he was placed on the non-injury list for 2021, the Falcons can roll over his fourth-year which was $1.97 million.

That means the Falcons could still have two years of control for Ridley. His fourth-year, which didn't vest in 2021 because of his absence, and his fifth-year option.

Assuming Ridley is healthy, his trade value has taken a hit. We might argue that the 27-year old receiver might be able to garner a third-round draft pick and maybe a second-round pick in a trade. It helps that the team trading for him could have him for two years and roughly $13 million.

And now there is some buzz on who that team might be.

He visited with the Falcons earlier this offseason, but Landry signs with the enemy.
ATLANTA, GA・2 DAYS AGO
Falcon Report

Follow along with Falcon Report for up-to-date news on the NFL firings and hirings
ATLANTA, GA・2 DAYS AGO
Falcon Report

The Falcons have made a few moves in the wide receiver department lately.
ATLANTA, GA・1 HOUR AGO

These dates definitely need to be circled.
ATLANTA, GA・1 DAY AGO
Falcon Report

Follow along with Falcon Report for up-to-date news on the NFL firings and hirings
ATLANTA, GA・4 HOURS AGO
Falcon Report