Former first-round draft pick Kaleb McGary has failed to live up to expectations since the Falcons traded up to take him with the 31st overall pick out of Washington in the 2019 NFL Draft.

McGary was credited (or blamed) with giving up nine sacks on the season, tied for the second most among tackles, left or right, in the NFL. His overall grade of 62.4 from Pro Football Focus (PFF) was bolstered by his 71.4 run blocking grade. His 50.6 pass blocking grade was graded 116th among offensive tackles.

Finishing 116th when there are 64 starting positions is quite the feat. It means there should be plenty of available upgrades around the league who aren't first choice at left or right tackle for their respective teams.

Ideally, McGary would play up to the potential of a first-round pick, but that looked less likely each passing week. McGary turns 27 in February, and the Falcons will probably let him walk when his rookie contract expires after next season.

Key reserve Matt Gono missed the entire season with injury. The Falcons didn’t get a lot of value for the one-year, $3.4 million contract they signed him to before the 2021 season. In 2020, Gono logged time at right tackle and left guard, two particular sore spots for the Falcons this past season.

The Falcons don’t have a lot of money to spend, but with Gono’s money coming off the books, there are upgrades to be had at right tackle in free agency at a relatively low cost.

The Falcons must get better play from the right tackle position in 2022. There are several affordable free agents what would be an immediate upgrade on McGary’s play this past season.

Here is a look at several targets the Falcons should be interested in at right tackle this offseason ...

This one might be a pie in the sky for the Falcons, but the former third-round pick of the Steelers is set to hit free agency after a breakout season in the final year of his contract.. Just 24-years old, Okorafor allowed just two sacks at right tackle for the Steelers.

He should be able to earn at least double his salary as a free agent this offseason. $5 million is a number the Falcons could likely afford, but 24-year old tackles with his credentials tend to get a bit pricier in free agency.

The Falcons' need for a quality No. 2 wide receiver could have them selecting this A.J. Brown-type talent.

Kelly would be a good veteran presence to have on the team while McGary plays out the final year of his rookie contract. He played on a one-year deal in 2021 for the Packers and started the final four games of the season.

There’s familiarity with Kelly and Falcons head coach Arthur Smith as Kelly spent five years with the Tennessee Titans before playing with the Packers this year.

Massie was a last-minute signing for the Broncos after Ja'Wuan James suffered a season-ending injury working out on his own prior to the season. He was serviceable in his 13 starts for the Broncos, yielding just five sacks.

He spent four years in Chicago with Falcons’ offensive coordinator Dave Ragone. The Broncos could look to upgrade their right tackle position while letting Massie walk, and he would be an upgrade on McGary.

The third offensive tackle for the Broncos behind Massie and Garrett Bolles, Fleming is also set to be a free agent after the season. Denver may opt to bring one or both back, but they’ll also be looking for an upgrade at right tackle through free agency and the draft making one or both expendable.

Fleming started four games for the Broncos at right tackle in place of Massie and didn’t allow a sack. Fleming has seen time with the Patriots, Cowboys, and Giants as well as the Broncos and has started 46 games in his eight-year career.

Lucas started seven games for Washington in 2021, and he gave up three sacks. His 75.1 grade from PFF puts him 29th out of 84 tackles in the NFL. Lucas split time with rookie Samuel Cosmi and could be looking for another shot to be the full-time starter.

Like Massie, Lucas was in Chicago with Ragone in 2019.

The Falcons could look to plug a hole with a veteran or address right tackle in the draft, but change is coming. 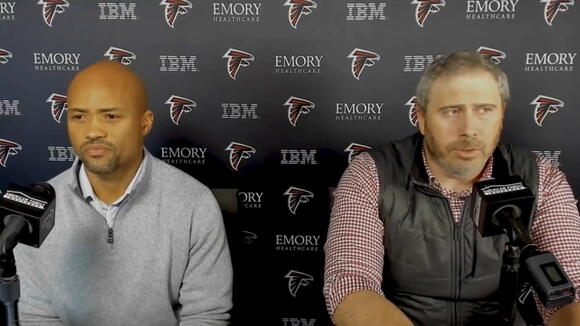 John Ruiz believes the Alabama coach was way off base with his comments.
MIAMI, FL・1 DAY AGO

The sophomore already has sparked interest from 13 colleges.
NFL・2 DAYS AGO
Sports Illustrated

Greg Olsen keeping the seat warm for Tom Brady could lead to some wild scenarios.
NFL・2 DAYS AGO
Sports Illustrated

A tit-for-tat exchange between the Seahawks and Vikings in 2006 led the league to outlaw the cost-spiking strategy that's recently been in the news for other reasons.
SEATTLE, WA・2 DAYS AGO

The Giants wideout is reportedly expected to be ready for training camp in July.
EAST RUTHERFORD, NJ・1 DAY AGO
Sports Illustrated

The Cleveland Browns continued to make moves this offseason, this time bringing back DE Jadeveon Clowney on a one-year deal. Clowney’s return, along with his encouragement to Deshaun Watson to waive his no-trade clause, is a big part of what the team hopes to be on the defensive side of the ball.
CLEVELAND, OH・26 MINUTES AGO
Sports Illustrated

The journeyman QB revealed the Bucs captain snubbed him on more than one occasion.
NFL・2 DAYS AGO

Saban Doubles Down on Call for ‘Parity’ in College Athletics

The Alabama coach expanded on his comments regarding parity in college athletics as he appeared on ESPN+’s coverage of the PGA Championship on Saturday.
COLLEGE STATION, TX・1 DAY AGO
Sports Illustrated

SI:AM | Nick Saban vs. Jimbo Fisher Is a ‘Full-Fledged War’