Troy Aikman Critical of Cowboys’ Play-calling in Loss to 49ers 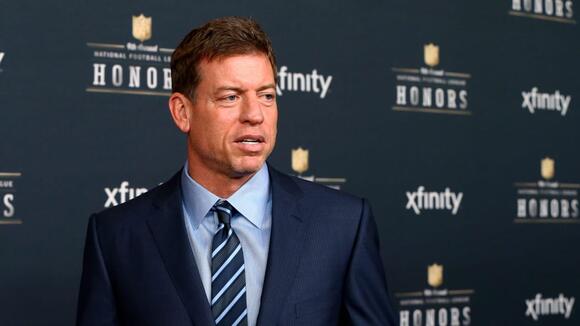 The Fox analyst wasn't happy with the lack of targets for one Dallas receiver.

Dallas's offense wasn't exactly electric on wild-card weekend, as the Cowboys exited the playoffs in a 23-17 loss to the 49ers.

Dak Prescott & Co. managed just seven points before the fourth quarter, tallying 77 yards on the ground on 21 carries. One former Cowboys player was less-than-impressed with the team's output on Sunday, highlighting the lack of targets for one marquee receiver.

”There was a lot of single coverage on CeeDee Lamb,” Fox analyst and former Cowboys quarterback Troy Aikman said on 96.7FM The Ticket in Dallas on Wednesday. ”I hate going back to [when I was playing] because nobody cares, but what I see around the league—it's not just Dallas, I've seen it with a lot of teams—a lot of these offenses want to scheme things.”

”[Michael Irvin] would've had 10 catches at halftime if they played us the way they played CeeDee Lamb in that game. ... The game is not that difficult. If I've got a great player at wide receiver and a corner is playing him in single coverage, throw him the ball. He's going to win most of the time.”

Lamb managed just one catch for 21 yards against San Francisco, continuing a streak of quiet performances. The Oklahoma product tallied just 10 catches in his final four games in 2021, and his last touchdown of the season came on Nov. 14 against the Falcons.

Dallas now holds a 27-year Super Bowl drought after exiting the playoffs. The 49ers will face the Packers in the divisional round, with kickoff on Saturday slated for 8:15 p.m. ET.

For more Cowboys news, head over to Cowboy Maven .

Brendan Langley, who was drafted in the third round of the 2017 NFL draft and mostly played special teams, was arrested after the encounter.
NFL・20 HOURS AGO
Sports Illustrated

The former teammate of James addressed the rumors about the superstar’s impact in roster building.
CLEVELAND, OH・2 DAYS AGO
Sports Illustrated

The Bills are doing their part to help the Buffalo community heal.
BUFFALO, NY・1 DAY AGO
Sports Illustrated

He’s reportedly making his first stop during the first week of June.
FOOTBALL・1 DAY AGO

San Francisco is still looking to find a trade partner for its quarterback.
SAN FRANCISCO, CA・1 DAY AGO
Sports Illustrated

The six-time All-Star was ruled for the rest of Saturday’s contest against the Celtics after logging 20 minutes in the first half.
MIAMI, FL・2 DAYS AGO
Sports Illustrated

The five teams with the hardest schedules in the 2022 season are from the same two divisions.
KANSAS CITY, MO・23 HOURS AGO
Sports Illustrated

But how will change at QB affect Pittsburgh’s pass catchers?
PITTSBURGH, PA・1 DAY AGO

The Alabama fan couldn’t help himself and took a jab at the Texas A&M coach after winning the PGA Championship.
COLLEGE STATION, TX・23 HOURS AGO
Sports Illustrated

Dallas‘s forward wore the same color as the Warriors for two straight games on the bench.
DALLAS, TX・1 DAY AGO
Sports Illustrated

NFL owners are reluctant to set a precedent for removing one of their own, but they could be moved to do so pending an ongoing investigation. Plus, insight on Kyler Murray and Aaron Donald skipping OTAs, the Colts’ decision to sign Nick Foles and more.
INDIANAPOLIS, IN・17 HOURS AGO

The second-year head coach has liked what he’s seen (and heard) from his team this offseason. Plus, how the Bills have been there for their community and more.
NFL・1 DAY AGO
Sports Illustrated

The 41-year-old has ultimately decided to stay on the sidelines.
NFL・1 DAY AGO

The Michigan coach was pursued by the Lakers for their head coaching vacancy.
LOS ANGELES, CA・1 DAY AGO
Sports Illustrated

Both made epic entrances to their latest pregame shows.
NBA・1 DAY AGO