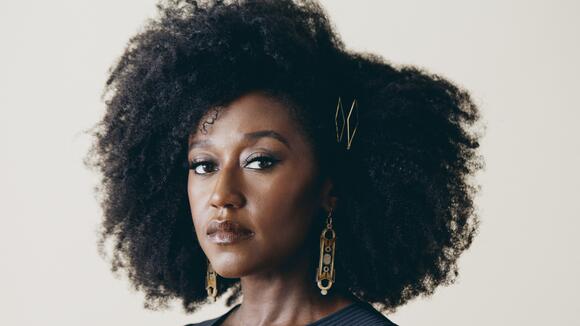 EXCLUSIVE: Nana Mensah , the writer, director, producer and actress who made her feature debut with Queen of Glory , has signed with WME for representation.

In the comedy, which premiered in U.S. Narrative Competition at the 2021 Tribeca Film Festival, the Ghanaian-American multihyphenate stars as Sarah, who looks to abandon her Ivy League doctoral program to follow her married lover across the country. The film netted Mensah the festival’s award for Best New Narrative Director and its Special Jury Prize for Artistic Expression, as well as the Mill Valley Film Festival’s inaugural Mind the Gap Creation Prize.

Mensah was a staff writer on Season 2 of HBO’s late-night sketch series Random Acts of Flyness and is currently writing on Amazon’s The Power . She co-wrote and co-starred in Season 2 of Netflix’s Bonding , and appeared last fall in a series regular role opposite Sandra Oh and Bob Balaban in Netflix’s half-hour comedy, The Chair. Mensah also appeared in Judd Apatow’s comedy The King of Staten Island , starring Pete Davidson, and will soon be seen in Kogonada’s Sundance 2022 title After Yang. She has also featured on the TV side in 13 Reasons Why , Little America , Evil , New Amsterdam and Madam Secretary , among other series.

Last fall, Mensah reprised her role as Dede in the Off-Broadway play Nollywood Dreams at the MCC Theater. She’s also known on the theater side for her turn in Tracy Letts’ Man From Nebraska , having received a Lucille Lortel Award nomination for her performance in the production directed by David Cromer.

Click here to read the full article. John Aylward, an actor best known for his portrayals of Dr. Donald Anspaugh on ER and former DNC chairman Barry Goodwin on The West Wing, died this week at his home in Seattle. He was 75. Aylward’s death overnight Monday was confirmed by his wife Mary Fields to his longtime agent, Mitchell K. Stubbs. He had been in declining health, according to Fields. “I was shocked. He was a wonderful actor and a phenomenal human being,” Stubbs told Deadline. “He was a dream client, a friend and a dream person.” Hollywood & Media Deaths In 2022: Photo...
SEATTLE, WA・2 DAYS AGO
Deadline

Click here to read the full article. Sarah Wayne Callies, James Saito, Tim Chiou, Freda Foh Shen and Felisha Terrell are set as leads in ABC drama pilot The Company You Keep, starring Milo Ventimiglia and Catherine Haena Kim, from 20th Television. The project, which is based on Korean format My Fellow Citizens that ran for more than 30 episodes on KBS2, follows con man Charlie (Ventimiglia) and undercover CIA officer Emma (Kim). A night of passion leads to love between the pair, who unknowingly are on a collision course professionally. While Charlie ramps up the “family business” so he...
NFL・1 DAY AGO
Deadline

Click here to read the full article. EXCLUSIVE: Here is the first trailer for movie Peter Five Eight, marking the first footage released at a market for a Kevin Spacey project in almost five years. Pic follows Sam (Jandreau), a seemingly poised and glamorous real estate agent in a small mountain community who is revealed to be an unhinged and troubled alcoholic with a dark secret. Spacey will play “a charismatic” stranger who arrives out of the blue at the behest of his powerful and shadowy boss, Mr Lock. The completed project is being handled for worldwide sales by VMI International. Rebecca De Mornay, Jet...
NFL・2 DAYS AGO
Deadline

Click here to read the full article. George Miller told press today in Cannes that his new film 3000 Years of Longing is a fantasy story that is “open to interpretation.” Five years after Mad Max: Fury Road, Miller has brought a very different kind of film to Cannes, where he enjoyed a standing ovation following the screening last night on the Croisette. Adapted from a 1994 AS Byatt novella, Three Thousand Years of Longing stars Tilda Swinton as narratology professor Alithea who encounters a genie – the Djinn, played by a pointy-eared Idris Elba. The film flips between their conversation in...
NFL・13 HOURS AGO

Click here to read the full article. Four-time Oscar winner Ethan Coen has spoken out about the reasons behind his recent hiatus from filmmaking, as well as his return with the documentary Jerry Lee Lewis: Trouble in Mind, which makes its world premiere at the Cannes Film Festival on Sunday. Coen had been making films with his brother Joel for decades by the time news broke that he wouldn’t be involved with his recent Apple feature The Tragedy of Macbeth—spurring curiosity as to whether he might be done with filmmaking for good. The split of the iconic Coen Brothers, behind such...
NFL・2 HOURS AGO
Hello Magazine

Robin Roberts got emotional as she opened up about her relationship with partner Amber Laign, especially in the midst of a challenging health battle. The Good Morning America star made an appearance on The Ellen DeGeneres Show to promote her new book, Brighter By the Day. VIDEO: Robin Roberts enjoys...
CELEBRITIES・26 DAYS AGO
Deadline

Click here to read the full article. UPDATED: Celebrity TV Doctor Mehmet Oz will have to wait a few more weeks until he finds out whether he won or lost his bid to become the Republican nominee in the race for Pennsylvania’s empty Senate seat. While there is no official word, the Associated Press — long the gold standard in American election results — reported today that the contest between Oz and hedge fund CEO David McCormick “is too close to call and is likely headed for a statewide recount.” The AP reports the results may not be available until June 8,...
PENNSYLVANIA STATE・1 DAY AGO
Hello Magazine

Princess Eugenie has taken to her Instagram Stories to make an exciting announcement related to The Anti-Slavery Collective, which she co-founded with her best friend Julia de Boinville back in 2017. Resharing a message from the charity organisation, the mother-of-one revealed she was posting "news from my charity". WATCH: Princess...
CELEBRITIES・25 DAYS AGO

GENERAL Hospital revealed a major character change is coming to the show this week as one of its stars battles health issues. There are often comings and goings happenings on soaps, and the latest cast switch-up involves longtime cast member Nancy Lee Grahn. Nancy, who turns 66 on Thursday, has...
CELEBRITIES・26 DAYS AGO
Insider

Depp said he discovered Disney would not recast him in "Pirates" days after Amber Heard's Washington Post op-ed article was published.
FAIRFAX, VA・26 DAYS AGO
PopCrush

Last month it was revealed that Sharon Osbourne would be returning to television, partnered with Piers Morgan on a new U.K. series named The Talk. This comes nearly a year after Osbourne was suspended and eventually exited the U.S. talk show The Talk after expressing her support for Morgan in an intense discussion over race with co-host Sheryl Underwood. Now, in a new interview with the U.K.'s Sunday Times, Osbourne reveals how cancel culture impacted her as she eventually parted ways with her longtime daytime talk series amidst public backlash.
CELEBRITIES・26 DAYS AGO
Hello Magazine

The Today Show stars, including Hoda Kotb, Savannah Guthrie, and Craig Melvin, are reeling from the death of a beloved fellow Today host, one whose hiring onto the show made history at NBC studios. The co-hosts took a moment out of Monday morning's show to honor the legacy of Jim...
CELEBRITIES・26 DAYS AGO

Netflix has canceled another one of its major shows, with this one getting the ax after only two seasons. Variety reports that hit sci-fi drama Raising Dion has been dropped by the streamer, following its recent season debut. The news seems to have been revealed by series star Sammi Haney, who shared the news with fans on Instagram. "Sad to say that Raising Dion is CANCELED [sic] Thank you for all of the amazing support we got from all of our wonderful fans!" Haney wrote, in part. "Season 2 was a success, equal to Season 1, even if just looking at how many people watched all of it and wanted a season 3!"
TV SERIES・25 DAYS AGO
ComicBook

After weeks of silence, Chris Rock has finally addressed his now-infamous incident with Will Smith at March's 94th Annual Academy Awards. During another sold-out show at Baltimore's Lyric Performing Arts Center on Friday, Rock directly referenced the slap, but only spent a second on it before moving on with his set.
BALTIMORE, MD・27 DAYS AGO
hotnewhiphop.com

Kim Kardashian's ex-husband, Damon Thomas, continues to "wish her the best," despite any false narratives about their past relationship. The 51-year-old sat down with DJ Vlad, looking back at his marriage with now-billionaire businesswoman Kim Kardashian in the early 2000s. He believes he's played a "part in their journey," however, he doesn't want to be known as "Kim Kardashian's husband" and wants to "get in control of [his] narrative," as many people fail to recognize he has won Grammys and even made it to the Oscars.
RELATIONSHIPS・25 DAYS AGO
Deadline

Donald Trump Pays $110,000 In Fines After Being Held In Contempt Of Court — Update

Click here to read the full article. UPDATE: Former President Donald Trump has paid $110,000 in fines after being held in contempt of court by a New York judge. A spokesperson for the office of New York Attorney General Letitia James confirmed that Trump paid the fine on Thursday. He still must file additional paperwork to comply with Judge Arthur Engoron’s order that put additional fines on hold as long as Trump’s attorneys more fully detailed their efforts to search for Trump’s records and to explain the Trump Organization’s document retention policies. James is investigating the Trump Organization’s business practices. Trump’s legal...
POTUS・1 DAY AGO
Outsider.com

She’s definitely embracing the Hawaii lifestyle, and now “NCIS: Hawai’i” star Vanessa Lachey is showing off her everyday surrounding to her Instagram followers. “Hawai’i = Home,” Vanessa Lachey declares in her latest social media post. The “NCIS: Hawai’i” star also shares a snapshot of her sitting in a breathtaking area in Hawaii.
HAWAII STATE・25 DAYS AGO
hotnewhiphop.com

It seems Coi Leray is getting fed up with the drama. She and her father, Benzino, have not seen eye to eye for quite some time, and despite numerous attempts to mend their relationship, they keep ending up back at square one. Yesterday, 50 Cent, whose been feuding with Benzino...
CELEBRITIES・27 DAYS AGO
PopCrush

90 Day Fiancé: Before the 90 Days star Johnny Chao is showing off a new look on social media. The reality TV star rocked a fresh-faced look on the show. However, Chao debuted some new facial hair in his most recent post on Instagram. More specifically, he grew a beard and mustache.
TV & VIDEOS・25 DAYS AGO