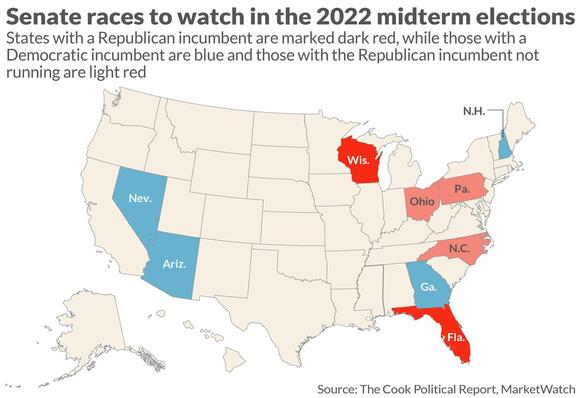 Republicans are widely expected to regain control of the U.S. House of Representatives in this November’s midterm elections, with betting market PredictIt giving an 85% chance for that outcome.

The GOP is getting good odds for taking back the U.S. Senate, too, as PredictIt puts them at 73% .

Having his Democratic Party lose its grip on both chambers of Congress would be a considerable setback for President Joe Biden. Analysts have said that could mean that “ all of the activity moves to regulation ” by the executive branch, including “much more aggressive actions as it relates to bank (KBE) regulation, energy (XLE) regulation, healthcare (XLV) regulation, antitrust regulation.”

See: ‘Severe struggle’ over federal debt limit and moves to impeach Biden: What could happen in a Republican Congress

So which Senate races are worth tracking, as 34 seats in that 100-member chamber are up for grabs this year?

The nonpartisan Cook Political Report has tagged nine races as competitive as of mid-January, with ratings such as “Toss up” or “Lean D.” Cook views the other 25 contests as not competitive, labeling them as either “Solidly D” or “Solidly R.”

The table below lays out the nine races that bear watching.

Primary elections will be held this year to determine the parties’ candidates.

Related: Bridgewater names new co-CEOs as McCormick steps down to run for Senate in Pennsylvania

Republicans just need a net gain of one seat to take control of the Senate, as they currently hold 50 seats. Democrats’ grip on the 50-50 chamber comes only because Vice President Kamala Harris can cast tie-breaking votes.

“It is a sign of just how dire the situation is for Democrats that their best shot at keeping the Senate and limiting their losses in the House is the propensity of their opponents to nominate candidates who frighten suburbanites more than they do,” said Matthew Continetti, a resident fellow at the American Enterprise Institute, a conservative-leaning think tank, in a recent National Review op-ed .

“Even so, the various weaknesses of the Republican Party may not be enough to save the Democrats.”

Democrats seized control of the Senate just one year ago, as their two candidates in Georgia defeated incumbent Republicans in the state’s runoff elections on Jan. 5, 2021.

Democrats took control of the House in the 2018 midterm elections, and they currently hold 221 seats in that chamber vs. the GOP’s 212.

Now watch: Will the Biden administration’s unfinished agenda be enough to carry Democrats through the midterms?

Can't wait. Let's get rid of these Demokkrats. Also, if the Republicans take the Government back, we should be allowed to punch all Libtards that cry about it.

If course they will win both, there’s no question and them in 3 years we will get the White House back and hopefully that will put an end to democraps forever!!!

America needs to go back to the hanging chad voting machines and citizenship requirement Voter ID and only True Absentee Ballot Voting!

Democrats' Chances of Beating GOP for Control of Congress: Polls

Greene testified on Friday that she didn't recall whether she asked Trump to invoke military rule, despite telling Meadows to relay the idea to Trump.
ATLANTA, GA・21 DAYS AGO
WXIA 11 Alive

ATLANTA — Georgia's 2022 Senate race is shaping up as a close one in which incumbent Sen. Rev. Raphael Warnock holds an edge of retaining his Senate seat, a new 11Alive poll shows. The poll surveyed nearly 1,300 likely November general election voters in Georgia between April 22-27. It...
GEORGIA STATE・18 DAYS AGO
Daily Mail

A majority of Republicans believe the Capitol riot was an ‘act of patriotism’ while BOTH Democrats and GOP fear the other will try to 'OVERTURN' election results: New poll highlights partisan divisions as midterm races loom

A majority of Republican respondents to a new poll believe the January 6th attack on the US Capitol was an 'act of patriotism,' while both GOP and Democrat voters are concerned the other will act to overturn an election if it doesn't work out in their party's favor. Political divisions...
PRESIDENTIAL ELECTION・29 DAYS AGO

When President Joe Biden named Kamala Harris as his running mate, he promised his former campaign rival would be one of the most influential voices in the White House.
PRESIDENTIAL ELECTION・21 DAYS AGO
Daily Mail

Senator Lindsey Graham has said he was wrong to describe Joe Biden as 'the best person' to lead the country after the January 6 insurrection. Graham was recorded speaking to New York Times reporter Jonathan Martin on the day of the riot itself. Martin has written a new book with...
PRESIDENTIAL ELECTION・4 DAYS AGO
The US Sun

ANOTHER batch of stimulus checks worth up to $1,200 is set to go out to thousands of Americans this month. Under California’s Golden State I (GSS 1) and Golden State Stimulus II (GSS II) programs launched in 2021, eligible residents are getting up to $1,100 and $1,200 respectively. In...
CALIFORNIA STATE・28 DAYS AGO
Salon

Sen. Susan Collins, R-Maine, suggested on Tuesday that Supreme Court Justices Neil Gorsuch and Brett Kavanaugh lied to her about their stance on abortion. Her comments come just a day after Politico published a leaked copy of the Supreme Court's initial draft majority opinion on Roe v. Wade, the landmark 1973 ruling that enshrined the constitutional right to abortion. The draft strongly indicates that the high court will ultimately rule against the law, rolling back decades of progressive advocacy aimed at expanding abortion across the country.
CONGRESS & COURTS・13 DAYS AGO

EXCLUSIVE: A group of Republican senators is introducing legislation to block the Biden administration from sending personnel and funding from the Department of Veterans Affairs (VA) to alleviate the crisis at the southern border. The senators are alarmed by the Biden administration's announced termination of Title 42 on May 23,...
CONGRESS & COURTS・20 DAYS AGO
The Independent

The Tennessee Republican Party has kicked three candidates off the ballot in the race for the new Fifth Congressional District, including a candidate endorsed by former President Donald Trump. Morgan Ortagus, Baxter Lee, and Robby Starbuck were removed from the ballot after a vote by the GOP’s executive committee, Tennessee Republican Chairman Scott Golden said on Tuesday, according to the Nashville Tennessean. Last week, Republican officials said that challenges had been filed against the three candidates, leading to a technical removal from the ballot in accordance with party bylaws. Ms Ortagus, who has Mr Trump’s backing after serving as...
PRESIDENTIAL ELECTION・26 DAYS AGO
BIN: Black Information Network

A federal judge cleared the legal path for Georgia voters to stop Greene from being able to run for re-election. The Georgia rep was stripped of her committee assignments over racist comments she made online.
GEORGIA STATE・26 DAYS AGO
The Independent

A legal effort to ban Marjorie Taylor Greene from standing for re-election has been given the go-ahead by a federal judge, who denied the far-right Georgia congresswoman’s attempt to have the case against her thrown out – paving the way for further proceedings by the end of this week.The news led Ms Taylor Greene to complain that “I have to go to court on Friday and actually be questioned about something I’ve never been charged with and something I was completely against.”Ms Greene, a hardline pro-Trump Republican who has long circulated false conspiracy theories, is accused by campaigners of...
CONGRESS & COURTS・27 DAYS AGO

Donald Trump has already made it known that he enjoys watching Rep. Kevin McCarthy, R-Calif., grovel way too much to destroy the House Minority Leader's status or future hopes of regaining the Speaker role. He's already played the part of the magnanimous tyrant granting absolution to McCarthy for a leaked tape showing that McCarthy wanted Trump to resign after Trump incited an insurrection at the Capitol on January 6, 2021. On Tuesday, however, New York Times reporters released another recording of McCarthy from January 10, 2021, in which he complained about the more overtly insurrectionist members of the Republican caucus.
CONGRESS & COURTS・18 DAYS AGO
HuffPost

A federal judge opens the way for a dramatic showdown to determine the future of the Republican congresswoman who has supported the Jan. 6 insurrectionists.
GEORGIA STATE・24 DAYS AGO
buzzfeednews.com

A judge on Wednesday temporarily blocked the Biden administration from winding down a Trump-era policy that quickly expels immigrants at the border and blocks them from accessing the US asylum system. The temporary restraining order, which stops the administration from implementing a gradual ending of the policy known as Title...
CONGRESS & COURTS・19 DAYS AGO
WashingtonExaminer

'We caught them': Trump hypes 'explosive' 2020 election litigation in Michigan

Joe Manchin endorses a REPUBLICAN: West Virginia Democrat slams Trump-backed lawmaker in his own state and backs his opponent as he intervenes in GOP primary battle with TV ad bashing Biden's Build Back Better plan

Democrat Senator Joe Manchin is crossing the aisle to weigh in on a fierce GOP primary race in his home state of West Virginia. The centrist Democrat appeared in a Friday campaign ad attacking Donald Trump-backed House Rep. Alex Mooney, instead appearing to endorse his challenger, Rep. David McKinley. He...
PRESIDENTIAL ELECTION・15 DAYS AGO
Business Insider

Mitt Romney asked Utah's governor during the Capitol riot to get state police to evacuate his family from his Salt Lake City home, book says

The Utah senator called Gov. Spencer Cox on January 6, 2021 to ask him to dispatch the state police to his home outside Salt Lake City.
UTAH STATE・17 DAYS AGO
Business Insider

McConnell said days ago that a nationwide abortion ban is "possible," prompting an outcry from Democrats and abortion rights supporters.
CONGRESS & COURTS・6 DAYS AGO