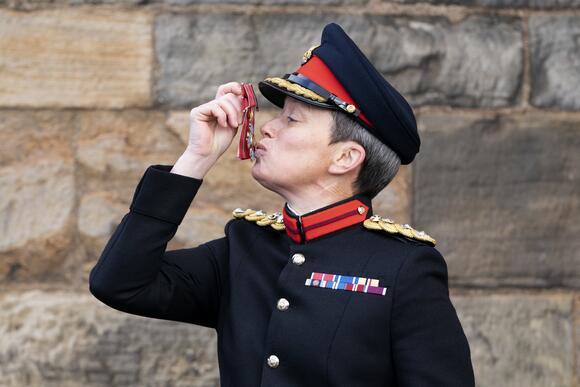 High-profile names in Scottish sport, business, charity campaigns and military veterans have received honours from the Princess Royal at the Palace of Holyroodhouse

The 115 people honoured were recognised over the last two years but until now they were not able to receive their awards in person because of the pandemic.

Top golfer Catriona Matthew who grew up in North Berwick and who plays mainly on the US-based Ladies Pro Golf Association circuit, was one of the recipients at the ceremony in Edinburgh on Wednesday.

An “absolutely delighted” Matthew said her OBE brought back memories of her win at the Solheim Cup – a biennial golf tournament for professional women – in Gleneagles in 2019.

She told the PA news agency: “There are so many other people getting other awards for all different fields, so for golf to be in there and recognised among that felt very special.” Rose Reilly, a former professional footballer from East Ayrshire who played for Scotland and Italy, was made an MBE for her services to the women’s game.

She said following the ceremony: “It’s so emotional. I am so proud of myself, women’s football and I am proud for my wee village of Stewarton.”

The 67-year-old attracted the interest of scouts at Celtic when she started playing as a child, and was allowed to take part provided she cut her hair short and called herself Ross.

She then went on to play for Reims as a teenager, and later joined ACF Milan, and was a member of the victorious Italian national side which won the Mundialito, the precursor to the women’s World Cup, in 1984.

“This recognition is good for the future players, the wee girls, that they can see that they can achieve something as a woman footballer in Scotland,” she added.

“I can sit back on my laurels now.”

When asked about how her conversation with Princess Anne went, she replied: “I said ‘Your Royal Highness, it’s a pleasure to get my MBE off a fellow sportswoman’. “She said, ‘I was interested, Rose, how come you played for Italy?’ And I said because I was banned from playing for Scotland, Scotland didn’t want me, but the Italians did, and she said ‘how amazing’.”

Elsewhere, Brigadier Clare Phillips, colonel of career management operations at the Army’s Personnel Centre and co-chairwoman of the Army LGBT+ Network, was made a CBE.

She added: “I’ve been practising my curtsy, which is not something that I have regularly had to do in the past.

“The Princess Royal was incredibly kind and she remembered that I am part of the REME, and that we recently rehomed the Corps to what was RAF Lyneham and which is now MoD Lyneham.

“I was able to remind her that her father, his Royal Highness Prince Philip opened the barracks just about five years ago, and it’s a superb new home for us, which was part of the reason that I’m privileged to have been given this award.”

Brig Phillips, who joined the Army in 1995, a time when she could have been discharged for being gay, was accompanied by her wife Nicky, who has served in the police for 28 years.

“Had I been able to bring more guests I would have brought my sister who’s currently loitering outside the gates of the palace,” Brig Phillips said. “But also my mum and dad.

“I am absolutely certain that I could not have done any of the things that I have done without Nicky’s support and the support of my family.”

Olivia Strong, founder of Run For Heroes, a campaign which raised millions for the NHS during lockdown, said collecting her MBE “didn’t feel real”.

She told PA: “It’s lovely to be recognised for the fundraising done during Covid.

“I got an email through and I genuinely thought it was my friends winding me up, and then I realised it was real.”

Ms Strong came up with the idea of encouraging people to run 5k and donate £5 to the NHS during lockdown while out running at Arthur’s Seat in Edinburgh.

The campaign took off and raised about £10 million for NHS Charities Together. Ms Strong said “the MBE is for everyone” who helped with and took part in the campaign.

Craig Thomson, who was a referee for 30 years in Europe and domestically, was made an MBE for services to football and charity in Scotland.

He said: “Surprised, was my first reaction, then I was delighted for recognition for the hard work.”

Mr Thomson said he would not have received the award without his family “making sacrifices”.

He added: “A day like today to come to a palace like this and get an award, it’s recognition both for myself but also for the hard work my family has put in behind the scenes.”

Covid-19 infections are continuing to fall in most parts of the UK but have risen slightly in Scotland, figures show.A total of 1.1 million people in private households across the UK are estimated to have had the virus in the week to 21 May, according to the Office for National Statistics (ONS).This is down from 1.3 million the previous week and is the lowest estimate for the whole country since the end of November 2021, when virus levels were just starting to rise due to the spread of the original Omicron variant.Total infections have now fallen by 78 per cent...
PUBLIC HEALTH・3 HOURS AGO
The Independent

England’s Matt Wallace credited the power of positive thinking as he moved into contention for a first victory since 2018 in the Dutch Open.A second round of 67 at Bernardus Golf gave Wallace a halfway total of eight under par and left him two shots behind Portugal’s Ricardo Gouveia, whose 66 late in the day saw him take a one-shot lead over China’s Li Haotong.Wallace came into the week having missed the cut in eight of his last nine starts and without a win since making an impressive – if ultimately unsuccessful – case for a Ryder Cup wild card...
GOLF・2 HOURS AGO
The Independent

Brendon McCullum wants to rid England’s Test team of its “fear of failure” as he prepares to launch a new era at Lord’s next week.McCullum made his first appearance as head coach at the home of cricket on Friday, having made a circuitous journey from the Indian Premier League via his home in New Zealand, and laid out his plans for England’s fresh start.He inherits a side on a desperate run of one win in 17 matches and rock bottom of the World Test Championship table, with just three days of work before they head back into action against his...
SPORTS・2 HOURS AGO
The Independent

A father who was paralysed in the Manchester Arena attack has said climbing Mount Kilimanjaro is just the start of his plan to “move mountains” for disabled people.Martin Hibbert, 45, will fly to Tanzania next week and embark on the seven-day trek in a specially adapted wheelchair in the hope of raising £1 million for the Spinal Injuries Association (SIA).He said: “This is actually going to be the easiest part of it, even though we’re climbing Kilimanjaro.“The actual work starts when we get back in terms of the bigger message about wanting to change the landscape for disabled people, especially...
SPORTS・4 HOURS AGO

French police have stepped in after Liverpool fans descended on landmarks across Paris ahead of the Champions League final.The Reds will take on 13-time winners Real Madrid at the Stade de France, just north of the city, on Saturday, with supporters beginning to arrive on Thursday morning.Local police were seen shutting down the Kop Bar, a Liverpool-themed pub in the city, after hundreds of football fans gathered there on Friday afternoon.At one point officers with riot gear were seen monitoring the situation after fans spilled on to the road.Some of those who travelled to Paris wrote on social media they...
PREMIER LEAGUE・2 HOURS AGO
The Independent

Sports stars and clubs across the world continue to provide an insight into their lives on social media.Here, the PA news agency looks at some of the best examples from May 27.FootballHarry Kane made an appearance on The Tonight Show.“We’ve been building nicely to this World Cup, and I’m really looking forward to it.”-Harry Kane (@HKane) on this year’s #WorldCup and beating England’s goal record. #FallonTonight pic.twitter.com/MrJSyr89S9— The Tonight Show (@FallonTonight) May 27, 2022Thanks for having me on @jimmyfallon. Great to chat all things football and pick up a table football victory 😁📸 @toddowyoung 📺 @FallonTonight pic.twitter.com/389iezvudC— Harry Kane (@HKane)...
SOCCER・3 HOURS AGO
The Independent

Nottingham Forest boss Steve Cooper wants his side to “stand on the shoulders” of past heroes and fire the club back to the Premier League.Forest can end a 23-year exile from the English top tier if they beat Huddersfield in the Championship play-off final on Sunday.The City Ground club have a rich history, with two European Cups and domestic success under Brian Clough, but the last 35 years have been a famine.Cooper has taken Forest closer to getting back to the big time than any one else since their 1999 relegation and he wants his players to embrace the past...
PREMIER LEAGUE・4 HOURS AGO