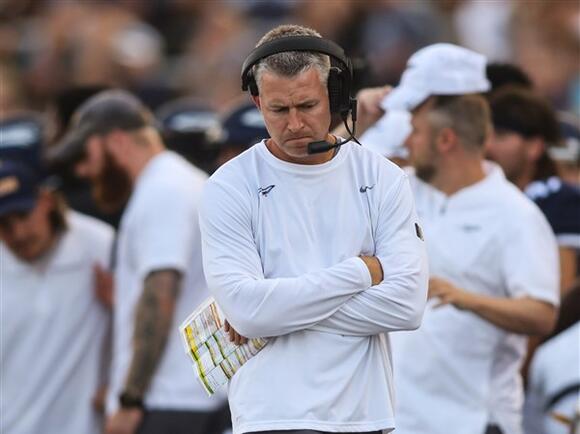 Jason Candle is staying at Toledo, turning down an offer to become Miami’s offensive coordinator.

Candle was first connected to the Miami job on Monday when FootballScoop reported that he was Miami head coach Mario Cristobal’s No. 1 target to be the Hurricanes’ offensive coordinator.

“It shows the confidence that he has in his team,” Toledo athletic director Mike O’Brien said. “The university brand and Rocket athletics is really strong, not just in northwest Ohio but nationally. And Jason wanted to continue to be a part of that. He has a great deal of faith in his ability, and his team’s ability, and his staff's ability to have a really good season.”

Sources told The Blade that Candle was offered a three-year deal that would have paid him in the range of $1.5-1.8 million per season. He is currently the highest-paid coach in the MAC. In 2021, Candle made $1.2 million.

Candle has been on the road all week recruiting for Toledo.

“At this date, let’s face it,” O’Brien said, “it could have affected recruiting, staffing, the current roster — a variety of things could have happened.”

Candle and Cristobal share an agent, and Candle spent a week in Oregon a couple of years ago observing Cristobal, gleaning information about offense and how to best operate a program.

The decision to stay is a massive bet on himself and his team. Toledo returns most of its offensive playmakers in 2022 and a bulk of the MAC’s best defense. Five consecutive years of the conference’s top-ranked recruiting class and strategic work in the transfer portal has led to a surplus of talent for the Rockets.

And it’s a victory for Toledo, which battled back against one of college football’s most well-known programs.

Candle is entering the second-to-last year of his contract, and a new athletic director is expected to be hired in February. He sought an extension this week from university president Dr. Gregory Postel but was rebuffed. UT is 24-20 overall and 17-13 in the MAC since winning the 2017 championship.

At 36, Candle was the youngest head coach in the country when he was hired in 2015 after Matt Campbell left for Iowa State. Candle was lauded as one of the bright young offensive minds in the game, serving stints coaching tight ends, wide receivers, quarterbacks, and as offensive coordinator from 2009 to 2015.

The former Mount Union wide receiver began his coaching career at his alma mater, where he spent seven seasons as wide receivers coach (2003-06) and offensive coordinator (2007-08).

In 2016, Toledo ranked in the top 10 nationally in passing efficiency, third-down conversions, total offense, and passing offense. The Rockets set a school record with an average of 517.8 yards per game.

They led the MAC in total offense in 2017 and surpassed 50 points a school-record six times in 2018 with the conference’s No. 1 scoring offense.

Despite Toledo’s offense languishing during the first half of 2021, plagued by inconsistent quarterback play and a woeful offensive line, the Rockets ended the season ranked 26th in scoring offense and 37th in total offense last season.

Candle did not return phone messages left by The Blade.