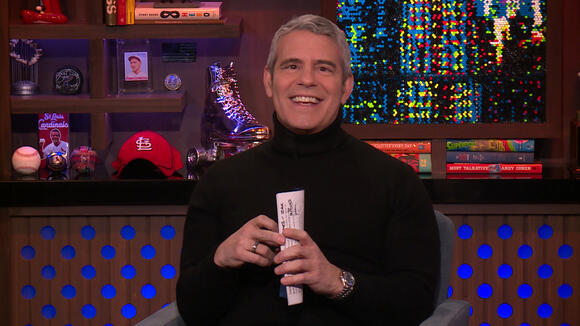 “What Watch Happens Live” has proven to be adaptable during the COVID-19 pandemic, with Cohen at first taping the show from his apartment with virtual guests . In fall 2020, Cohen returned to the studio — called “the clubhouse” — solo, but his guests remained virtual. In June of last year, Bravo announced that guests would once again appear from the clubhouse , along with a socially distanced, smaller audience. During the recent omicron surge — when Cohen himself got COVID for a second time — the show’s guests have been a mixture of remote and in-studio, and it has continued to be filmed in front of an audience. The talk show’s flexible format has been rewarded with ratings growth year-over-year in the key demographics of adults 18 to 49 and 25 to 54. According to Bravo’s announcement, 17 million total viewers tuned in to “What Watch Happens Live” last year.

“My WWHL team rose to every challenge of the pandemic, and getting to do WWHL for two more years is the ultimate reward. We’re still having a ball making our show — whether our guests are virtual or in studio!” said Cohen in a statement.

“Watch What Happens Live” functions as both a typical talk show and an aftershow for Bravolebrities to hash out an episode that aired that night. Guests in 2021 included a raft of “Real Housewives,” “Below Deck” cast members and other Bravo stars, as well as celebrities such as Mariah Carey, Sarah Paulson, Jessica Chastain and many more.

Click here to read the full article. Laura Dern and Sam Niell headlined Steven Spielberg’s 1993 blockbuster “Jurassic Park” as paleobotanist Ellie Sattler and paleontologist Alan Grant, respectively. The two characters fall in love during the film despite the 20-year age gap that existed between Dern and Niell during the making of the film. Dern was 23 years old when filming started and 26 when the movie opened in 1993. Niell, on the other hand, was 43 years old during the shoot. Neither actor was too concerned with their age gap and their characters’ romance. “I am 20 years older than...
CELEBRITIES・2 DAYS AGO
Variety

Click here to read the full article. BET+’s “Martin: The Reunion” has been given a premiere date: The special, which reunites the cast of the iconic 1990s Fox sitcom, will debut June 16 on the streamer. That’s one of several summer premiere dates BET+ is set to announce on Wednesday, Variety has learned exclusively. According to BET+, the 90-minute reunion brings back original stars Martin Lawrence, Tisha Campbell, Tichina Arnold and Carl Anthony Payne II to reminisce about the show’s five seasons. The show even takes place on the iconic “Martin” living room set and is hosted by Affion Crockett. “The cast...
TV & VIDEOS・20 HOURS AGO
Variety

Click here to read the full article. An entertainment industry expert testified Monday that Amber Heard lost $45 million to $50 million in endorsements and TV and film income over claims that she faked domestic violence allegations against ex-husband Johnny Depp. Heard’s team called the expert, Kathryn Arnold, as well as a psychiatrist and an orthopedic surgeon as the defamation trial began its sixth and final week. Heard’s lawyers were also expected to call Depp to the stand on Monday, but they ultimately decided they did not need his testimony. Depp previously testified over four days in April. Heard’s side is seeking...
CELEBRITIES・2 DAYS AGO
Insider

Netflix has canceled another one of its major shows, with this one getting the ax after only two seasons. Variety reports that hit sci-fi drama Raising Dion has been dropped by the streamer, following its recent season debut. The news seems to have been revealed by series star Sammi Haney, who shared the news with fans on Instagram. "Sad to say that Raising Dion is CANCELED [sic] Thank you for all of the amazing support we got from all of our wonderful fans!" Haney wrote, in part. "Season 2 was a success, equal to Season 1, even if just looking at how many people watched all of it and wanted a season 3!"
TV SERIES・29 DAYS AGO
bravotv.com

Porsha Williams and her fiancé, Simon Guobadia, have been busier than ever planning their upcoming nuptials, as The Real Housewives of Atlanta: Porsha's Family Matters couple previously opened up about "going big" on their special day. Now, Porsha is giving a glimpse at her bridal party ahead of her...
ATLANTA, GA・29 DAYS AGO
OK! Magazine

Ryan Seacrest is weighing in on the ongoing court battle between the Kardashian-Jenner family and Blac Chyna.According to a new report from Radar, the TV producer made some bombshell claims in his deposition, which the famous family is trying to get blocked from the jury. As reported by the outlet, Seacrest — who is scheduled to take the stand in the trial — shockingly revealed in his deposition that he wanted Chyna's show with Rob Kardashian, Rob & Chyna, to move forward, despite the Kardashian-Jenner squad's claim that there was fear over Rob's safety as a result of the exes'...
CELEBRITIES・29 DAYS AGO
Outsider.com

During last night’s finale, “American Idol” crowned Noah Thompson as the Season 20 winner, and fellow finalist HunterGirl couldn’t be prouder of him. The rising country star from Winchester, Tennesee, has impressed the judges and audience since her audition. She immediately became a frontrunner in the competition, and she held onto that title all the way until the end when it was just her and Thompson.
TV SHOWS・2 DAYS AGO

Paulina Gretzky walked down the aisle in Vera Wang!. The bride shimmered during her wedding with pro golfer Dustin Johnson on Saturday at Tennessee's Blackberry Farm. Gretzky showed off the stunning look on Instagram Monday in a photo of the newlyweds kissing. "4/23/22♥," she simply captioned the post. For...
BEAUTY & FASHION・29 DAYS AGO
Popculture

One of the stars of This Is Us is on the move to a new network in advance of the show's series finale. Deadline reported in March that Chris Sullivan, who plays Toby on the NBC series, will headline a comedy pilot for ABC. His new show is set to be titled The Son In Law.
TV SERIES・29 DAYS AGO
PopCrush

90 Day Fiancé: Before the 90 Days star Johnny Chao is showing off a new look on social media. The reality TV star rocked a fresh-faced look on the show. However, Chao debuted some new facial hair in his most recent post on Instagram. More specifically, he grew a beard and mustache.
TV & VIDEOS・29 DAYS AGO
Outsider.com

The funny things that kids say are sometimes the cutest. With Eli currently in a coma, we haven’t seen Days of Our Lives actor Lamon Archey in action in Salem for a while now but he recently showed off a new look that had his daughter not only asking him why he decided on the change but also giving her opinion on why he did it in the first place.
CELEBRITIES・29 DAYS AGO
The Associated Press

LOS ANGELES (AP) — Kim Kardashian testified Tuesday that she had no memory of making any attempt to kill the reality show that starred her brother Rob Kardashian and his then-fiancée Blac Chyna. But she acknowledged demanding that Chyna be kept off of “Keeping Up With the Kardashians” after hearing Chyna had abused her brother.
LOS ANGELES, CA・29 DAYS AGO
Variety

Click here to read the full article. The president of DC Films testified Tuesday that the studio considered replacing Amber Heard for “Aquaman 2” out of concern that she lacked chemistry with star Jason Momoa. Heard was ultimately cast in the sequel, but her lawyers have argued that she nearly lost the job and could not renegotiate for more money due to the backlash over her domestic abuse allegations against Johnny Depp. Heard is seeking $100 million in a defamation counterclaim against Depp. Walter Hamada, the head of Warner Bros.’ DC unit, was the first witness called by Depp’s side as they...
MOVIES・1 DAY AGO
hotnewhiphop.com

Kim Kardashian's ex-husband, Damon Thomas, continues to "wish her the best," despite any false narratives about their past relationship. The 51-year-old sat down with DJ Vlad, looking back at his marriage with now-billionaire businesswoman Kim Kardashian in the early 2000s. He believes he's played a "part in their journey," however, he doesn't want to be known as "Kim Kardashian's husband" and wants to "get in control of [his] narrative," as many people fail to recognize he has won Grammys and even made it to the Oscars.
RELATIONSHIPS・29 DAYS AGO
Variety

Click here to read the full article. “American Idol” crowned a new winner last night (May 22). Twenty-year old Louisa, Kentucky native Noah Thompson sealed the deal with a sultry performance of Bruce Springsteen’s “I’m on Fire” and his original song, “One Day Tonight.” He beat out fellow country artist, HunterGirl. After Thompson’s rendition of “I’m on Fire” — from Springsteen’s “Born in the USA” album — judge Katy Perry foreshadowed his victory. “So many people have fallen in love during that song, used it as their first-dance song,” she said. “I think you just swooped in and grabbed every heart in...
LOUISA, KY・2 DAYS AGO
Variety

Click here to read the full article. Sam Neill is returning to the “Jurassic Park” franchise as paleontologist Alan Grant in the upcoming “Jurassic World Dominion,” but there’s a huge difference between the new installment and Steven Spielberg’s 1993 original. Neill recently told The Sunday Times that “Dominion” is nearly wall-to-wall action, which stands in direct contrast with Spielberg’s slow burn. The 1993 original takes 45 minutes to build up to its Tyrannosaurus rex reveal. The 2022 sequel has a dinosaur action scene from the moment it  starts. “I have never seen action like this,” Neill said, noting Spielberg’s slow burn...
MOVIES・2 DAYS AGO
Variety

Click here to read the full article. Texas gubernatorial candidate Beto O’Rourke crashed Gov. Greg Abbott’s press conference on Wednesday where state officials were meeting to discuss the Tuesday shooting in Uvalde, Texas, where 19 students and two teachers were killed by a gunman. Videos showed O’Rourke approaching the stage where Abbott, Sen. Ted Cruz and more politicians were convening after Tuesday’s tragedy. O’Rourke, who will challenge Abbott in the Texas gubernatorial election, reportedly interrupted the proceedings after Abbott blamed the shooting on the country’s mental health crisis. “You are doing nothing,” O’Rourke said after he approached the stage. “You said this...
TEXAS STATE・18 HOURS AGO
Variety

Click here to read the full article. A Virginia judge on Tuesday denied Johnny Depp’s motion to dismiss Amber Heard’s counterclaim, ruling that the issue should be decided by the jury. The counterclaim alleges that Depp’s attorney, Adam Waldman, defamed Heard and damaged her career when he accused her and her friends of perpetrating an “abuse hoax.” Heard’s side rested their case Tuesday morning, prompting Depp’s team to make the routine motion to dismiss the claim. Depp’s attorney, Ben Chew, argued that Waldman was offering his opinion, and that therefore he cannot have committed defamation. Chew also argued that there is no...
CELEBRITIES・1 DAY AGO