Apple (NASDAQ: AAPL) stepped on the gas in India in 2021 as growing demand for 5G smartphones there helped the tech giant attract more users into its fold.

According to CEO Tim Cook, Apple's business doubled in India in fiscal 2021 (ended Sept. 25, 2021) which was well ahead of what analysts were expecting . While Cook didn't spell out Apple's exact revenue from India, calculations indicate that the company generated close to $4 billion in revenue there. That may not be a big deal considering Apple's fiscal 2021 revenue of $365.8 billion, but investors shouldn't miss the fact that the company still has a lot of room for growth in India given the booming demand for 5G smartphones in the country.

Let's look at the reasons why 2022 could be another blockbuster year for Apple in India. 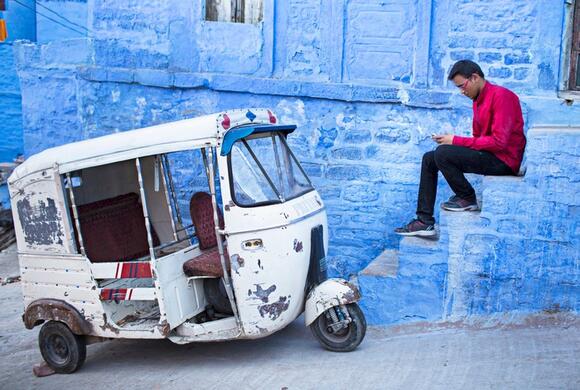 Indians are going to buy more 5G smartphones this year

The Indian smartphone market is expected to clock shipments of 190 million to 200 million units this year, according to various market research firms. For comparison, an estimated 167 million to 168 million smartphones were shipped in India last year, which means that the market could grow between 13% and 20% in 2022.

It is worth noting that 5G smartphone shipments in India this year are expected to outpace the overall market's growth. CyberMedia Research estimates that 5G smartphone shipments in India could more than double in 2022 to 64 million units from last year's estimate of 28 million units. This isn't surprising, as 5G wireless networks are expected to be rolled out in several major Indian cities this year.

5G smartphones command a higher average selling price (ASP) in India. According to IDC, the ASP of a 5G smartphone in India stood at $401 in the third quarter of 2021, which was way higher than the overall smartphone ASP of $196 in the country. What's more, Indians are spending more money on smartphones, which is evident from a 24% drop in sales of sub-$200 devices and a 56% increase in sales of $200-plus smartphones.

Counterpoint Research estimates that smartphone ASP in India could rise 13% in 2022 as people transition toward higher-priced phones. So one can assume that the average price of a 5G phone in India could exceed $450 this year. The higher ASP means that more consumers are likely to purchase iPhones in India given the premium pricing of Apple's devices in the country, driving strong growth in the company's sales over there in 2022.

More importantly, Apple is leaving no stone unturned to attract more users in India and maintain its hegemony in the premium smartphone market.

Apple is making smart moves to boost sales in India

Apple is the dominant player in the $400-plus (30,000 Indian rupees) premium smartphone segment in India, accounting for a 44% share of that space as per Counterpoint Research. As 5G smartphone ASPs fall right in the space that Apple dominates in India, it wouldn't be surprising to see sales of iPhones take off once again this year.

Another factor that could help Apple boost sales in India is the fact that the company has gone aggressive with its pricing strategy. The company substantially slashed the price of its 5G offerings in the Indian market right at the beginning of the year.

For instance, the 5G-enabled iPhone 12 mini can be purchased for 40,990 rupees (roughly $555 at the current exchange rate) on e-commerce stores in India. Apple's online store in India, meanwhile, is offering customers the option to purchase the iPhone 12 in interest-free installments, while also offering trade-in discounts in the range of 9,000 rupees ($121) to 46,000 rupees ($622) depending on the device being exchanged.

These trade-ins and offers could encourage more consumers to buy iPhones in India to take advantage of the 5G networks. Meanwhile, Apple is reportedly going to launch a 5G-enabled version of the iPhone SE in the current quarter. The device is rumored to carry a price tag of around $400, which would make it the cheapest 5G-enabled iPhone. Such an aggressive price point would further lower the entry barrier for Indian customers looking to make the jump to 5G and give Apple's sales a big boost in that market.

As such, Apple seems on its way to dominating the fast-growing 5G smartphone market in India in 2022, and this should also set the company up for long-term growth over there. That's because 5G smartphone sales in India are expected to hit 144 million units in 2025, and Apple is making the right moves to ensure that it remains in a solid position to tap into this terrific opportunity.

They just revealed what they believe are the ten best stocks for investors to buy right now... and Apple wasn't one of them! That's right -- they think these 10 stocks are even better buys.

A "moonshot" stock in a bearish market.
MARKETS・1 DAY AGO
The Motley Fool

Is Microsoft a Buy After Its Latest Earnings Report?

The tech giant smashed Wall Street expectations, and although it beat them across the board, its Azure cloud division was the big winner.
STOCKS・7 HOURS AGO
The Motley Fool

These underperforming tech giants can be long-term winners.
STOCKS・8 HOURS AGO

Tesla CEO Elon Musk said this week that the U.S. must "stop the infighting" in order to be competitive with China, warning that the world's second-largest economy will someday dwarf America's output. "What we’re going to see with China, for the first time that anyone can remember who is alive,...
ECONOMY・1 DAY AGO
ohmymag.co.uk

Blackout and crisis preparedness expert Herbert Saurugg has recently warned against the complete power grid blackout that could plunge entire Europe into darkness. He predicts a widespread blackout could be lurking in the not too distant future and such an event can cause extremely chaotic conditions worldwide. However, those who are prepared for an emergency can definitely bridge the difficult days well.
ENERGY INDUSTRY・24 DAYS AGO
Inc.com

Indonesia accounts for about half of the world's supply of palm oil — the world's most widely used vegetable oil.
INDUSTRY・24 DAYS AGO
The Motley Fool

Unsurprisingly, both are stablecoins.
STOCKS・2 DAYS AGO
inputmag.com

One of the most promising cryptocurrencies has cratered.
STOCKS・2 DAYS AGO
The Motley Fool

Is The Trade Desk a Buy Now?

The advertising technology company still has a bright future.
STOCKS・8 HOURS AGO
The Motley Fool

This Semiconductor Stock Could Go Parabolic

Solid results and healthy guidance could send this stock soaring.
STOCKS・1 DAY AGO
The Motley Fool

1 Nasdaq Stock Down 75% That Could Crush the Market

A bright future and a massive opportunity seem to await this tech company.
STOCKS・8 HOURS AGO