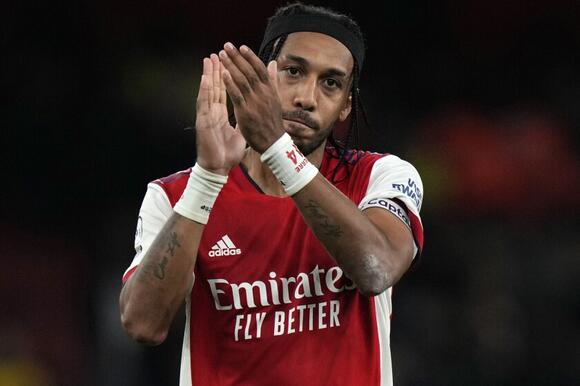 Pierre-Emerick Aubameyang has returned to London and is undergoing medical tests as Arsenal looks for “clarity” after he was diagnosed with heart lesions during his recovery from the coronavirus at the African Cup of Nations, manager Mikel Arteta said Wednesday.

Aubameyang was released by Gabon's national team after being diagnosed with “cardiac lesions” in tests conducted by Confederation of African Football medical officials, who were checking on his condition after he tested positive for COVID-19.

“We haven’t had any clarity from the Gabon national team about the reasons why he came back," Arteta said. “It’s our obligation to make sure, medically, the player is safe, in a good condition and there are not any issues related to that. Because historically everything we have done with the player, he has never had that issue.”

While the African federation announced Aubameyang and teammate Mario Lemina had heart lesions, Gabon coach Patrice Neveu said neither player had serious heart problems but rather they were suffering from some aftereffects of COVID.

They tested positive for the virus at an airport in Cameroon on their arrival for the African Cup, forcing them to miss Gabon’s first game while in isolation. They also missed the team's second game after CAF’s medical commission advised that they shouldn’t play following the tests.

Aubameyang was stripped of the Arsenal captaincy last month for disciplinary reasons. He was also left out of some matches before being allowed to join up early with Gabon's squad ahead of the African Cup.

BARCELONA, May 20 (Reuters) - Two times world champion Fernando Alonso risked being sanctioned by Formula One's governing body at his home Spanish Grand Prix on Friday after accusing stewards of incompetent and unprofessional behaviour. The Alpine driver collected two five second penalties during the previous race in Miami, the...
MOTORSPORTS・26 MINUTES AGO
The Guardian

It is the first morning of Lancashire’s County Championship game against Essex. Outside the Old Trafford pavilion, England’s highest wicket-taker is handing over a county cap. “I know you expected a bit more grass,” he says. “But sorry, maybe next time.”. Hassan Ali’s Manchester spring...
SPORTS・23 MINUTES AGO