Dwayne 'The Rock' Johnson confirmed that he's not the secretive buyer of a $31.8 million T. rex after social-media rumors 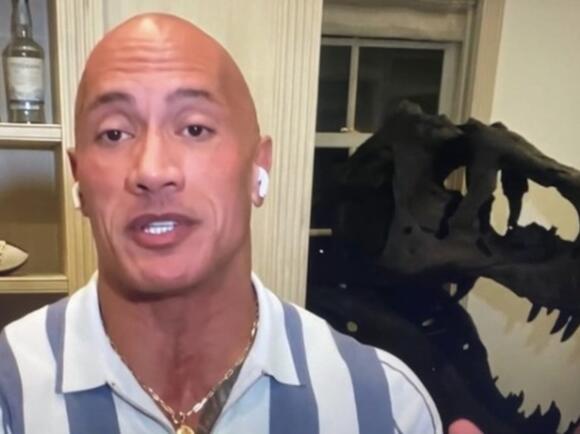 Dwayne 'The Rock' Johnson debunked rumors he was the mysterious and controversial buyer who spent $31.8 million buying one of the best-preserved T. rex skeletons ever discovered , saying he just owns a replica.

Speculation began on Monday that Johnson may have been the person who bought the T. rex at auction in October 2020, following his appearance on Monday Night Football's "Manningcast" segment.

Johnson appeared on the show, hosted by legendary NFL brothers Peyton and Eli Manning, to discuss a Wild Card playoff game between the Los Angeles Rams and the Arizona Cardinals.

However, he drew most attention for the life-sized T. rex skull behind him in his office, which he called Stan.

"Wait, what is that? You've got a T. rex behind you? What is that?!" Eli asked the former WWE star as they watched the game.

"I got a T. rex skull, yeah," Johnson replied, laughing. "That's Stan. As a matter of fact, Stan is the most complete T. rex skull ever found by a young paleontologist, and his name was Stan, so this T. rex head was named after him."

Soon afterwards a picture of Johnson and his T. rex skull was shared by podcast host Pat McAfee , at which point social media users made the connection between Johnson's possession and the real Stan.

Taking to Instagram Tuesday night, however, Johnson confirmed that he simply owns a replica of Stan's skull, and wasn't the mystery 2020 buyer.

"After my LIVE interview on last night's ManningCast on NFL's Monday Night Football, there's been tons of worldwide speculation in the world of science ~ that I am the 'mystery buyer' of the original T-REX skull, known as STAN," Johnson wrote alongside a picture of the cast.

"I am not the mystery buyer."

"In my home office, this is my REPLICA CAST of STAN that I had made and purchased from my friends at The Black Hills Institute of Geological Research and Paleontological Excavations."

He went on to say that while he doesn't own Stan, he does have something in common with him.

"STAN's a fucking bad ass," he wrote. "And reminds me of myself."

He also added that if he did own the real Stan, he'd be kept in a museum, not in a study.

The sale of Stan caused controversy in the scientific community. Paleontologists were angered by the inflated price the buyer paid, and worried the sale could encourage people to seek profit over scientific discovery in the future.

"This is terrible for science and is a great boost and incentive for commercial outfits to exploit the dinosaur fossils of the American West," an expert told National Geographic .

Robin Roberts got emotional as she opened up about her relationship with partner Amber Laign, especially in the midst of a challenging health battle. The Good Morning America star made an appearance on The Ellen DeGeneres Show to promote her new book, Brighter By the Day. VIDEO: Robin Roberts enjoys...
CELEBRITIES・21 DAYS AGO
Insider

According to Tina Brown's new book, "The Palace Papers," Prince William was aware of his status as future king from a young age.
CELEBRITIES・20 DAYS AGO
SheKnows

Click here to read the full article. It seems like everyone was rooting for Renée Zellweger and Ant Anstead to get together, including an unexpected duo: the Property Brothers. Drew and Jonathan Scott recently revealed that they were the ones that ended up getting Zellweger and Anstead to meet, and subsequently fall in love. And their hard work ended up paying off! Back on April 14, 2022, the Scott brothers sat down with ExtraTV to talk about everything from Drew’s upcoming fatherhood to Jonathan loving GF Zooey Deschanel’s Vanity Fair gown. While we loved the entire interview, we’re losing it over...
CELEBRITIES・22 DAYS AGO
Hello Magazine

Princess Eugenie has taken to her Instagram Stories to make an exciting announcement related to The Anti-Slavery Collective, which she co-founded with her best friend Julia de Boinville back in 2017. Resharing a message from the charity organisation, the mother-of-one revealed she was posting "news from my charity". WATCH: Princess...
CELEBRITIES・20 DAYS AGO

Netflix has canceled another one of its major shows, with this one getting the ax after only two seasons. Variety reports that hit sci-fi drama Raising Dion has been dropped by the streamer, following its recent season debut. The news seems to have been revealed by series star Sammi Haney, who shared the news with fans on Instagram. "Sad to say that Raising Dion is CANCELED [sic] Thank you for all of the amazing support we got from all of our wonderful fans!" Haney wrote, in part. "Season 2 was a success, equal to Season 1, even if just looking at how many people watched all of it and wanted a season 3!"
TV SERIES・20 DAYS AGO
OK! Magazine

Prince William and Prince Harry's relationship has been strained ever since the bombshell Oprah Winfrey tell-all which was later followed by Harry and his wife, Meghan Markle, abandoning their royal duties and moving to the United States. Now, royal author Robert Jobson is further opening up about what he's learned about The Duke Of Cambridge over the years. According to his sources, William is still very disappointed about the sit-down, and at one point, wasn't sure what the future would hold for their brotherly bond. "To say William felt deeply let down would be an understatement," a source claimed per...
CELEBRITIES・22 DAYS AGO
PopCrush

Last month it was revealed that Sharon Osbourne would be returning to television, partnered with Piers Morgan on a new U.K. series named The Talk. This comes nearly a year after Osbourne was suspended and eventually exited the U.S. talk show The Talk after expressing her support for Morgan in an intense discussion over race with co-host Sheryl Underwood. Now, in a new interview with the U.K.'s Sunday Times, Osbourne reveals how cancel culture impacted her as she eventually parted ways with her longtime daytime talk series amidst public backlash.
CELEBRITIES・21 DAYS AGO

Megan Fox wants her kids to express themselves however they please. In a wide-ranging interview with Glamour U.K. for their April cover story, the 35-year-old actress opens up about how she teaches her children, Journey River, 5, Bodhi Ransom, 8, and Noah Shannon, 9, about gender identity and encourages them to be confident in who they are.
FAMILY RELATIONSHIPS・20 DAYS AGO
People

Paulina Gretzky walked down the aisle in Vera Wang!. The bride shimmered during her wedding with pro golfer Dustin Johnson on Saturday at Tennessee's Blackberry Farm. Gretzky showed off the stunning look on Instagram Monday in a photo of the newlyweds kissing. "4/23/22♥," she simply captioned the post. For...
BEAUTY & FASHION・20 DAYS AGO
Entrepreneur

Dorsey, who was CEO of the company until November 2021, took to the platform to pen his thoughts on the new changes.
BUSINESS・20 DAYS AGO
hotnewhiphop.com

50 Cent cast doubt on Megan Thee Stallion's recent comments about not having been in an “intimate relationship” with Tory Lanez, prior to the infamous shooting in July 2020 which left her with gunshot wounds. Megan's comment came during a recent interview with Gayle King, during which she...
CELEBRITIES・20 DAYS AGO
The Independent

Mark Hamill has revealed he lost thousands of followers on Twitter in the space of a few hours yesterday (25 April).While the exact reason for the exodus has not been confirmed, his tweet came shortly after it was announced that Elon Musk is set to purchase the social media platform in a deal worth $44bn.Since the news broke, many users of the site (including Jameela Jamil) have announced their intention to delete their accounts, owing to Musk’s reputation as a politically controversial figure. It is believed this could be the reason for Hamill’s loss in followers.“Weird. I just lost...
CELEBRITIES・21 DAYS AGO
Complex

Benzino is once again airing out some family business. After previously calling 50 Cent the “first hip-hop rat,” and getting into various other conflicts with his daughter Coi Leray, the rapper has now name-dropped both of them in a Twitter tirade. On Sunday, Fif took to Instagram to...
CELEBRITIES・21 DAYS AGO
Outsider.com

90 Day Fiancé: Before the 90 Days star Johnny Chao is showing off a new look on social media. The reality TV star rocked a fresh-faced look on the show. However, Chao debuted some new facial hair in his most recent post on Instagram. More specifically, he grew a beard and mustache.
TV & VIDEOS・20 DAYS AGO
Daily Mail

Katy Perry reacted quite hilariously to a Top 11 contestant on American Idol during a unique song challenge on Monday night's episode. Each of the remaining contestants were given a song to perform by each judge - Perry, Lionel Richie and Luke Bryan - with the singer selecting one and then tasked with guessing which judge picked that song for him or her.
MUSIC・21 DAYS AGO
Insider

"The sisters are clearly concerned for our brother's safety and the credibility of the brand," Khloe Kardashian wrote in a 2016 email.
LOS ANGELES, CA・21 DAYS AGO
Popculture

Spring is always a big time for engagements and weddings, and two beloved internet personalities are the latest to update their relationship status. On April 18, Rachel "Seltzer" Quirico revealed she and longtime boyfriend Trevor "TorcH" Housten were tying the knot after 17 years together. Both of them are beloved figures in the esports world, with Seltzer notably starring in the Syfy reality show WCG Ultimate Gamer. She's also hosted numerous esports tournaments and events for TV/streaming outlets; she also made a recent appearance on G4 TV's Boosted.
RELATIONSHIP ADVICE・21 DAYS AGO