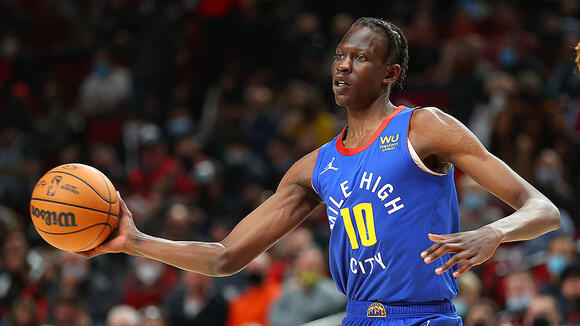 BOSTON (CBS) — The Celtics are taking a flyer on injured center Bol Bol while also getting closer to avoiding the luxury tax. The Celtics have reportedly reached a three-team deal with the San Antonio Spurs and Denver Nuggets that will bring Bol and PJ Dozier to Boston.

In the deal, which was first reported by ESPN’s Adrian Wojnarowski late Tuesday night, Boston is sending Juancho Hernangomez to San Antonio while Denver is receiving Bryn Forbes from the Spurs. Hernangomez was barely playing for the Celtics, so the move is mostly to shed his nearly $7 million salary to help Boston get closer to the tax threshold. The trade will save the Celtics $4.3 million on the books.

Bol, who is 7-foot-2 with a 7-foot-8 wingspan, is scheduled to have surgery on his injured foot and will be out for the next two-to-three months. He had been traded by Denver to Detroit recently, but that trade was voided after Bol failed his physical with the Pistons. He could potentially start playing for the Celtics near the end of the regular season, but that is no guarantee.

The 22-year-old Bol will be a restricted free agent in the offseason. The Celtics will hold his Bird Rights if he remains on the roster the rest of the year, and the team could tender him a qualifying offer this summer. Brad Stevens and company will now have a few months to watch him rehab and determine if they want him to be part of the mix in the future. There is certainly some intrigue for a big man who can handle the ball wall and has some range.

Dozier, 25, is out indefinitely after tearing his ACL in late November. The combo guard previously played for Boston on a two-way contract during the 2018-19 season.

Wojnaroswki is reporting that the Celtics don’t have any immediate plans to waive either player. Both could become part of future deals to match salary, but cannot be traded together ahead of the deadline.

While the moves won’t really help the current Celtics team, which is sitting at 23-22 and in 10th place in the Eastern Conference, it does save Boston some salary by way of shedding Hernangomez’s contract from the books.

The Golden State Warriors finished off the Memphis Grizzlies in Game 6 of their NBA Playoff series on Friday. Good thing because had they gone to Game 7, Stephen Curry might not have had time to study and graduate college. The Warriors star received his degree from Davidson College on...
SAN FRANCISCO, CA・23 HOURS AGO
CBS Boston

BOSTON (CBS) — The Celtics are moving on to the Eastern Conference Finals. Boston pummeled the Milwaukee Bucks in a deciding Game 7 at TD Garden on Sunday, 109-81, to finish off a classic second-round matchup between the two teams. Game 4 of the series belonged to Al Horford, while Jayson Tatum had his career game for Boston in Game 6. Tatum was still a star in Game 7, but Sunday belonged to Grant Williams. Williams had the game of his life, setting a new career-high with 27 points. The Bucks dared him to shoot and he did, hitting seven of his...
BOSTON, MA・20 HOURS AGO
CBS Boston

Hurricanes eliminate Bruins in first round, beating Boston 3-2 in Game 7

RALEIGH, N.C. (CBS) — The Bruins played well at home throughout their first-round playoff series against the Carolina Hurricanes, but they could never find an answer in Raleigh. And now, their season has come to an end. The Hurricanes defeated Boston 3-2 in Game 7 of their first-round matchup Saturday at PNC Arena. The B’s, despite winning all three of their games at TD Garden during the best-of-seven series, fall in the first round of the Stanley Cup playoffs for the first time since 2017. The Canes took the early lead with under 1:30 left in the first period. Teuvo Teravainen scored...
BOSTON, MA・1 DAY AGO

Robert Williams out again for Celtics in Game 6 vs. Bucks

BOSTON (CBS) — Celtics big man Robert Williams was once again listed as questionable for Boston’s must-win Game 6 in Milwaukee on Friday night. And Robert Williams was once again ruled out just prior to game time. Celtics head coach Ime Udoka made the announcement during his pre-game press conference in Milwaukee. “[He’s] disappointed as we all are, but looking out for health first and foremost,” said Udoka. “The pain is still there and we’re not going to put him out there until he’s 100 percent.” He added that the pain has been limiting Williams’ movement in practice, so the Celtics aren’t taking...
BOSTON, MA・2 DAYS AGO
CBS Boston

BOSTON (CBS) — There was some restrained jubilation among Celtics fans Friday morning when it was announced that Scott Foster would be one of the officials for Boston’s must-win Game 6 against the Bucks. Foster is known to many as “The Extender” because of the frequency that teams trailing in a series tend to win when he’s on the court. However, just a few hours before tipoff, the NBA announced that Foster was no longer available for Friday night’s game due to a non-COVID related illness. Scott Foster (non-Covid related illness) is not available to officiate tonight’s game between the Boston Celtics...
BOSTON, MA・2 DAYS AGO