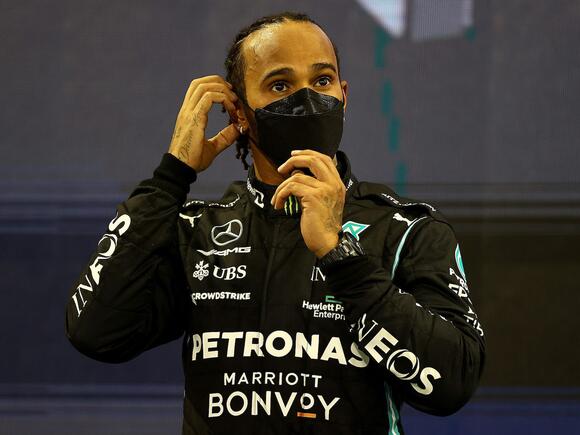 Lewis Hamilton's days as a Formula One driver could be over.

That's according to Zak Brown, the chief executive of Hamilton's former team Mclaren, who says he believes the seven-time world champion remains angry about the controversial end to last season.

Hamilton was denied a record eighth driver's championship at the final race of the season in Abu Dhabi by Max Verstappen in highly contentious circumstances.

With Hamilton in the lead and Verstappen in second on the penultimate lap, the race looked set to finish under a safety car with five lapped cars between the two racers.

However, the FIA race director, Michael Masi, then made the call to allow the five cars between the pair to overtake the safety car, setting up a final-lap shootout, which Verstappen won due to his fresher tires.

Masi's decision to only allow some lapped cars to unlap themselves was unusual as safety car rules suggest any such directions from the race director should be sent and apply to all competitors.

Hamilton said over the radio as the events transpired that he felt the race had been "manipulated" to allow Verstappen to win, while in the aftermath of the race, Mercedes team principal Toto Wolff hinted that Hamilton could retire.

Brown echoed Wolff's comments at a news conference on Tuesday.

"I wouldn't be shocked if he stopped, so no one should take for granted that he is coming back," he said when asked about Hamilton's future.

"We should not discount or not recognize his frustration, his anger. Maybe he has not made a decision and what he is doing is taking time to make that decision to make sure. Because once it's made, it's made, I don't think we should rule it out or make light of it."

He added, however, that he believes Hamilton still has a "burning desire to race" that will "ultimately drive his decision."

Hamilton has not commented publicly since the race amid on ongoing inquiry into the events by the FIA. His usually active Instagram and Twitter feeds have been silent since December 11, the day before the Abu Dhabi race, and he has not been publicly photographed at any point.

According to The Guardian, the FIA's new president, Mohammed Ben Sulayem, has already met with Wolff to discuss what happened in Abu Dhabi, while the Daily Mail reported that he held a meeting with F1 boss Stefano Domenicali at the company's headquarters on Tuesday.

Brown said he had "confidence" in Ben Sulayem to resolve the issue while he also dismissed any suggestions that the controversy was anything more than a misjudgment.

"They need to show they have taken action to make sure it doesn't happen again but I don't think this was a malicious decision," he said.

"For those who may have the view that the sport is corrupt, I don't agree. Potentially a different decision could have been made but I want to wait to see what the FIA comes out with."

Mercedes announced on Tuesday that it will unveil their 2022 car on Friday February 18 at a digital event from Silverstone.

The team said that key personnel including "drivers" would be in attendance, but did not specifically confirm that Hamilton would be present.

The Formula One 2022 season begins in Bahrain on March 20.

F1 is closer to adding an American driver, but George Russell warns against picking nationalities over talent

American star Colton Herta will test with McLaren this summer.
NFL・10 HOURS AGO