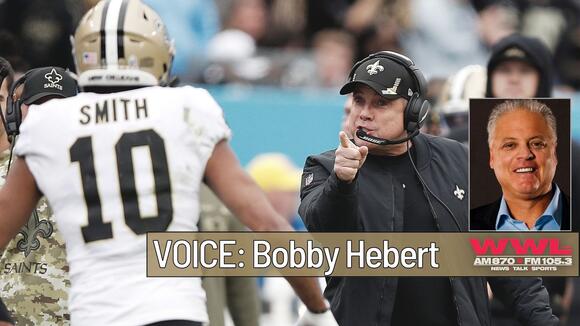 In what's become an offseason tradition, the NFL head coaching carousel has led to rampant musings and rumors about where Saints head coach Sean Payton could possibly find a greener pasture.

Could it be a short trip west to lead the Dallas Cowboys? How about a trek north to Chicago to lead the Bears? All options are on the table, at least as far as the rumor mill is concerned. But WWL Radio's Bobby Hebert isn't buying it.

“Look at Sean, two decades in one place? That’s unbelievable. But we're not there yet," Hebert said on SportsTalk with Mike Detillier and Kristian Garic. "We are not there. If this was 2024 or 2025 that might be a different animal."

Listen to more from SportsTalk in the player below. Can't see the embed? Click here.

There are a few reasons why a move for Payton would be unlikely after 15 seasons leading the Saints. The first is relative to something that's been a point of confusion. Some reports have surfaced suggesting Payton could move on, or even retire, based on the idea he's in the final season of his current contract. But that simply isn't true. The Saints coach renegotiated his deal in 2019, which keeps him under contract through the 2026 season.

While the finer details of that contract are unclear, a move wouldn't be as simple as jumping ship for another franchise. It'd likely have to come via a trade, which is a rarity but not unheard of. Former NFL head coach Jon Gruden was traded in 2002 from the then-Oakland Raiders to the Tampa Bay Bucs for two first-rounders and a second-round pick. Bill Belichick was technically traded from the New York Jets to the New England Patriots in 2000 for 1st-, 4th- and 7th-round draft selections.

So for another team to pry away Payton, the price could be steep.

"You’ve got to understand here," Detillier said, "he’s not a free agent.”

But there's one bigger reason, as Hebert explains: The "three-headed monster" of team owner Gayle Benson, GM Mickey Loomis and President Dennis Lauscha will be motivated to make sure the longtime head coach retires a Saints. If that group puts on the full-court press with the question, "what would it take to make you retire with the Saints organization," that'd be a tough act to follow for any potential suitor.

"They know Sean Payton is not only our immediate future, but maybe a handful of seasons. 2024, 2025, that’s a long time from now," Hebert said.
"But right now, I don’t think Sean Payton is going anywhere.”

Having grown up in Atlanta, rookie safety Smoke Monday wouldn’t go so far as to call himself a Saints fan, but he was a Drew Brees fan – hence the jersey he had on-hand after signing with New Orleans. See more on WWL and Audacy.
NEW ORLEANS, LA・2 HOURS AGO
WWL-AMFM

Jarvis Landry never landed the lucrative, long-term deal he was likely hoping for at the start of 2022 free agency. He ultimately chose New Orleans for a 1-year deal, and Jameis Winston was a big part of that sales pitch. See why on WWL and Audacy.
NEW ORLEANS, LA・1 DAY AGO