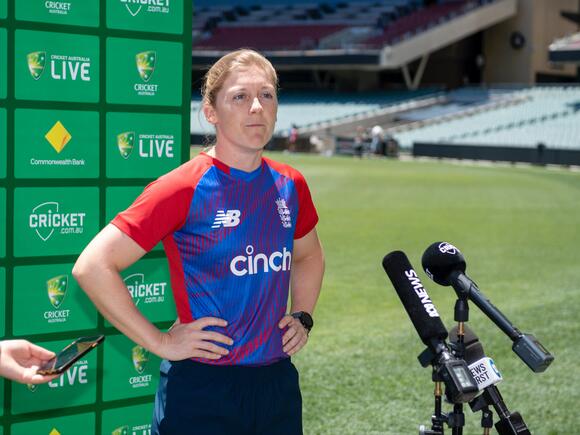 Heather Knight has urged England to be aggressive and “punch first” against Australia in the first Twenty20 of the Women’s Ashes on Thursday.

England go into the series as underdogs, with the hosts the dominant force in women’s cricket, ranked number one in the world as well as being T20 World Cup holders.

Meg Lanning’s side have not been beaten in any series since the 2013-14 Ashes, while Knight’s England managed just a single T20 victory when the sides last met in 2019, although the only Test match was drawn.

The multi-format series, which has been brought forward by a week, will start with three T20 games at the Adelaide Oval and Knight emphasised the importance of a strong start.

“I think it’s important to start any series well, it’s something we’ve addressed as a side. I think the last few years we’ve really looked to go hard at that first game,” the England captain said.

“It’s previously been a weakness of ours, so I think we’ve responded really well actually and we’ve been really successful in first games of the series recently. You’ve just got to find that intensity and find a way to get yourself in the game.

“There’s obviously going to be nerves around, that’s completely normal for a big game of a series like this, but we’re confident that we can cope with that and try and be really aggressive and punch first against Australia.”

T20 cricket is one of our strongest formats, so I think that will suit us quite nicely

England’s preparation time has been dented by the mandatory 10-day quarantine they will have to observe on arrival in New Zealand for their World Cup defence in March.

Their first training session in Canberra was washed out and their only scheduled 50-over intra-squad warm-up match reduced to just 35 overs, again because of rain, but Knight believes England can succeed in the shorter format.

“There has been that tricky build-up, but there’s not a lot we can do about it, there’s no point moaning about it and using it as an excuse,” Knight said.

“We feel in a really good place. T20 cricket is one of our strongest formats, so I think that will suit us quite nicely. We’re really clear about how we want to go about our T20 cricket and a lot of us have got experience playing T20 over here as well with the Big Bash and previous Ashes trips.

“So the confidence is high, we had a really good training session yesterday and hopefully another one later tonight in the evening and we’ll be all good to go tomorrow.”

Kickoff in the Champions League final between Liverpool and Real Madrid was delayed by at least 30 minutes on Saturday after security struggled to cope with the the vast crowd and supporters climbing over fences.There were sporadic instances of soccer fans, apparently without tickets, breaking through security and attempting to get into the stadium. The Associated Press saw two fans — one was wearing Liverpool attire — wrestled to the ground by stewards and bundled out of the gates.Another fan evaded stewards and was seen sprinting through the concourse and into the bottom level of the stadium.Supporter Colm Lacey...
UEFA・1 HOUR AGO
The Independent

Wigan head coach Matt Peet admitted his side’s Challenge Cup triumph “hasn’t sunk in” after winger Liam Marshall’s late try helped clinch a 16-14 win against Huddersfield.The victory secured a record-extending 20th Challenge Cup crown for Wigan and a major trophy in Peet’s first season at the helm.The Giants had looked on course to end their 69-year wait for a win in the competition when they led 14-12 until the 76th minute, only for Marshall to touch down and snatch glory for Wigan.🔥 WINNERS 🔥#WWRL #ChallengeCup pic.twitter.com/W39ABnPros— Wigan Warriors 🍒⚪️ (@WiganWarriorsRL) May 28, 2022“I know it’s good, I know it’s...
RUGBY・2 HOURS AGO
The Independent

Kye White was happy to claim third place at the BMX Racing World Cup event in Glasgow.The Olympic silver medallist took a break from training after Tokyo and competed in ITV show Dancing on Ice earlier this year.White said of the result: “I’m happy with it."The crowd pump you up, they give you energy. Hopefully I'll do something good for them tomorrow." 🗣️ @kyewhyte reacts to his second #BMXWorldCup medal 🥉 pic.twitter.com/YcwZUyj9CL— British Cycling (@BritishCycling) May 28, 2022“I’ve had a long rest after the Olympics, probably about two months of training and we’re into this race so the podium is good.“I did want to win in front of a home crowd but we’ve still got tomorrow.”Olympic champion Bethany Shriever was in strong form through the rounds but was unable to make up for a poor start in the final and finished eighth. Read More Russia’s invasion now making ‘palpable progress’, UK says - liveWhat Rishi Sunak announced to tackle the cost of living crisis
SPORTS・2 HOURS AGO
The Independent

A Liverpool fan was “devastated” when his flight to France for the Champions League final was cancelled, leaving him in “limbo” at an airport for six hours.Keenan Downey and his father Leslie arrived at Liverpool John Lennon Airport at 1.30am on Saturday, hoping to catch a 4am flight to Paris.However, they were among scores of fans who faced lengthy delays after a flight cancellation.Mr Downey, 25, who travelled from Anglesey, Wales, says the flight was rescheduled to depart at 5.45am but was cancelled.He was then told there was no flights left at 3.30am, leaving him “stood around helpless”, before he finally...
SPORTS・5 HOURS AGO

New England coach Brendon McCullum has reopened the door to Test cricket for Indian Premier League star Jos Buttler and is also eager to see if the likes of Liam Livingstone, Moeen Ali and Adil Rashid want to be part of his red-ball revamp.Buttler was dropped after a disappointing Ashes series, with Ben Foakes and Jonny Bairstow on duty for next week’s first Test against New Zealand, but has been in electric form with Rajasthan Royals at the IPL.He has powered the franchise into Sunday’s final on the back of four centuries in 16 games and averages 58.85 at a...
SPORTS・3 HOURS AGO
The Independent

Ronan O’Gara conjured up a coaching masterclass to inspire La Rochelle to a last-gasp 24-21 Heineken Champions Cup final victory over four-time champions Leinster at Stade Velodrome, Marseille.Massive underdogs coming into the final, La Rochelle snatched victory at the death when replacement scrum half Arthur Retiere squirmed his way over from a ruck on the Leinster line to put his side ahead with a mere 17 seconds left on the clock.Up stepped Ihaia West to add his third conversion of the game and the French side made up for their defeat in the final a year earlier and become only...
RUGBY・1 HOUR AGO
The Independent

England defender Demi Stokes understands her side hold a “great responsibility” to inspire the next generation during this summer’s Women’s Euro 2022.The Lionesses are among the favourites to lift the European Championship, which is being held on home soil, and winning the tournament could have a profound effect on the women’s game.Stokes, who has been named in Sarina Wiegman’s provisional squad, knows what is at stake if the team do well.“It is important now, with the Euros coming up, what a way to inspire girls, and if they are watching the Euros they have got something to aim for,” she...
SPORTS・3 HOURS AGO
The Independent

A group of Liverpool fans have travelled to France in a speedboat to watch their team battle Real Madrid in the Champions League final after their Easyjets flights were cancelled.As many Reds were hit by travel chaos amid a wave of Easyjet cancellations, a group of a dozen fans resorted to making their own way across the Channel from Jersey to Saint Malo on Friday. Footage showed the men approaching the French coast in blustery conditions, blasting Billy Joel’s “We Didn’t Start the Fire”, as one on the boat remarked: “We must be off our f****** heads.”Paddy O’Toole, who lives...
SPORTS・5 HOURS AGO

Emma Raducanu has been urged to “embrace” the spotlight she will be under at this year’s Wimbledon by fellow Brit Cameron Norrie.Raducanu is gearing up to return to the scene of where her meteoric rise began with her run to the fourth round last year.The 19-year-old went on to shock the sporting world by winning the US Open, and will return to SW19 as a grand slam champion, British number one and, inevitably, carrying the hopes of a nation.Second-round exits at the Australian and French Opens may have tempered expectations slightly, but men’s number one Norrie says the focus will...
TENNIS・3 HOURS AGO
The Independent

Liverpool fans jubilant ahead of Champions League Final in Paris

Liverpool fans are cheering with trepidation at a fan zone in Paris ahead of the Reds’ game against Real Madrid in the Champions League final.The match will take place at the Stade de France and, for the occasion, many Reds fans traveled to France by car, train, flight and some even in speedboats.The club is keen on winning the seventh European Cup in its history. Tonight offers a special chance for revenge, after the 2018 final when Gareth Bale scored an overhead kick which lead Madrid to victory in Kyiv. Click here to sign up to our newsletters. Read More Jurgen Klopp dedicates Liverpool’s Champions League final to people of UkraineTeenager found guilty of murdering 12-year-old Ava White
CINCINNATI, OH・2 HOURS AGO
The Independent

Liverpool’s Champions League final against Real Madrid was delayed amid chaotic scenes outside the Stade de France.France’s national stadium stepped in to host the showpiece after St Petersburg was stripped of the final in the wake of Russia’s invasion of Ukraine.This is the third time that the Stade de France has hosted the Champions League final but there seemed a distinct lack of organisation around this occasion.Kick-off has been delayed by 15 minutes. #UCLfinal— UEFA Champions League (@ChampionsLeague) May 28, 2022There were shambolic scenes outside the ground in the hours before the match and the stadium announcer confirmed at 8.46pm...
1 HOUR AGO
The US Sun

Has any English side won the Champions League, FA Cup and League Cup in one season?

LIVERPOOL are set to face Real Madrid in the Champions League final TONIGHT - and this win could be more special than ever. The Reds have the chance to complete a cup treble, winning every knockout tournament they are competing in. But has it ever been done before?. Have any...
PREMIER LEAGUE・41 MINUTES AGO

Daniil Medvedev has his sights set on returning to the world number one spot after his first reign at the top lasted just a fortnight.The 26-year-old revealed he even Googled ‘shortest time as world number one’ after Novak Djokovic reclaimed his place at the summit earlier this year.The controversial decision to strip Wimbledon of ranking points will skew the standings with Medvedev in with a chance of climbing back above Djokovic despite being one of the Russians banned from playing at SW19.It is without doubt a strange situation but Medvedev insisted: “For sure I want to be there more than two...
TENNIS・4 HOURS AGO
The Independent

Jai Hindley is set to become the first Australian winner of the Giro d’Italia after taking control of the race on the penultimate stage in the Dolomites.The Bora-Hansgrohe rider began the day three seconds behind Richard Carapaz of Ineos Grenadiers but surged ahead of his rival on the final climb of the Passo Fedaia.With only a 17.4 kilometres time trial in Verona to come on Sunday, Hindley’s lead of one minute and 25 seconds should be ample to see him secure a first Grand Tour victory.The 26-year-old wore the Maglia Rosa at the same stage two years ago only to...
CYCLING・4 HOURS AGO