Cryptocurrencies often are associated with the idea of storing money or trading assets. And they are the doorway to the world of decentralized finance. But cryptocurrencies also are making a name for themselves well beyond financial transactions. In fact, they're becoming the key to new worlds. I'm talking about the metaverse , or virtual worlds where people can socialize, attend concerts, and even buy land.

One of these players that's been making headlines is The Sandbox (CRYPTO: SAND) . It's a game built on the Ethereum blockchain -- so all of the gaming activity happens there. And players use Sand tokens to make purchases in this virtual world. The Sandbox climbed more than 19,000% last year just as the game was getting started. Now the question is could this metaverse crypto, from today's level, be a multibagger? Let's find out. 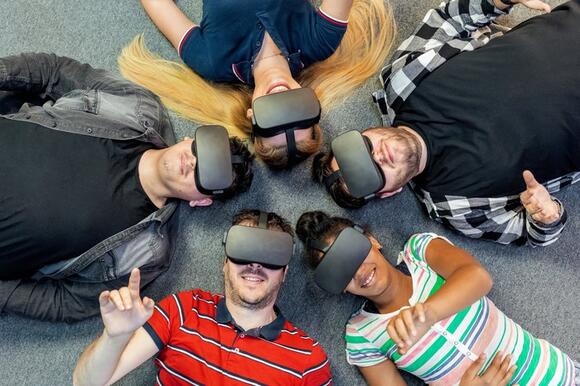 First a little bit about this dynamic player. The Sandbox is a play-to-earn game. That means as you play you can buy land, for instance. Then you can sell that land to other players to earn a profit. All transactions are done with Sand tokens. What's put The Sandbox in the headlines? A lot of attention from celebrities including rapper Snoop Dogg. He bought land in The Sandbox and is building a mansion there. Players can study the map of lots available and even buy one next to the famous rapper. Or they can buy an access pass to Snoop Dogg metaverse experiences and parties. Other well-known builders include video game giant Atari .

Interest in The Sandbox is climbing. The number of active wallets -- or those that bought or sold an asset -- rose from about 4,000 in January of last year to nearly 25,000 today, according to nonfungible.com.

The Sandbox recently completed its first Alpha multiweek gaming event and is already planning the next one. Users gain access by winning a pass or buying one -- if another player is willing to sell. The Sandbox said Alpha season 1 included more than 150,000 hours played and more than 200,000 visitors.

When it comes to market value, The Sandbox right now is the world's 39th biggest cryptocurrency. Can it become a multibagger and climb significantly higher? One big risk for The Sandbox is it depends entirely on the popularity of gaming . You can't use the Sand token in the real world. So, an investment in The Sandbox is a bet that the game will gain in popularity -- and manage to stand out among rivals.

But if The Sandbox continues to attract players, it could become a multibagger. The move works from a math perspective too. The Sandbox trades for about $4.48 today and has a circulating supply of 921 million tokens. If it tripled, its market value would top $12 billion. That would make it the 16th biggest cryptocurrency according to market capitalization.

The cryptocurrency market is volatile -- so such a move could happen quickly. And the market is also risky -- so such a move may not happen at all. When buying cryptocurrency, it's important to only invest what you can afford to lose. That said, The Sandbox is a player to watch. It's drawing interest from big names and gaming fans. If they stick with it, The Sandbox could gather momentum -- and maybe even become a multibagger.

10 stocks we like better than The Sandbox
When our award-winning analyst team has a stock tip, it can pay to listen. After all, the newsletter they have run for over a decade, Motley Fool Stock Advisor , has tripled the market.*

They just revealed what they believe are the ten best stocks for investors to buy right now... and The Sandbox wasn't one of them! That's right -- they think these 10 stocks are even better buys.

Coinbase's stock is down nearly 74% this year alone.
STOCKS・1 DAY AGO
The Motley Fool

Anticipation around the Ethereum merge is building, with a key update provided today.
ECONOMY・2 DAYS AGO
The Motley Fool

Which beaten-down fintech stock is a better turnaround play?
STOCKS・1 DAY AGO

Elon Musk, the world’s wealthiest man, who thinks tunnels are immune to natural disasters, is purchasing Twitter. The company confirmed on Monday afternoon that it had accepted the billionaire’s offer. “Twitter, Inc. today announced that it has entered into a definitive agreement to be acquired by an entity wholly owned by Elon Musk, for $54.20 per share in cash in a transaction valued at approximately $44 billion,” reads the official press release. “Upon completion of the transaction, Twitter will become a privately held company.”
BUSINESS・27 DAYS AGO
electrek.co

You could make even more with several of the stocks continuing to soar this year.
STOCKS・2 DAYS AGO

It's advice worth taking right now.
STOCKS・1 DAY AGO

CEO of MicroStrategy, Michael Saylor, said in a broadcast interview that the current crypto winter will accelerate crypto regulation and showcase Bitcoin's digital supremacy.
MARKETS・2 DAYS AGO
The Motley Fool

The stock for these two world-beaters is trading at a major discount to historical valuations.
STOCKS・22 HOURS AGO
The Motley Fool