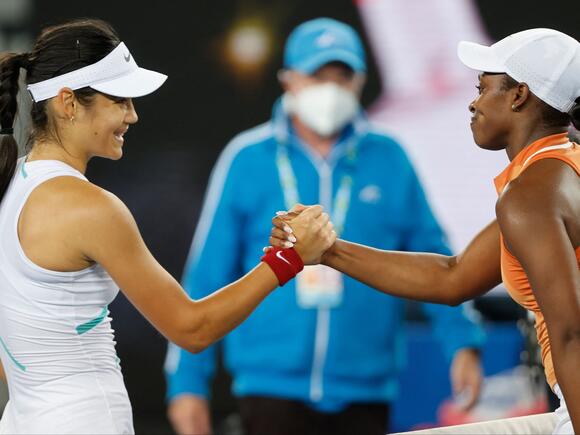 Sloane Stephens appeared to question Emma Raducanu ’s on-court behaviour and said the 19-year-old “still has a lot to learn” after the pair’s first-round match at the Australian Open .

Raducanu emerged victorious after a volatile match in which she blitzed the first set in just 17 minutes before being broken three times on her own serve in the second. However, as the momentum threatened to turn against her, Raducanu recovered brilliantly to dominate the deciding set.

Speaking to the media after the match, though, Stephens seemed to suggest that some of Raducanu’s behaviour had been a little theatrical.

“Everyone saw after the first point she gave like a massive scream,” Stephens said. “She played me, someone she’s ranking-wise supposed to beat. And, I mean, yeah, she won.”

Stephens, who was once ranked as high as No 3 in the world but has suffered from long spells of inconsistency, also warned that Raducanu’s upward trajectory could dip before long.

“Because she is so young it’s definitely a long road, so there’s going to be a lot of ups and downs. I think she, yeah, has just a lot to learn,” Stephens added.

“I was talking to someone in the locker room and I’m like, ‘We’ll be here when she comes down’,” Stephens said, before quickly clarifying: “Not Emma but just in general. It all is like a cycle, and I think learning how to deal with it early on is the best way to handle it. Just because there’s always a lot of ups and downs in tennis.”

Raducanu, who will face Montenegro’s Danka Kovinic in the second round, said she took inspiration from Andy Murray ’s exhausting five-set thriller against Nikoloz Basilashvili earlier on Tuesday.

“I was, actually [watching his match], because when I was in the third set, I thought ‘Andy was up a set. And then he got pushed to five. But he fought back so hard in the fifth set and took the decider.’

“So when I went to three [sets] I was also thinking ‘Actually, I can fight back and win the decider.’ You know, fight like he did. So I was definitely inspired by him.”

Daniil Medvedev has his sights set on returning to the world number one spot after his first reign at the top lasted just a fortnight.The 26-year-old revealed he even Googled ‘shortest time as world number one’ after Novak Djokovic reclaimed his place at the summit earlier this year.The controversial decision to strip Wimbledon of ranking points will skew the standings with Medvedev in with a chance of climbing back above Djokovic despite being one of the Russians banned from playing at SW19.It is without doubt a strange situation but Medvedev insisted: “For sure I want to be there more than two...
TENNIS・3 HOURS AGO
The Independent

Iga Swiatek has been killing time between matches at the French Open by reading Agatha Christie’s ‘Murder On The Orient Express’.Next the world number one might want to try ‘And Then There Were None’ after she suddenly found herself as the only one of the top 10 seeds still in the tournament.In fact, ‘The Case Of The Disappearing Seeds’ might be one for Hercule Poirot to investigate after Paula Badosa and Aryna Sabalenka crashed out on Saturday, joining seven others on the Roland Garros missing list.Third seed Badosa of Spain retired injured at 6-3 2-1 down against Russia’s Veronika Kudermetova,...
TENNIS・3 HOURS AGO
The Independent

Emma Raducanu has been urged to “embrace” the spotlight she will be under at this year’s Wimbledon by fellow Brit Cameron Norrie.Raducanu is gearing up to return to the scene of where her meteoric rise began with her run to the fourth round last year.The 19-year-old went on to shock the sporting world by winning the US Open, and will return to SW19 as a grand slam champion, British number one and, inevitably, carrying the hopes of a nation.Second-round exits at the Australian and French Opens may have tempered expectations slightly, but men’s number one Norrie says the focus will...
TENNIS・1 HOUR AGO
The Independent

Iga Swiatek had to negotiate a rare second-set dip to extend her winning streak and take another step towards her second French Open title.The world number one seemed to be cruising into round four as she led 6-3 4-1, with two breaks of serve, against Danka Kovinic of Montenegro.But four games later Kovinic, ranked 95 in the world, had hit back to lead 5-4.Swiatek managed to reset and claim a 6-3 7-5 victory for a 31st consecutive win.“I wanted to play really aggressively but sometimes I feel I was putting in too much power and it was hard to control...
TENNIS・4 HOURS AGO