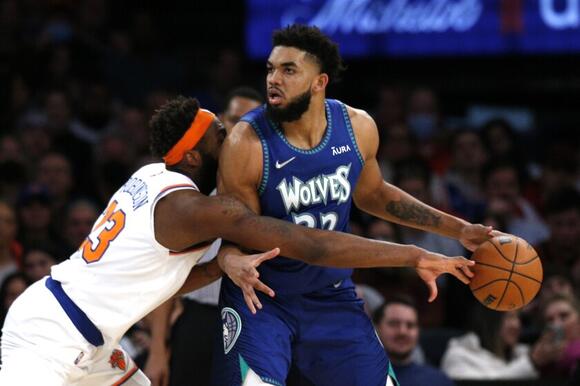 The Knicks got a strong game from Kemba Walker in his return from a nine-game absence with a sore left knee and nursed a lead for most of the fourth quarter.

But the Timberwolves rallied and then held on when Alec Burks missed a 3-pointer that would have won it for New York.

Anthony Edwards scored 21 points and Towns had 20 for the Wolves, who won for the sixth time in eight games to level their record at 22-22. D’Angelo Russell added 17 points.

Evan Fournier scored 27 points and Julius Randle had 21 for the Knicks, who lost for the second straight day and dipped back below .500 at 22-23. Walker scored 17 of his 19 points in the second half.

SAN FRANCISCO (AP) — Klay Thompson scored 21 points, Stephen Curry had 18, and the Warriors returned from a tough trip to beat the Pistons.

Curry, back after a one-game absence, shot 6 for 11 with four 3-pointers and added eight assists. He fell on his right hand during a win at Chicago on Friday, then missed Sunday’s 119-99 loss at Minnesota.

Andrew Wiggins scored 19 points for a Warriors team happy to be home for an extended stretch after having lost five of seven, including three of four on the road.

Isaiah Stewart had 14 points and 11 rebounds for the Pistons in another lopsided defeat after a 135-108 home loss to the Phoenix Suns on Sunday.

The Golden State Warriors are on the verge of booking a return trip to the NBA Finals, which is a testament to the dominance of this team with Stephen Curry, Klay Thompson, and Draymond Green at the core. But Steve Kerr’s role in the team’s success can’t be overlooked, and in one moment during the final stretch of the Warriors’ 109-100 win in Game 3 over the Dallas Mavericks, he showed who’s really in charge by blasting his team’s best player for a defensive lapse that led to a Luka Doncic triple.
SAN FRANCISCO, CA・1 DAY AGO