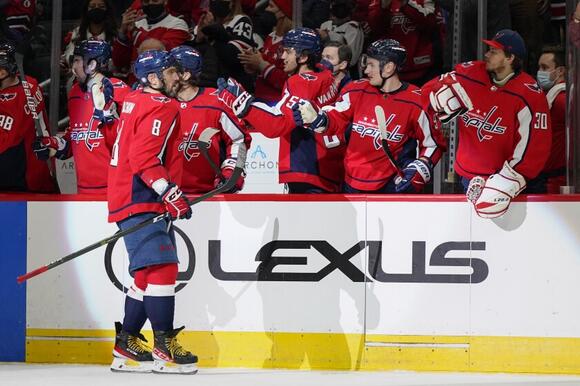 Wilson’s goal 26 seconds into the 3-on-3 OT gave the Capitals their first victory in that situation this season. They lost their previous seven games decided after regulation but before a shootout.

Washington needed overtime after Pierre-Luc Dubois tied it with 1:05 left. Vitek Vanecek stopped 30 of the 33 shots he faced, rebounding from allowing two goals in the opening minutes.

Ovechkin beat Connor Hellebuyck, who made 27 saves. It was Ovechkin's 757th goal was also his 1,375th point, putting him ahead of Mike Modano for 24th on the career scoring list.

Rasmus Andersson got his first goal of the season, Matthew Tkachuk and Blake Coleman also scored and Johnny Gaudreau had four assists for Calgary. The Flames snapped a four-game skid and won on home ice for the first time since Nov. 29. They were 2-7-1 in their past 10 games.

Jacob Markstrom had 28 saves for Calgary. He had given up at least four goals in his previous five starts.

Teuvo Teravainen, Seth Jarvis, Derek Stepan and Andrei Svechnikov also scored for the Hurricanes, who have won two straight and seven of nine. They earned the win playing in their first road game in 17 days because of COVID-19 postponements.

Frederik Andersen had 31 saves for Carolina.

The Hurricanes’ early barrage caused the Bruins to pull goaltender Tuukka Rask in favor of Linus Ullmark after Rask allowed five goals on 12 shots in the first period. It marked the first time Boston had allowed five goals in the opening period since March 3, 2008, at Washington.

Hedman was one of only four Lightning defensemen who dressed after three were scratched due to injuries. He scored his first goal since Dec. 16 at 13:17 of the first period to extend his point streak to four games.

Hedman then scored the go-ahead goal at 10:43 of the third when he took Kucherov’s pass and scored on a snap shot. It was the ninth multigoal game of Hedman’s career, and one of three third-period goals by the Lightning that put the game away.

Kucherov had a power-play goal in the second period along with an assist. The right wing, who missed 32 games with a lower-body injury that required surgery, has 11 points (four goals, seven assists) in six games since returning to the lineup.

Mathieu Joseph and Steven Stamkos also had a goal and an assist apiece for the Lightning, who have a 10-game winning streak over the Kings. Pierre-Edouard Bellemare also scored and Andrei Vasilevskiy stopped 32 shots.

Blake Lizotte, Alex Iafallo, Arthur Kaliyev and Phillip Danault scored for the Kings, who have dropped two straight after a four-game winning streak.

DALLAS (AP) — Christian Dvorak scored twice, Sam Montembeault made a career-high 48 saves for his second win of the season and Montreal beat Dallas for its third road win.

Dvorak and Michael Pezzetta scored 22 seconds apart in the second period, and Tyler Toffoli, Dvorak and Josh Anderson beat Jake Oettinger three times in 3:15 for a 5-2 lead early in the third. Braden Holtby replaced Oettinger after Anderson’s goal at 4:18.

Jacob Peterson, Tyler Seguin and Joe Pavelski scored for Dallas, which never led. The Stars have been outscored 15-5 during a three-game losing streak.

Montreal fell one short of its highest number of goals in a game this season.

PHILADELPHIA (AP) — Oliver Wahlstrom scored in the ninth round of a shootout and New York sent Philadelphia to its ninth straight loss.

The shootout went on and on until Wahlstrom finally got one past Carter Hart to help the Islanders beat the Flyers for the second straight night.

Claude Giroux snapped a tie with his 12th goal early in the third period for the Flyers. Travis Konecny and James van Riemsdyk also scored.

Houser became the sixth goalie to start a game for Buffalo this season. Mark Jankowski, Dylan Cozens and Alex Tuch scored for the Sabres.

Drake Batherson had the lone goal for Ottawa, and Anton Forsberg stopped 30 shots.

Ottawa’s first home game since Dec. 11 was played without fans because of COVID-19 regulations.

Philip Tomasino scored and David Rittich stopped 21 shots for Nashville, which has lost four in a row. The Predators went 12-1-1 in their 14 previous games before the slide.