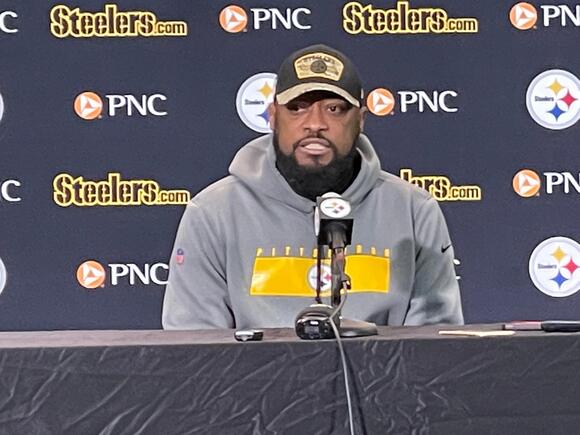 Tomlin said he will leave it to Kevin Colbert to address his future as numerous reports that Colbert will retire after the 2022 NFL Draft.

“Our plan is to proceed in the short-term like we always do,” Tomlin said.  “He’s on me already bringing me up-to-speed with draft availability.  Planning on how we are going to move, we talked about Mobile this morning.  You don’t want to talk about the Senior Bowl this time of year because that means you aren’t in the tourney.”

Tomlin praised their relationship and their ability to be honest and straight-forward in conversations with each other.  He said the team plans to operate as it always has in terms of the offseason.

Tomlin addressed his thoughts on the potential starting quarterback for next season.

He also doubled-down on a comment from earlier this season about the importance of having a mobile quarterback in today’s NFL.

“Quarterback mobility is valued,” Tomlin said.  “Not only by me, but everyone.  It’s a component of today’s game and increasingly so.”

“We didn’t play as well as we liked,” Tomlin said.  “We have to get better in that area.”

He said no excuses because of injury or inexperience, rather they are what they put on tape and what their record showed.  The Steelers were worst in the NFL in rush defense allowing 2,483 yards and an amazing 5 yards per attempt.

Tomlin said there were aspects of linebacker Joe Schobert’s game that could have been better, but that’s the case for nearly every player.  He also said it was a challenge for Devin Bush coming back from major knee surgery.

Defensive end Stephon Tuitt missed all year due to the death of his brother and to a knee injury.  Cam Heyward was very emotional about his missing the season.  Tomlin said he has not yet talked to Tuitt (11 sacks in 2020) about next year, his cap hit is $13.975 million in 2022.  He also has not yet talked to defensive lineman Tyson Alualu, who missed most of 16 games due to injury.  The 34-year-olds cap his is $3.462 million.

Saying they are open for business with free agents, Tomlin underscored it’s free agency not just for the player, but for the team.  The 15-year Steelers head coach said he would like corners Ahkello Witherspoon and Joe Haden back, but will see how the process plays out.

Deciding not to pick up his option year, Steelers 2018 first round pick and starting safety Terrell Edmunds is a free agent.  While seemingly thinking of moving on by not giving him a fifth season, his play this year may have changed some minds.

“Think about availability,” Tomlin said as Edmunds has played over 4,000 snaps in four seasons.  “I never want to underscore that.  This has been a guy that’s been ridiculously available to us, not only this year but over the course of his career.  He was a thousand snap defender as a rookie.  Often time we don’t talk enough about availability.”

“Productivity, obviously, he did some good things there.”

He had his second-best season in completion percentage allowed, tackles and passes defended.

Tomlin said he’s appreciative of what he did and will see where the roads lead us.  Those last six words describes so much of this coming off season.

Trubisky was asked about, but did not confirm, the order the quarterbacks were used. But video of the practice shows how the Steelers split up he, Mason Rudolph, Kenny Pickett and Chris Oladokun.
PITTSBURGH, PA・2 DAYS AGO
93.7 The Fan

Arians, Whaley react to Khan being hired as Steelers GM

Super Bowl champion coach and former Steelers offensive coordinator Bruce Arians and other are reacting to the hiring of Omar Khan as the team’s next general Manager.
PITTSBURGH, PA・1 DAY AGO
93.7 The Fan

Claypool: I ‘work my ass off’ to be best WR in NFL

While Steelers receiver Chase Claypool claims to not be bothered by it, there’s certainly a sense that public perception might’ve gotten under his skin during a 2021 season that, while productive, also could be characterized as disappointing.
PITTSBURGH, PA・13 HOURS AGO
93.7 The Fan

Tuitt not at Steelers OTAs, but Heyward says he expects him at some point

The future of Stephon Tuitt and his career with the Steelers remains a mystery The defensive end, who missed all of last season due to injury and the sudden death of his brother was not on the field for the first day of Steelers OTAs.
PITTSBURGH, PA・2 DAYS AGO
93.7 The Fan

‘It’s stealing for me’ Myles Jack happy with Steelers

Listen to what LB Myles Jack told 93.7 The Fan as the big reason he came to the Steelers and how he’s building a relationship with Devin Bush
PITTSBURGH, PA・1 DAY AGO
93.7 The Fan

LISTEN: Tomlin’s thoughts on the 1st day of OTAs

Steelers head coach Mike Tomlin addressed, kind of, Stephon Tuitt not being at camp, the QB situation & his thoughts as voluntary work began Tuesday
PITTSBURGH, PA・2 DAYS AGO
93.7 The Fan

Watt driven by big goal he’s yet to accomplish

Hear what TJ Watt said about not being satisfied with a big goal still out there. He also responded to the changes on defense & improving in 2022
PITTSBURGH, PA・18 HOURS AGO

He took a lot of heat for saying his losing-record team was making progress on Sunday, listen to how Pirates GM Ben Cherington explained the meaning
PITTSBURGH, PA・10 HOURS AGO
93.7 The Fan

Is the timing perfect for Marc-Andre Fleury to return to Pittsburgh?

For the entirety of the summer of 2022, the Pittsburgh Penguins will be hyper focused on free agents. A position of interest for the Pens is backup goalie, as both Casey DeSmith and Louis Domingue
PITTSBURGH, PA・14 HOURS AGO
93.7 The Fan

The Pirates haven’t scored more than four runs in a game in a couple of weeks, 23 total in the last 12 and wasted solid pitching again in loss to Colorado
PITTSBURGH, PA・2 DAYS AGO
93.7 The Fan

The Bucs best home run hitter goes on the injured list as Tuesday night’s starting pitcher called up from AAA and an OF makes his big-league debut
PITTSBURGH, PA・2 DAYS AGO

Left off the team’s 40-man roster in the off-season, Cal Mitchell was determined to show the Bucs they made a mistake, his work led to his MLB debut Tuesday
PITTSBURGH, PA・2 DAYS AGO
93.7 The Fan

Pirates OF tops among NL Rookies in homers

With all of the Pirates offensive struggles, the bright spot of rookie Jack Suwinski who tells us how he’s found his power & keeping success going forward
PITTSBURGH, PA・1 DAY AGO