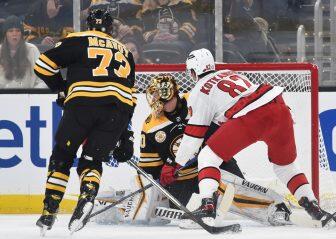 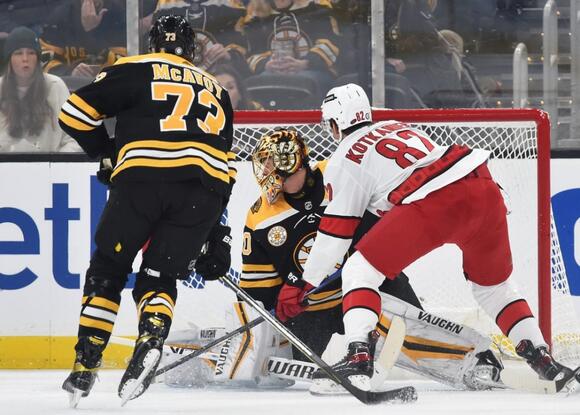 Jesperi Kotkaniemi scored twice in his team’s five-goal first period and Frederik Andersen recorded 31 saves to propel the Carolina Hurricanes on the way to a 7-1 rout of the host Boston Bruins on Tuesday night.

Teuvo Teravainen, Seth Jarvis, Derek Stepan, Jaccob Slavin and Andrei Svechnikov each added one goal apiece for Carolina. Tony DeAngelo logged three assists, Slavin had two and Teravainen, Stepan and Svechnikov had one apiece for the Hurricanes, who avoided a third loss in four games with their 11th win in 14 games overall.

Slavin was making his return after missing three games in the NHL’s COVID-19 protocol.

“Our guys are playing hard, and when everyone else is playing hard, it makes it pretty easy to step in and continue to keep doing what we were doing before I got out,” Slavin told Bally Sports South after the Hurricanes’ first-period outburst.

Patrice Bergeron scored the lone goal for Boston, which had its season-best five-game winning streak snapped. The loss was just the Bruins’ second in 10 games since the NHL’s COVID-related schedule pause.

Playing in his second game since rejoining the team in free agency after offseason hip surgery, Bruins goalie Tuukka Rask stopped only seven of 12 shots before being relieved by Linus Ullmark. The backup allowed two goals on 22 shots.

Boston defensemen Matt Grzelcyk and Connor Clifton returned after clearing the league’s COVID protocol. However, the Bruins placed defenseman Mike Reilly in the protocol before the game.

Teravainen’s 11th goal of the season opened the scoring 3:44 into the opening period. Kotkaniemi’s tally at the 6:03 mark doubled the lead before Bergeron scored his 12th at 11:13 on a power play to bring Boston within 2-1.

Kotkaniemi’s ninth goal of the season just 13 seconds later restored the two-goal advantage for Carolina. Jarvis scored at the 16:01 mark, his seventh, and Stepan lit the lamp with his fifth at 16:57 to cap the early onslaught.

Slavin (second of the season) and Svechnikov (13th) each scored in the first eight minutes of the third.

Before the game, the Bruins retired the No. 22 of Hall of Famer Willie O’Ree. The now 86-year-old O’Ree broke the NHL’s color barrier in the 1957-58 season and played 45 games with Boston over two non-consecutive seasons.

The NHL season officially started back on October 12. In this article, we track all the NHL games today as
NHL・12 HOURS AGO
Sportsnaut

If the Boston Celtics are going to tie up their Eastern Conference Finals series against the Miami Heat, they’ll have
BOSTON, MA・1 DAY AGO
Sportsnaut

It will be the Miami Heat’s chance to turn the tables in the Eastern Conference finals when they play host
BOSTON, MA・37 MINUTES AGO
Sportsnaut

Two notable hitting streaks and a winning streak will be on the line Tuesday night when the St. Louis Cardinals
SAINT LOUIS, MO・12 HOURS AGO

The Chicago Bulls said Tuesday that guard Zach LaVine had successful arthroscopic surgery on his left knee. LaVine, who was
CHICAGO, IL・2 HOURS AGO