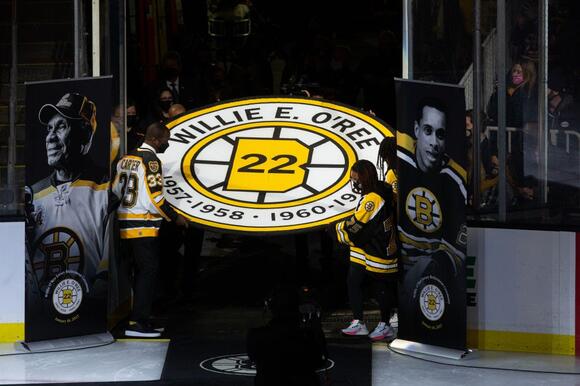 Willie O’Ree did not grow up a Bruins fan. In fact, the New Brunswick native was a Canadiens fan as a kid.

That changed forever 64 years ago Tuesday, when O’Ree got called up to the Bruins to make his NHL debut and become the first Black player in the NHL. The opponent that night: Montreal.

“When the Bruins called me up to make my debut against the Montreal Canadiens, I knew my heart would be with the Bruins forever,” O’Ree said in a video played on the TD Garden jumbotron Tuesday night.

Now, so is his number. Prior to Tuesday night’s game against the Carolina Hurricanes, the Bruins retired O’Ree’s No. 22, making it the 12th Bruins number raised to the rafters.

“I am overwhelmed and thrilled to be a part of the Bruins forever,” said O’Ree, who took part in the ceremony virtually from his home in San Diego.

O’Ree played one more game with the Bruins in 1958, and then 43 in the 1960-61 season. He finished his NHL career with four goals and 10 assists. He went on to play 18 more years of minor league hockey, mostly in southern California with the Los Angeles Blades and San Diego Gulls of the Western Hockey League.

Impressively, O’Ree did it all while being legally blind in his right eye after getting hit by a puck two years before his NHL debut. He hid the injury from the Bruins and other teams because he knew it likely would have meant the end of his career if anyone found out.

“Forget about what you can’t see, and focus on what you can see,” he told himself, as he explained on Tuesday.

Widespread recognition for the history O’Ree made as a player did not come immediately. It wasn’t until the 1991 All-Star Game that the NHL publicly honored him for breaking the color barrier.

Seven years later, the league named him their Diversity Ambassador, a position he has held ever since. It is in that role that he has arguably made an even bigger impact on the sport, as O’Ree has traveled around North America to introduce the game to communities and children who likely wouldn’t learn about or play hockey otherwise.

“What I wanted to do and what I wanted to try to do is expose as many boys and girls as possible and give them the opportunity to play the sport,” O’Ree said last year . “There are many clinics that I’ve attended just to let these boys and girls know that there is a sport that they can play. If they come and they don’t like it, they can just walk away from it. It’s not going to cost them anything. But I can honestly say, the number of clinics I’ve conducted over the years, and once I get these boys and girls on the ice, I’ve not had one boy or girl come up to me and say, ‘Oh Mr. O’Ree, I don’t like this, I’m not coming back.’ I’ve got a good record going.”

Now 86, O’Ree’s number retirement is the latest in a long list of overdue honors he has received in recent years.

In 2008, the Bruins and the NHL honored him before a game at TD Garden for the 50th anniversary of his first NHL game. That same year, The Sports Museum honored him with a special exhibit; his hometown of Fredericton, New Brunswick named a new sports complex after him; and he was awarded the Order of Canada, the country’s highest civilian honor.

Ten years later, on the 60th anniversary, he was inducted into the Hockey Hall of Fame as a builder for his contributions to the game and the city of Boston dedicated a street hockey rink named in his honor. The next year brought a documentary about his life and 2020 a special Canadian silver coin with his face on it.

And now, his No. 22 will hang in the Garden rafters forever.

“To the Bruins fans, I am honored to have had the pleasure of playing before you. Thank you for your tremendous love and support,” O'Ree said. “This is an unforgettable day.”

Boston Bruins president Cam Neely said on Thursday that he plans to extend the contract of general manager Don Sweeney. He also said no decision has been been made about whether to keep coach Bruce Cassidy.
BOSTON, MA・1 DAY AGO
WEEI Sports Radio

Why are the Bruins letting Bruce Cassidy twist in the wind?

Boston Bruins president Cam Neely put an end to speculation about general manager Don Sweeney’s future on Thursday. A day later, they are still allowing head coach Bruce Cassidy to twist in the wind, though. Why?
BOSTON, MA・6 HOURS AGO
Yardbarker

The Stars finished fourth in the Central Division, posting a record of 46-30-6. Dallas earned a berth into the Stanley Cup Playoffs but lost to the Calgary Flames in seven games in the first round. Bowness, 67, was hired ahead of the 2019-20 season and spent three seasons behind the...
DALLAS, TX・15 MINUTES AGO

What's going on with Al Horford and Covid?

Boston Celtics center Al Horford entered the NBA’s Health and Safety protocols before Game 1 of the Eastern Conference Finals against the Miami Heat, but there are more questions than answers.
BOSTON, MA・2 DAYS AGO
WEEI Sports Radio

Thinking Out Loud: Celtics' momentum, Bergie's future and the voices in Mac's head

There is plenty to touch on when it comes to the New England sports scene these days, including the Celtics’ playoff run, the future of Patrice Bergeron and who will be yelling at Mac Jones.
BOSTON, MA・1 HOUR AGO
WEEI Sports Radio

Mike Lowell got trash-talked to by referee at Celtics' game

Former Boston Red Sox third baseman Mike Lowell got a surprising bit of trash talk from an NBA referee while sitting courtside at the Celtics vs. Heat game.
MIAMI, FL・1 DAY AGO

Boston Celtics guard Derrick White is missing Game 2 of their Eastern Conference Finals series against the Miami Heat, and there’s nothing wrong with that.
BOSTON, MA・1 DAY AGO
WEEI Sports Radio

Boston Celtics center Al Horford was listed as a close contact of a member of the team’s support staff who tested positive for Covid-19, reports Steve Bulpett of Heavy.com.
BOSTON, MA・10 HOURS AGO