‘This 5G issue is complicated’: What does it mean for Harrisburg Int’l Airport? 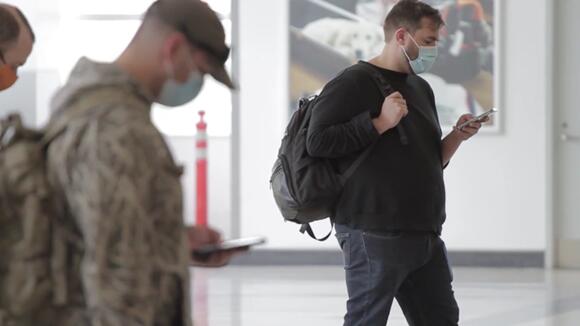 HARRISBURG, Pa. (WHTM) — Verizon and AT&T wouldn’t say specifically Tuesday whether any of the 5G cell phone towers they agreed not to turn on at midnight surround Harrisburg International Airport.

Harrisburg was one of 50 airports in the U.S., and one of three in Pennsylvania, listed by the Federal Aviation Administration (FAA) where new 5G service — which the FAA and airlines worry could interfere with airplane cockpit equipment — has airlines scrambling to implement new procedures for pilots, particularly in low-visibility conditions.

The telecom and airline industries — and to a degree, the Federal Communications Commission (FCC) and FAA, which regulate them, respectively — have traded accusations about who is at fault for issue on the eve of a long-anticipated 5G rollout.

“We are frustrated by the FAA’s inability to do what nearly 40 countries have done, which is to safely deploy 5G technology without disrupting aviation services,” read part of a statement by AT&T. (Its full statement, and Verizon’s full statement, are below.)

But the FAA says a country like France — an example commonly cited by the telecom industry — isn’t comparable to the U.S. because cell phone towers there are farther from airports, they’re less powerful and the antennas are angled down rather than out.

A message Tuesday to members from the Air Line Pilots Association, which represents pilots at airlines including Delta and United, blamed “the FCC’s failure to do its job and take aviation safety into account” with the 5G rollout.

A commercial airline pilot who spoke with abc27 News on the condition of anonymity explained that the “decision altitude” at HIA is 508 feet above sea level, or 200 feet above ground level. If pilots can’t see the runway at that height, they can’t land. Rather than landing in questionable conditions, flights divert to other airports all the time — just this week, HIA-bound flights ended up landing in Philadelphia and Hartford when the weather here was bad, airport spokesman Scott Miller noted.

But that’s inconvenient for passengers and costly for airlines, which worry 5G-related issues could cause far more diversions. The pilot who spoke with abc27 News said based on a recent FAA “notice to air mission,” or NOTAM, pilots could have to decide far earlier to divert to a different airport when a safe landing at the original destination could have been possible.

What to know about 5G cell service, how it affects you, planes and diplomacy

Verizon and AT&T are able to activate an overwhelming majority of their 5G towers, which aren’t near airports. But generally, cell phone towers that serve airports are important because frequent business travelers are coveted customers for mobile phone companies.

Earlier in the week, the FAA cleared some common aircraft — including some Airbus 320s and Boeing 737s, among others — to land as usual in low-visibility conditions at some of the airports in question, and it said it expected to “issue more approvals in the coming days.” It said the approvals were based on the specific altimeters used by those aircraft. Altimeters measure altitude and are the equipment airlines worry could be affected by 5G signals.

An analysis by abc27 News of Cirium airline schedule data found the approvals so far could benefit Harrisburg less than the other two Pennsylvania airports on the FAA’s list. Based on the analysis, 53 percent of aircraft that land at Philadelphia are among the types covered by the FAA’s approval for landing with low visibility near 5G towers. The comparable figure at Pittsburgh is 43 percent and at Harrisburg — where more flights are on smaller jets not yet covered by the approval — just 15 percent.

What to know as mobile providers shut down 3G networks

The FAA approved specific aircraft to land despite low visibility and 5G at specific airports, so those figures likely aren’t in precise proportion to the percentage of landings at each airport that would be unaffected by the issue.

Experts emphasized the question isn’t whether airplanes can fly safely — they can — but how much hassle could be required to achieve safety while the issue is resolved.

FAA releases list of 50 airports to have 5G buffer zones

At our sole discretion we have voluntarily agreed to temporarily defer turning on a limited number of towers around certain airport runways as we continue to work with the aviation industry and the FAA to provide further information about our 5G deployment, since they have not utilized the two years they’ve had to responsibly plan for this deployment.  We are frustrated by the FAA’s inability to do what nearly 40 countries have done, which is to safely deploy 5G technology without disrupting aviation services, and we urge it do so in a timely manner. We are launching our advanced 5G services everywhere else as planned with the temporary exception of this limited number of towers.

Verizon is proud to lead the nation in 5G. Tomorrow, Verizon will launch its 5G Ultra Wideband network which will enable more than 90 million Americans to experience the transformative speed, reliability and power of this game-changing network on the go or in their homes or businesses. Americans have been clamoring for 5G and tomorrow we will deliver it.  As the nation’s leading wireless provider, we have voluntarily decided to limit our 5G network around airports. The Federal Aviation Administration (FAA) and our nation’s airlines have not been able to fully resolve navigating 5G around airports, despite it being safe and fully operational in more than 40 other countries. Thanks to the best team in the industry for delivering this technology which promises a revolutionary next step in wireless communications including tremendous benefits for our nation.

It was the Harsco building for half a century, but Harsco has moved to Philadelphia.
WORMLEYSBURG, PA・2 HOURS AGO
abc27 News

Stop Hopper is similar to a ride-share service. Customers can use an app on their phone and request a ride to an area within the service zone.
CHAMBERSBURG, PA・1 HOUR AGO
abc27 News

METZ, W.Va. (AP) — A small plane with at least three people on board crashed in northern West Virginia, authorities said. The single-engine plane was flying from Bloomfield, Indiana, to Myerstown, Pennsylvania, when it went down in a wooded area Thursday in the Marion County community of Metz, the Federal Aviation Administration said in a […]
METZ, WV・3 DAYS AGO

Musicians and singers came together in Harrisburg Sunday to share their talent as part of a benefit concert for Ukraine. The proceeds will go to a nonprofit focused on helping relief efforts on the ground.
HARRISBURG, PA・15 HOURS AGO
abc27 News

YORK, Pa. (WHTM) — One Midstate fire department just got brand new members. Four new firefighters took their oaths in York on Thursday, Aug. 11. Starting next Monday, they will start training at the fire academy. Like all new firefighters, they will have to complete a one-year probationary period. “The passion I’ve always felt wanting […]
YORK, PA・3 DAYS AGO
abc27 News

York County residents can breathe a little easier the next time a disaster happens as the county is working to make sure everyone is prepared.
YORK COUNTY, PA・4 DAYS AGO
abc27 News

U.S. Sen. Bob Casy (D-Pa.) was at the Pennsylvania Capitol on Thursday lauding the recently passed Inflation Reduction Act and what it could mean for Pennsylvanians.
PENNSYLVANIA STATE・4 DAYS AGO

The state police fire marshal was on the scene of a fire at an abandoned bar on the 100 block of Enola Drive in Cumberland County Monday morning -- the same bar that was damaged by arson last week.
CUMBERLAND COUNTY, PA・7 HOURS AGO
abc27 News

According to Hersheypark's website, the amusement park accepts card or phone payments but no longer accepts cash.
HERSHEY, PA・4 DAYS AGO
abc27 News

Old York hospital to be turned into apartments

A former hospital in York County will soon turn into an apartment building.
YORK COUNTY, PA・4 DAYS AGO

An overnight shooting has left at least one person injured in Harrisburg, according to Dauphin County dispatchers.
HARRISBURG, PA・4 HOURS AGO
abc27 News

HARRISBURG, DAUPHIN COUNTY (WBRE/WYOU)— A man from Harrisburg was sentenced for making false statements while purchasing multiple guns in three Pennsylvania counties, according to the U.S. Attorney’s Office for the Middle District of Pennsylvania. U.S. Attorney Gerard M. Karam said Eseyuiel Caraballo, age 37, of Harrisburg, was sentenced to five years of probation for attempting […]
HARRISBURG, PA・5 DAYS AGO
abc27 News

LEWISTOWN, Pa. (WHTM) — The Mifflin County School District got a $3 million grant from the State of Pennsylvania that will go towards renovations at its outdoor sports facilities. “This is really something that I personally have been talking about for well over 20 years,” Tish Maclay said. Athletic Director with the Mifflin County School […]
MIFFLIN COUNTY, PA・4 DAYS AGO
abc27 News

One person was killed and another 17 people injured when a vehicle struck a crowd gathered for a fundraiser at a Pennsylvania bar.
BERWICK, PA・1 DAY AGO
abc27 News

Police in Upper Allen Township, Cumberland County, say an elderly woman was struck in the head by a rock or similar object.
CUMBERLAND COUNTY, PA・5 HOURS AGO
abc27 News

DAUPHIN COUNTY, Pa. (WHTM) — A nonprofit youth program in Dauphin County is looking for a new home, trying to raise $200,000 to buy their own space. The nonprofit, Youth 10 X’s Better, needs a new space to host the many programs they run for kids. The lease on their current space is up in […]
DAUPHIN COUNTY, PA・1 DAY AGO