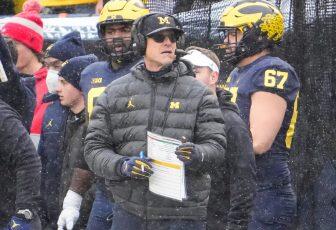 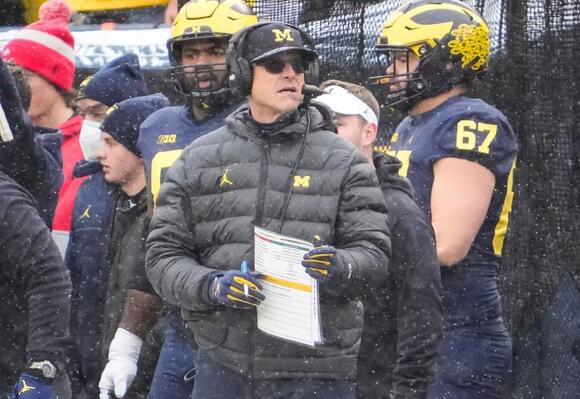 Michigan head football coach Jim Harbaugh has been hitting up the country recruiting potential new players for the Wolverines program.

To some, this seems to suggest that the former NFL Super Bowl head coach is going to remain with Michigan. However, that has not stopped rumors from persisting regarding a return to the professional ranks .

The father of a recruit who committed to Michigan back in December admitted that Harbuagh told him the head coach would entertain offers from NFL teams . More recently, the former San Francisco 49ers head coach has been linked to the Las Vegas Raiders. This seems to be a clear indication that Harbaugh is at least considering a move back to the NFL.

Then again, this could all be a contract ploy. Jim Harbaugh took a pay cut to remain at Michigan following a disappointing 2-4 COVID-19 shortened 2020 season — only to lead the team to a 12-2 record and a spot in the College Football Playoffs last season. He wants to get paid, and could be using the NFL as some sort of negotiating tactic.

According to this note from Nick Baumgardner of The Athletic , Harbaugh has been in contact with Michigan’s brass about a contract extension. Said conversations have gone well with the Wolverines offering him a “competitive” deal.

Harbaugh signed an extension with the program back in January of 2021 . Said deal called for a base salary of $4 million through the 2024 season. The base then increases to $4.4 million in 2025. His extension also calls for a maximum bonus of $3.475 million annually based on the following incentives.

Obviously, Harbaugh met some of these incentives during a brilliant 2021 season with Michigan. Even then, he’s vastly underpaid in the grand scheme of things .

As you can see, college football has become a big business for coaches. Three of the contracts above were agreed to within the past few months with both Riley ( Oklahoma ) and Kelly ( Notre Dame ) leaving their old progreams for new gigs.

Jim Harbaugh and potential return to the NFL

Remember, Gruden was working under a 10-year, $100 million contract. The two sides reportedly settled the financial aspect of his shocking departure with terms not known to the public.

For the Raiders, this is particularly interesting in that owner Mark Davis doesn’t have the deepest pockets among NFL owners (estimated net worth of $500 million). The Raiders themselves are said to be valued at $3.5 billion. Could that impact any potential chase after Harbaugh? 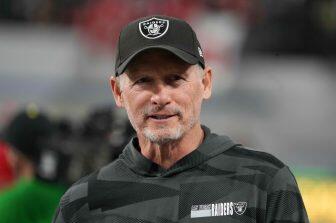 If Harbaugh is going to make the jump to the NFL after an extremely successful four-year run with the 49ers earlier in his career, the head coach will want to be rewarded for it.

It will take something within the $9-$12 million range to pry Jim Harbaugh from the Michigan Wolverines. The question now becomes who might offer that up?

A grand jury indicted former Georgia linebacker Adam Anderson on Tuesday and charged him with rape. Anderson will be arraigned
NFL・28 DAYS AGO
Sportsnaut

Our MLB Games Today schedule is back for the 2022 MLB season. Major League Baseball ended its lockout, officially clearing
NFL・2 HOURS AGO
Sportsnaut

The Super Bowl’s halftime show will go on without Pepsi. The soda and snack giant announced Tuesday that it will
NFL・12 HOURS AGO
Sportsnaut

Purdue’s Jaden Ivey is among the sharpest prospects in the 2022 NBA Draft. He’s electric off the dribble, can serve
NBA・19 HOURS AGO
Sportsnaut

Alabama picked up a four-star quarterback out of enemy territory on Tuesday. Eli Holstein, from Zachary, La., and rated the
BATON ROUGE, LA・21 HOURS AGO
Sportsnaut

Carolina Panthers running back Christian McCaffrey likely won’t play in any preseason games to try to keep him healthy for
CHARLOTTE, NC・18 HOURS AGO

The Arizona Cardinals have agreed to a contract with free agent running back Darrel Williams, the Schultz Report reported Tuesday.
KANSAS CITY, MO・19 HOURS AGO
Sportsnaut

Luka Doncic and the Dallas Mavericks are up against it in their Western Conference Finals series against the Golden State
DALLAS, TX・17 HOURS AGO
Sportsnaut

Milt Wagner, a former star guard at Louisville and the grandfather to top recruit D.J. Wagner, was announced Tuesday as
LOUISVILLE, KY・13 HOURS AGO