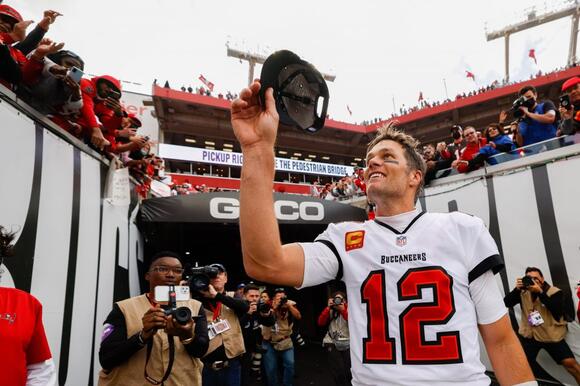 At the ripe age of 44, Tampa Bay Buccaneers quarterback Tom Brady is doing things that those 20 years younger than him couldn’t even imagine.

The Philadelphia Eagles found that out first-hand in Tampa’s blowout 31-15 win in the NFC Wild Card Playoffs last weekend. Leading the defending champions to the win, Brady completed 29-of-37 passes for 271 yards with two touchdowns and zero interceptions.

If you think that’s insane, get a load of this. The 44-year-old Tom Brady is older than every remaining opposing coach in the NFC Playoffs. Each and every one.

That’s not a typo.

Related: Where does Tom Brady rank among NFL Playoff quarterbacks this year?

When Brady made his debut as a member of the New England Patriots back in November of 2000, he was 23 years old and 112 days.

To put this into perspective, Sean McVay was 14 years old and attending Marist High School in Brookhaven, Georgia. He was a freshman. You know, taking part in pep rally’s, keg stands and dances with other teenagers.

Also in November of 2000, Kyle Shanahan wasn’t even of legal drinking age. So, what we he up to? He was a wide receiver with the Texas Longhorns — playing with the likes of Roy Williams and Major Applewhite.

As for LeFleaur, November of 2000 included him playing quarterback for Division II Saginaw Valley State before briefly playing for the Omaha Beef of the National Indoor Football League (that was a thing).

Oh, but we’re not even close to done here.

Back in 2010 when Tom Brady was going strong for his former Patriots team, Shanahan, LaFleur and McVay were all assistant coaches for the Washington Football Team. Yeah, we had to throw some shade in the direction of disgraced owner Daniel Snyder and Co .

Brady and his Buccaneers will take on McVay’s Los Angeles Rams at home Sunday in the NFC Divisional Playoffs. A win here, and the seven-time Super Bowl winner will end up making his 15th appearance in a conference title game. Craziness!

The XFL has signed a multi-year broadcast agreement with ABC and ESPN to televise the league’s games. Per the deal,
NFL・2 HOURS AGO
Sportsnaut

The 2000 Baltimore Ravens were a popcorn-worthy time. Long before we streamed highlights on our cell phones and could catch
BALTIMORE, MD・2 HOURS AGO

It’s been just over three months since millions of spectators witnessed Odell Beckham Jr. tear his ACL in the biggest
LOS ANGELES, CA・3 HOURS AGO
Sportsnaut

Running back Phillip Lindsay agrees to one-year deal with Colts

Two-time 1,000-yard rusher Phillip Lindsay agreed to a one-year deal with the Indianapolis Colts, his agent Mike McCartney announced on
INDIANAPOLIS, IN・7 HOURS AGO
Sportsnaut

After three seasons as a backup quarterback with Clemson, Taisun Phommachanh announced his intention to stay in the Atlantic Coast
CLEMSON, SC・1 DAY AGO

The Dallas Cowboys had an underwhelming ending to their 2021 season after getting bounced early from the playoffs. However, they
ARLINGTON, TX・6 HOURS AGO
Sportsnaut

Set to become a free agent this past offseason, the Cincinnati Bengals made sure to place the franchise tag on
CINCINNATI, OH・12 HOURS AGO

Free agent running back Tarik Cohen appeared to suffer an injury while livestreaming a workout on Instagram Tuesday. Cohen, who
CHICAGO, IL・6 HOURS AGO
Sportsnaut

Before he travels to the Bahamas to work out with new teammates, Cleveland Browns quarterback Deshaun Watson met with NFL
CLEVELAND, OH・6 HOURS AGO
Sportsnaut

Each NBA offseason, the head coaching wheel begins to spin. For the Charlotte Hornets, that process has begun to take
CHARLOTTE, NC・7 HOURS AGO
Sportsnaut

Texans QB Davis Mills to be Year 2 stand out, a look at why

Davis Mills hardly cracked into the top-10 of most analysts’ quarterback rankings ahead of the 2021 NFL Draft, but he’s
HOUSTON, TX・1 DAY AGO