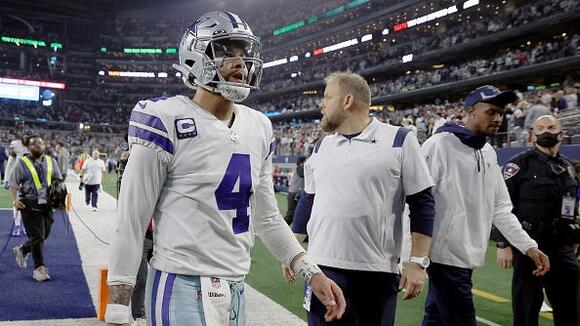 Dak Prescott’s postgame comments on the fans throwing trash at the officials is drawing the ire of an unexpected place: the NBA.

The NBA Referees Association publicly called out the Dallas Cowboys quarterback in a tweet on Tuesday and demanded that the NFL take action against Prescott.

“The NBRA condemns the comments by Dak Prescott condoning violence against game officials,” they wrote. “As an NFL leader, he should know better. We encourage the NFL to take action to discourage this deplorable behavior in the future.”

Prescott, following Sundays 23-17 playoff loss to the 49ers, was initially condemning fans for throwing trash on the field until he was informed it was directed at the officials.

Prescott has yet to apologize or take back his comments, while Cowboys executive Stephen Jones joined 105.3 The Fan on Monday and said that there is no place in the game for that kind of behavior.

While the NBA officials seem to be sticking up for their officiating brethren, there has not been any comment yet from the NFL Referees Association about the incident, which saw bottles and debris rain down on the refs as they stormed off the field.

LeBron James has taken to social media to react to the Los Angeles Lakers' head coaching hire. According to multiple reports - which appear to have been confirmed by the Lakers star - the Western Conference franchise is hiring Milwaukee Bucks assistant coach Darvin Ham. LeBron has a three-word reaction...
LOS ANGELES, CA・13 HOURS AGO
Audacy

Bruce Arians has worked with Antonio Brown at different points in the embattled wideout’s career. During an appearance on 93.7 The Fan in Pittsburgh, Arians reflected on his time with Brown and his messy, mid-game exit from the Bucs.
TAMPA, FL・2 DAYS AGO
Audacy

Former ESPN president John Skipper thinks Fox overpaid for Tom Brady, calling him an “expensive trophy.” The Bucs veteran recently signed an unprecedented 10-year, $375-million contract to join Fox as their lead analyst after he retires from the NFL.
NFL・1 DAY AGO
Audacy

CeeDee Lamb claims he grew a half-inch taller this offseason

Cowboys receiver CeeDee Lamb claims he grew a half-inch and put on 10 pounds of muscle this offseason. Lamb led Dallas in both catches (79) and receiving yards (1,102) in 2021.
NFL・1 DAY AGO

Saints legend Drew Brees seems to be at an early crossroads as he enters his second year of retirement following a decorated playing career.
NEW ORLEANS, LA・1 DAY AGO
Audacy

Pro Football Talk’s Mike Florio has an interesting theory for why Bill Belichick and the New England Patriots won’t name a successor to Josh McDaniels as offensive coordinator.
NFL・2 DAYS AGO
Audacy

Kaepernick would be a better option than any of the quarterbacks currently employed by the Seahawks, Panthers, Texans, Dolphins and Falcons, the site said.
NFL・1 DAY AGO

Derrick White perfectly summed up these Celtics with one quote

Derrick White perfectly summed up the 2021-22 Boston Celtics with one quote, saying after Friday night’s Game 6 loss to the Miami Heat that nothing comes easy for this team.
BOSTON, MA・42 MINUTES AGO
Sports Illustrated

The San Francisco slugger said that the Cincinnati outfielder accused him of bending the rules in their fantasy football league.
SAN FRANCISCO, CA・32 MINUTES AGO
Audacy

'Door is open' after Colin Kaepernick 'impressed' in workout with Raiders

"D-Wade never hits me until his voice is really, really needed. And it was." Jimmy Butler doesn’t listen much to outside noise. He does, however, value inspirational messages from people in his circle. Butler, who erupted for 47 points, 9 rebounds, 8 assists, and 4 blocks in Miami’s 111-103...
BOSTON, MA・17 MINUTES AGO

Andy Reid showers praise on Jalen Hurts amid skepticism in Philly: 'He wants to be great'

The Mavericks stunned the basketball world by knocking off the top-seeded Phoenix Suns in the conference semifinals – but apparently not everyone is convinced Dallas is ready to be a perennial contender.
DALLAS, TX・1 DAY AGO
Audacy

Travis Kelce on being underpaid: ‘Money is secondary at this point in my career’

Responding to comments made by George Kittle, who called him “criminally underpaid,” Chiefs tight end Travis Kelce insists money is secondary to winning at this point in his career.
KANSAS CITY, MO・16 HOURS AGO
Audacy

Before the two take each other on in a golf match, Aaron Rodgers had some trash talk for Patrick Mahomes. Read more on Audacy Sports.
BOSTON, MA・19 HOURS AGO
Audacy

Steph Curry's stellar defense continues to shine through for the Warriors

According to StatMuse, Steph Curry and Draymond Green allowed the lowest FG% on players with 150 shots or more throughout the course of the NBA playoffs.
NBA・12 HOURS AGO
Audacy

J.J. Watt and Zach Ertz are beefing over donuts