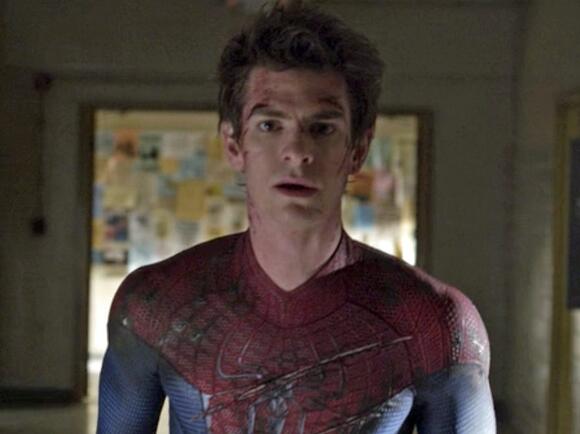 One of the funniest scenes in " Spider-Man: No Way Home " is when MJ ( Zendaya ) unexpectedly chucks a piece of bread at Andrew Garfield 's costumed Spidey, telling him to prove he's also a version of Spider-Man.

(She believes if he's really a web-crawler, he'll be able to dodge it because of his Spidey senses.)

On an episode of the " Happy Sad Confused " podcast, Garfield told host Josh Horowitz that Zendaya didn't always distrustfully throw bread his way in the sequel. The scene could've been a bit different.

"At first, Zendaya picks up a candlestick or something to like threaten me with in that first scene where I come in, but then there was this basket of bread," Garfield said of how the funny bread moment came to be.

Garfield said the entire scene felt like it was "kids just playing."

"No Way Home" puts all three of Sony's live-action Spider-Men — Garfield, Tobey Maguire, and Tom Holland — on screen for the first time .

Garfield told Horowitz that getting to reprise his role in "No Way Home" was a "healing" experience after his films came to an abrupt end.

"Coming back and actually getting some more time to have fun with it, and to give the character some closure, and to play, and to be the version of Spider-Man that I was always wanting to get to, and to be with Tobey and Tom and the rest of everybody in the movie, that was healing and just an incredible full-circle moment," Garfield said.

If you're a fan, Horowitz's almost hour-long spoiler-filled conversation with Garfield is worth a listen. You can check it out here .

Click here to read the full article. It seems like everyone was rooting for Renée Zellweger and Ant Anstead to get together, including an unexpected duo: the Property Brothers. Drew and Jonathan Scott recently revealed that they were the ones that ended up getting Zellweger and Anstead to meet, and subsequently fall in love. And their hard work ended up paying off! Back on April 14, 2022, the Scott brothers sat down with ExtraTV to talk about everything from Drew’s upcoming fatherhood to Jonathan loving GF Zooey Deschanel’s Vanity Fair gown. While we loved the entire interview, we’re losing it over...
CELEBRITIES・24 DAYS AGO
The Independent

Laughter erupted in courtroom after Johnny Depp said he doesn’t watch his own movies and couldn’t recall the question he was asked. “I don’t watch them. I feel better not watching them. What was the question again?” Mr Depp said to laughter from the room. Johnny Depp trial – latest updates“Order in the court, or I will have you removed,” Judge Azcarate said. “Understood? Thank you.”The defamation trial between Mr Depp and Amber Heard began on Monday 11 April in Fairfax, Virginia following Mr Depp’s lawsuit against his ex-wife in March 2019. Mr Depp is arguing that she defamed him...
CELEBRITIES・23 DAYS AGO
Insider

Kate Hudson has realized one of her dreams and has taken to Instagram to share the incredible news with her 15 million followers. Sharing two pictures of her looking casual in a pair of baggy dip-dyed trousers and a white tank top, and singing into a microphone, the actress announced a surprising career change.
CELEBRITIES・22 DAYS AGO

Gwyneth Paltrow is a doting mom to two teenage children, Apple and Moses, who she shares with ex-husband Chris Martin. The family are notoriously private, but over the weekend the award-winning actress gave a rare insight into their upcoming plans - and how they are changing things up this year for Mother's Day.
FAMILY RELATIONSHIPS・22 DAYS AGO
IndieWire

Click here to read the full article. Nearly 50 years after the original “Rocky” hit theaters, the classic boxing franchise keeps getting up off the mat. Ryan Coogler breathed new life into the series with 2015’s “Creed,” which followed Sylvester Stallone’s Rocky Balboa as he trained a young boxer named Adonis (Michael B. Jordan), the son of his late rival Apollo Creed. The film earned strong reviews for taking the franchise in a modern direction while maintaining what people loved about the original films, and sequels were quickly planned. When “Creed II” was released in 2018, it cemented Michael B. Jordan’s...
MOVIES・24 DAYS AGO
Insider

9 things 'Moon Knight' gets right and wrong about dissociative identity disorder, according to a mental health expert

The latest Disney+ Marvel series centers on a superhero who discovers he has dissociative identity disorder.
MENTAL HEALTH・1 DAY AGO
Insider

'Doctor Strange in the Multiverse of Madness' feels like a Sam Raimi film, not a Marvel film. Here's why that's a great sign for the MCU's future.

Disney often hires talented directors only to hinder their creativity, but Sam Raimi's "Doctor Strange" has a clear vision that the MCU needs.
MOVIES・22 HOURS AGO