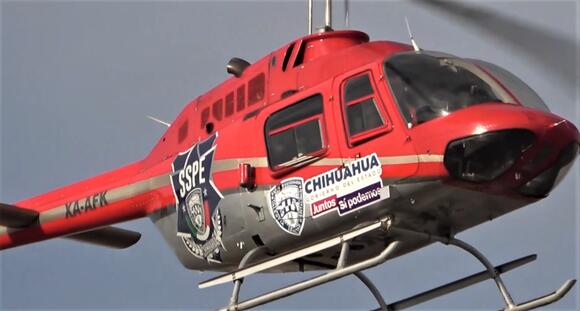 EL PASO, Texas (Border Report) – Police in Juarez have deployed a helicopter to patrol the city, given an alarming spike in criminal activity in the past few days attributed to drug cartels.

Chihuahua Gov. Maru Campos said the air surveillance is part of a new high-visibility strategy to discourage criminal gangs from acting with impunity and assist ground units in spotting or chasing suspects.

“There will be air and ground patrols. The three levels of government will strengthen their presence with more officers and more patrols in neighborhoods, particularly in high-crime areas,” Campos said on social media.

The red-colored aircraft bearing the state police logo could be seen flying over South Juarez neighborhoods on Monday and Tuesday.

This is the first time in five years that police in Juarez have resorted to air patrols. The trigger was last week’s string or intentional fires that destroyed five public transportation buses, four private vehicles, an abandoned police storefront and a convenience store.

But before and after Thursday’s fires, police have been summoned to an increasing number of presumably drug-related homicide scenes.

On Sunday, police found the dismembered bodies of two women strewn about the Juarez-Porvenir Highway. On Tuesday, another woman was killed and one more was left for dead on the streets of the Zaragoza neighborhood; the survivor has since died from gunshot wounds and injuries consistent with torture, police said.

Juarez has now recorded 65 murders in 18 days, with 11 females among the victims.

“We hope that this response from the state will help us guarantee the safety of our citizens,” Chihuahua state Secretary of Government Cesar Jauregui told reporters.

EL PASO, Texas (Border Report) – At least three large groups of migrants have turned themselves in or have been apprehended by U.S. Border Patrol agents in the past 24 hours east of El Paso. Drugs also were seized.
EL PASO, TX・2 DAYS AGO
Border Report

EL PASO, Texas (Border Report) – Overcrowding at migrant processing facilities left a bad taste in El Paso’s mouth in 2019. Reports of migrants sitting or sleeping on concrete surrounded by razor wire under the Paso del Norte Bridge while enduring cold, dust and automobile fumes circled the world. It was all due to then-existing […]
EL PASO, TX・2 DAYS AGO
Border Report

Mexican exiles in El Paso are breathing a little easier after learning that the convicted drug kingpin responsible for their flight has been moved from Juarez to a prison in southern Mexico.
EL PASO, TX・4 DAYS AGO
Border Report

With the statue atop Mount Cristo Rey in the background, a uniformed border agent gets off his patrol vehicle and yells in Spanish at the top of his lungs. “Hey! Parense!” (Hey, stop!)
EL PASO, TX・3 DAYS AGO

El Paso County Judge Ricardo Samaniego and Mayor Oscar Leeser are getting ready to issue emergency declarations as the number of migrant apprehensions continues to climb and the end of Title 42 looms.
EL PASO, TX・3 DAYS AGO
Border Report

Police in Juarez, Mexico, say they have seized the vehicle of the driver who drove past a border checkpoint and was fired at by U.S. federal officers last week at the Bridge of the Americas port of entry.
7 DAYS AGO
Border Report

Escobar: Housing migrants at Fort Bliss not an option

The largest migrant shelter network in El Paso doesn’t have enough volunteers to cope with the rising number of migrants being released by border agents.
FORT BLISS, TX・4 DAYS AGO
Border Report

Hundreds of asylum-seekers taken out of Title 42, allowed to approach El Paso ports

Federal officials have started a pilot program to take vulnerable migrants out of Title 42 protocol and allow them to approach U.S. ports of entry.
EL PASO, TX・10 DAYS AGO
Border Report

While incumbent freshman U.S. Rep. Tony Gonzales, R-Texas, has quickly secured leadership roles in House committees and caucuses, and become a leading GOP voice on border security, a Democrat is calling him out on abortion and infrastructure needs in his district.
EL PASO, TX・16 DAYS AGO
Border Report

Border agents at an El Paso port of entry on Monday mixed dialogue with a show of force to persuade a group of migrants to keep walking back to Mexico.
EL PASO, TX・20 DAYS AGO
Border Report

EL PASO, Texas (Border Report) – Expanding a port of entry in the New Mexico desert has become a priority for the U.S. and Mexico since the governor of Texas slowed commercial traffic to a crawl with enhanced trucking inspections last month.
EL PASO, TX・19 DAYS AGO
Border Report

Migrant encounters are up 58 percent in El Paso Sector

Mexican officials are reporting the capture of a La Linea cartel lieutenant believed to be behind the Good Friday massacre of six people on a highway near the U.S. border.
EL PASO, TX・26 DAYS AGO
Border Report

A coalition of migrant advocacy organizations is planning to drive the length of Texas to call for more humane border policies.
EL PASO, TX・23 DAYS AGO
Border Report

Advocates often point out that migrants fall prey to criminals on their journey to the United States. But now some of those migrants are enduring violence after they cross the border, federal officials say.
EL PASO, TX・27 DAYS AGO
Border Report

El Paso migrant advocates on Tuesday spoke out against a pair of Trump-era immigration programs as the Supreme Court weighed the legality of one – the Migrant Protection Protocols program.
EL PASO, TX・26 DAYS AGO