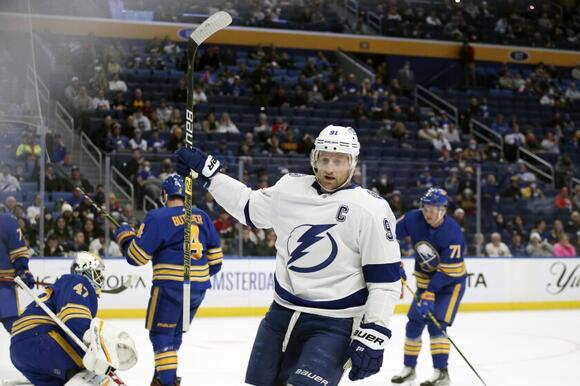 Centers Steven Stamkos of the Tampa Bay Lightning, Nazem Kadri of the Colorado Avalanche and Mika Zibanejad of the New York Rangers, and Anaheim winger Troy Terry won the final roster spots for All-Star Weekend as a result of fan voting, the NHL announced Monday.

The league said Zibanejad cannot attend the Feb. 4-5 event at T-Mobile Arena in Las Vegas for personal reasons. He will be replaced by Pittsburgh Penguins left wing Jake Guentzel, who finished second in the Metropolitan Division voting. Stamkos will join the Atlantic Division team, Kadri goes to the Central Division squad, and Terry to the Pacific.

The event features a three-game tournament played in a 3-on-3 format, with 11-man teams from each of the league’s four divisions.

Wild GM Guerin: We want both Fleury and Talbot back in net

McDavid, Gaudreau get playoff taste of "Battle of Alberta"

The Battle of Alberta returns to the playoff stage when Calgary and Edmonton meet in the second round of the Western Conference playoffs
SAN DIEGO, CA・4 HOURS AGO
San Diego Union-Tribune

Leafs staying the course after another 1st-round loss

Three huge matchups to kick off the college football season, the XFL, a new Australian Open agreement and two new "30 for 30" documentaries were announced by ESPN as part of its presentation to advertisers in New York
NFL・3 HOURS AGO
San Diego Union-Tribune

José Berríos and two relievers combined on a six-hitter, George Springer provided all the offense with a bases-loaded triple, and the Toronto Blue Jays beat the Seattle Mariners 3-0
SEATTLE, WA・1 HOUR AGO
San Diego Union-Tribune

Evgeni Malkin and Kris Letang are hopeful they can stay with the Pittsburgh Penguins
PITTSBURGH, PA・7 HOURS AGO
San Diego Union-Tribune

Celtics rule Smart, Horford out for Game 1 against Heat

Boston will be without two starters for Game 1 of the Eastern Conference finals, with Al Horford entering the NBA's health and safety protocols and Marcus Smart unable to play because of a mid-foot sprain
BOSTON, MA・3 HOURS AGO

The Los Angeles Dodgers rallied past the Arizona Diamondbacks 7-6 to begin the first doubleheader ever played by these NL West rivals
PHOENIX, AZ・3 HOURS AGO
San Diego Union-Tribune

The Orlando Magic won the NBA draft lottery and landed the No. 1 overall pick for the first time since they got Dwight Howard nearly two decades ago
ORLANDO, FL・36 MINUTES AGO

DeWanna Bonner made her season debut for Connecticut and scored 12 of her 16 points in the decisive first half and the Sun beat the New York Liberty 92-65
SAN DIEGO, CA・1 HOUR AGO