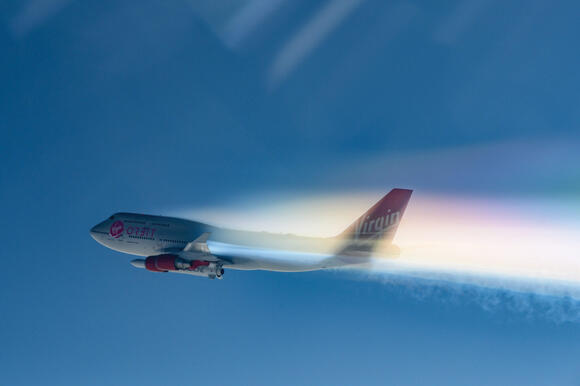 Virgin Orbit’s Cosmic Girl flies through the air carrying a LauncherOne rocket during the “Above the Clouds” mission Thursday, Jan. 13, 2022. Courtesy of Virgin Orbit.

The mission, “Above the Clouds,” delivered satellites for experiments in space-based communications, space debris detection and in-space navigation and propulsion, as well as some to be used by the global agricultural sector. The U.S. Department of Defense, the Polish company SatRevolution and Spire Global had payloads aboard the mission.

The January mission was originally slated to be the company’s final flight of 2021—with the rocket delivered to the Mojave Air and Space Port in November . Final preparations, however, pushed the mission into this year.

“Our customers are starting to hear back from their satellites that are checking in from orbit—and for us, that’s what success looks like,” CEO Dan Hart said following the mission’s success. “It’s a thrill for our team that this mission included our first repeat customers as well as our first ‘last minute ticket’ customers.”

The mission deployed its payload into orbit 500 kilometers above Earth’s surface at a 45-degree inclination, making it the first launch in history to reach said orbit from the West Coast, according to the company.

While space launches historically take off from a stationary, land-based pad, Virgin Orbit’s LauncherOne rocket is deployed from a modified Boeing 747 aircraft during flight. The most recent mission took off from the Mojave desert at 1:39 p.m., flying to its airborne launch site 50 miles south of the Channel Islands.

Previously unavailable to land-based launches, the trajectory Virgin Orbit launched “Above the Clouds” saved the satellites months of time and kilograms of fuel they otherwise would have spent correcting their orbit if launched from land, the company stated.

Before deploying the LauncherOne, the Boeing aircraft was able to fly through weather and a cloud layer that would have grounded a normal launch during the Jan. 13 mission, Hart said.

“We can say with confidence that in this new era of regular, frequent, successful missions, we can help our customers and partners use space technology to advance human knowledge and open space for good.”

The mission was named after the fifth track on Gang Starr’s album “Moment of Truth,” which featured Inspectah Deck of the Wu-Tang Clan. The record was released in 1998 by Virgin Records in collaboration with Noo Trybe Records.

“Above the Clouds” was Virgin Orbit’s third successful mission. The first came almost exactly one year ago when the company delivered nine satellites into space on Jan. 17, 2021.

The firm has delivered 26 satellites to orbit.

Virgin Orbit has five more launches slated for this year, according to the firm.

A plethora of downright bizarre scientific research from the Department of Defense previously kept under wraps has been uncovered, revealing an array of peculiar schemes proposed by the United States military. One outlandish proposal suggested detonating nuclear bombs on the moon to create a tunnel through it. Millions in taxpayer dollars were spent on the research, which appears to have relied on a contractor, Bigelow Aerospace Advanced Studies, which was owned by multi-millionaire Robert Bigelow, a hotel impresario. The public was kept in the dark until now regarding what research was being funded.
ASTRONOMY・22 DAYS AGO
Business Insider

A member of a superyacht crew also told The Times of London that one owner had his bar stools made from whale foreskin.
BOATS & WATERCRAFTS・25 DAYS AGO
WashingtonExaminer

Australian Prime Minister Scott Morrison warned China and the Solomon Islands against allowing a Chinese naval base on the islands, saying it was a "red line."
POLITICS・24 DAYS AGO
The US Sun

EXTREME heat as high as 100-degrees mixed with the yearly Sahara dust clouds will create dangerous respiratory conditions for millions of Americans across the southern US. The large dust plumes that form over Africa's Sahara Desert will travel over the Atlantic Ocean and make their way to the US Gulf Coast by the weekend.
FLORIDA STATE・20 MINUTES AGO